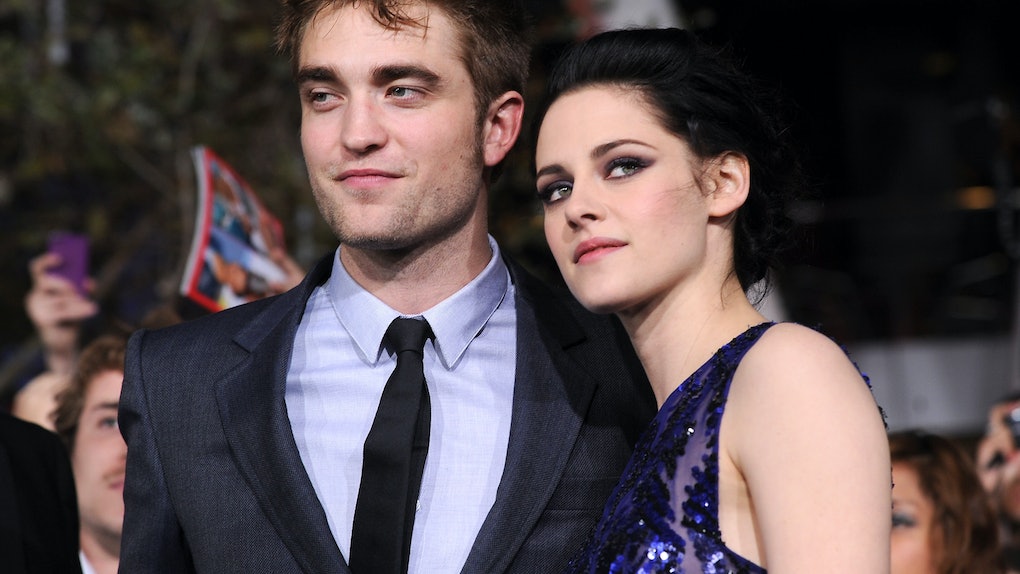 Rob Pattinson & Kristen Stewart Were Spotted Hanging Out, So Prepare To Scream

I was never a huge fan of the Twilight series because vampires terrify me. Nonetheless, I was always a fan of Kristen Stewart and Rob Pattinson's off-screen romance. I think my affinity towards them as a couple was for no real reason other than the fact that they kind of looked alike, they clearly had sexual chemistry on screen (the only reason I watched the movies in the first place) and, well, that's pretty much it. That being said, my middle school self was devastated when they split, and now that Rob Pattinson and Kristen Stewart were spotted hanging out, my adult self is having a FIELD DAY.

I swear, you guys, we didn't just hop aboard a time machine back to 2010. This is actually something that's happening in 2018. The Daily Mail reports that the exes were spotted at a 19th birthday party for Lily-Rose Depp. Yes, that's right. While you and your ex ran into each other at, like, your high school reunion at your town's local dive bar, they casually run into each other at star-studded celeb birthday bashes at the famed Chateau Marmont. Because of course.

Anyway, back to the matter at hand. According to the Daily Mail, the two were spotted talking by a car outside of the party. They even have pics of the two engaging in some chill, laidback conversation and claim that there are "reports of reconciliation." So... are they back together?! Um, well, A GIRL CAN DREAM.

Of course, I'm not the only one dreaming about this potentially amazing reunion. Fans have obviously taken to Twitter to share their opinions on the matter.

People have been waiting for this day for a while.

Twilight fans are understandably fuh-reaking out.

It literally feels like we all stepped in a time machine.

Needless to say, there were still some haters.

Obviously, this news comes as a bit of a shock for a couple of reasons.

First and foremost, both Robert and Kristen have reportedly moved on from each other. In fact, the Daily Mail reports Pattinson was "kind of engaged" to FKA Twigs for three months before the couple called it quits in October 2017.

And, of course, Kristen has recently been dating women. The star literally said, "I'm like, so gay dude" on SNL. So that settles that. She also has been linked to Stella Maxwell for awhile now.

That being said, she's not totally ruling out dudes forever. She used an epic grilled cheese analogy to explain her sexuality in an interview a while back. “Some people know that they like grilled cheese and they’ll eat it every day for the rest of their lives. I want to try everything,” she told Harper’s Bazaar U.K. in September. “If I have grilled cheese once I’m like, ‘That was cool, what’s next?’”

So... what's consensus here? Well, as much as I'd LOVE IT if this really was a reunion between the two ex lovers, I think this could have actually just been a casual chat because they both seem like they'd be chill people who can handle ~casual chats~ with their exes rather than, say, suddenly bursting into tears at the sight of them.