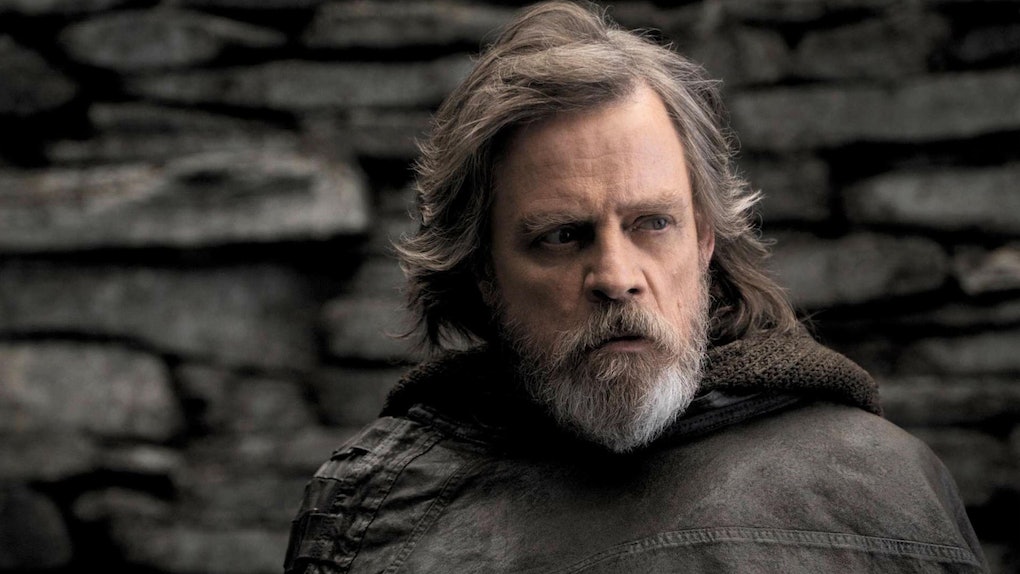 The biggest, most shocking moment in Star Wars: The Last Jedi is undoubtedly Luke Skywalker's major final scene, which may leave audiences with a ton of questions about the iconic Jedi's future in the franchise. Luke's new mysterious, hermit-y new vibe has been a source of a ton of fan confusion since he first popped up at the very end of 2015's The Force Awakens, but the new movie leaves his fate even more uncertain. So did Luke Skywalker die at the end of Star Wars: The Last Jedi? Let's break down the new movie's most pressing question. Spoiler alert: Of course, don't read on if you haven't seen The Last Jedi for yourself yet.

So, Luke Skywalker spends the bulk of The Last Jedi saying no. He refuses to rejoin the Resistance; he refuses to train Rey; he refuses to forgive himself for failing Kylo Ren. Luke reveals to Rey that he has subjected himself to exile on the island planet Ahch-To after Kylo Ren turned to the dark side while still under his Jedi tutelage. Seeing the darkness rise in his nephew, Luke admits that he felt he had no way of stopping it, and even drew his lightsaber on a sleeping Kylo the night that the boy finally destroyed Luke's Jedi temple and left for the dark side. It's this event that has kept Luke alone on this remote island, saddled with guilt, for all of these years. But in the very end, Luke does finally come around to helping out his sister Leia and her band of rebels.

After some inspiring words from the spirit of his old master Yoda, Luke realizes that it's time to stop dwelling on his past failure and start being there for the people that really need him... although, not like, physically there. Apparently, Luke is so strong with the Force now that he can fully astral project (yeah, I didn't know Jedis could do that either), and he sends an image of himself to face off against Kylo Ren as a distraction so that the trapped Resistance can make an escape. The result is a truly epic lightsaber duel, and an incredibly satisfying reveal when Kylo realizes that he has been fighting an astral projection and can't actually harm Luke Skywalker at all. Cut to Luke meditating on his remote island cliff, safely lightyears away from all the action in the movie, as always.

But despite his incredible new power, even Luke Skywalker has to say goodbye some time. After the rebels make their escape and Kylo Ren realizes he's been tricked, Luke ends his meditation and stares off into the sunset before disappearing. At the same time, both Rey and Leia share that they felt him go away, though peacefully, as Rey notes. As fans of the franchise know, this is how Jedi typically die... or rather, return to the Force. In A New Hope, Obi-Wan Kenobi similarly disappeared into his cloak when struck by Darth Vader's lightsaber, and then in The Return of the Jedi, Yoda passes over in a more similar fashion to Luke, as he peacefully lays down on his bed and disappears. It seems clear that Luke has followed the same fate as his two Jedi masters before him, also disappearing into the Force.

So that leaves us with the question of whether Luke Skywalker is totally gone or not. After all, Obi-Wan Kenobi and Yoda both returned as spirits multiple times after their deaths, so it's definitely a possibility for Luke to do the same in Episode 9. We will just have to wait and see if spirit-Luke pops up or not.