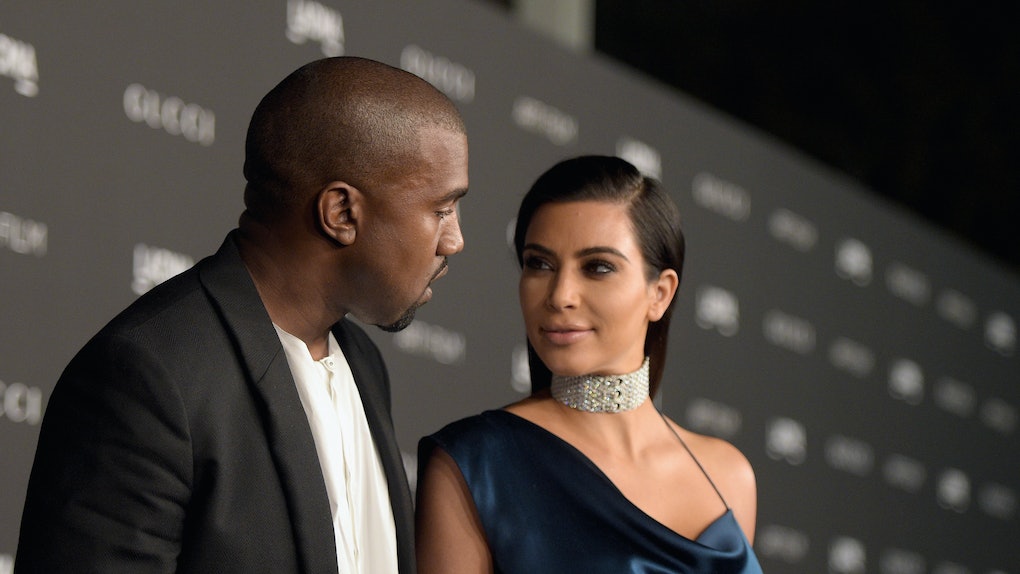 Is Kim Kardashian Having A Fourth Baby? Sources Say She Wants To Grow Her Family

It feels like just yesterday North West was born. Since her arrival, Kim Kardashian and Kanye West have had two other children. Their most recent daughter, Chicago West, was born via surrogate on Jan. 15, and the world hasn't been the same since. Fans are so excited for this growing family, which leaves everyone wondering, is Kim Kardashian going to have a fourth baby? I know it might be pushing it, but sources suspect she is already talking about having more kids and may be considering using another surrogate.

UPDATE: Kim Kardashian West has broken her silence on the rumors that she's already considering using a surrogate to have a fourth child. The star re-tweeted the report from The Daily Mail on Jan. 24 and simply wrote, "fake news."

EARLIER: Kardashian made the decision to use a gestational carrier after her doctors explained carrying another child would be dangerous to her health. Kardashian suffered from two serious pregnancy conditions called preeclampsia and placenta accreta, both of which are risky for her and her baby. She announced she was hiring a surrogate on Keeping Up With The Kardashians, and a few months later, fans were relieved to hear Chicago arrived happy and healthy. Now, new sources are saying Kim is already thinking about going through the process again for baby number four.

A source close to Kardashian and her family recently filled People magazine in. The insider said, "Even before Chicago was born, Kim was talking about asking the surrogate to carry her next baby." The source added,

It makes sense that Kardashian wants a large family. She is one of six siblings, after all. The family friend also said, "Kim definitely wants more kids. She is so happy being a family of five. She wants the family to get even bigger!"

Initially, Kardashian spoke about how difficult the surrogacy process was, despite the public's assumptions. She also penned a thoughtful message on her app and website discussing what the journey was like for her and her family. Kim wrote,

I have always been really honest about my struggles with pregnancy. Preeclampsia and placenta accreta are high-risk conditions, so when I wanted to have a third baby, doctors said that it wasn’t safe for my — or the baby’s — health to carry on my own.

She also explained the difference between a traditional surrogate and a gestational carrier, which is what she and West decided on.

After exploring many options, Kanye and I decided to use a gestational carrier. Although I have used the term surrogate in the past, a gestational carrier is actually the technical term for a woman who carries a baby that she has no biological relationship to. A traditional surrogate donates her egg, is artificially inseminated with the father's sperm and then carries the baby to term. Since we implanted my fertilized egg in our gestational carrier, our baby is biologically mine and Kanye’s.

Later in her message, Kardashian spoke again about some of the unexpected challenges that popped up for her throughout their surrogacy journey.

Having a gestational carrier is definitely different, but anyone who says or thinks it’s the easy way out is completely wrong. People assume it’s better because you don’t have to deal with the physical changes, pain or complications with delivery, but for me it was so hard to not carry my own child, especially after I carried North and Saint.

She concluded with how grateful she felt, which makes us believe this is something she would be open to doing again.

I'm so grateful for modern technology and that this is even possible. It’s not for everyone, but I absolutely love my gestational carrier and this was the best experience I've ever had. Our gestational carrier gave us the greatest gift one could give. The connection with our baby came instantly and it's as if she was with us the whole time. Having a gestational carrier was so special for us and she made our dreams of expanding our family come true. We are so excited to finally welcome home our baby girl.

Now, the family is enjoying time at home relaxing with their new daughter.

One thing is clear: This family has no intentions to stop growing. I can't wait for Season 52 of Keeping Up With The Kardashians, assuming Chicago, Saint, and North will have taken over the world by then.