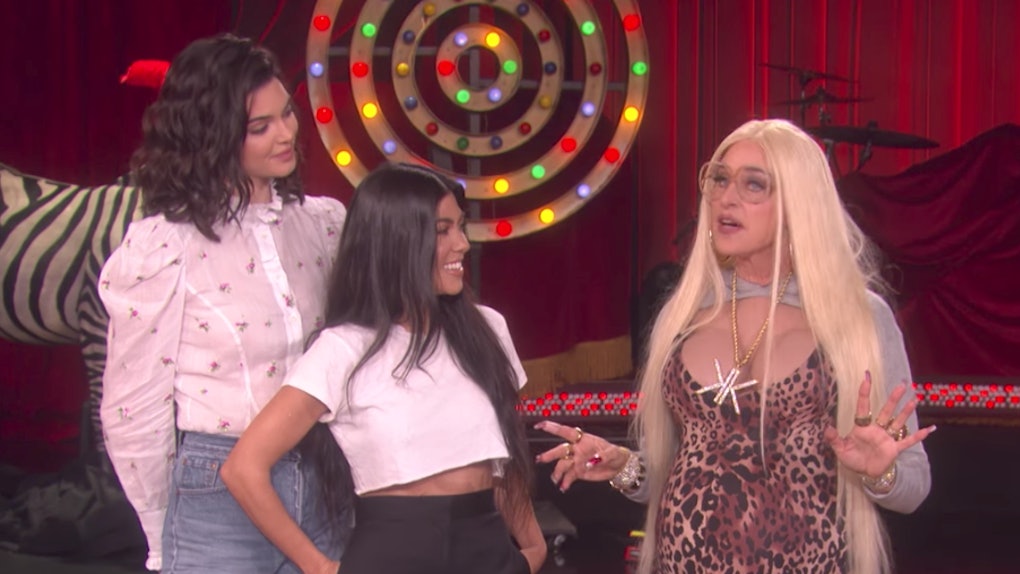 Is Kendall Jenner Pregnant? Star Shuts Down Rumors On 'The Ellen DeGeneres' Show

Let me be the millionth person to say that all of the Kardashians are pregnant all of the time, and if you haven't heard that by now, you can just get out. Sisters Kylie Jenner and Khloé Kardashian are reportedly due in February, and Kim Kardashian confirmed she is having a third baby sometime this winter, reportedly via surrogate. It was only a matter of time before the rumor mill turned on the rest of the sisters. People have been asking, is Kendall Jenner pregnant? And what about the seemingly most fertile sister, Kourtney? Well, they're here to tell you and Ellen DeGeneres — hell no. Stop it.

In maybe the most awkward segment of all time, Kourtney and Kendall joined Ellen on her Halloween episode to stop rumors once and for all. (Well, at least about themselves... still zero-point-zero word about Kylie and Khloé.)

In the segment, Ellen does her bizarro impression of the long-lost fictional Kardashian sister Karla, and makes everyone uncomfortable. For some reason, she dresses up in a revealing fake body suit, complete with a massive baby bump and animal print unitard. Rocking fake nails, long blonde hair, and massive glasses, she launches into a rambling message about how she knows Kendall and Kourtney are pregnant.

Here. Enjoy the seven most uncomfortable minutes of your life.

First of all, Kendall is so much taller than I even knew, like in a truly alarming way. I've watched her walk out, like, seven times and it gets more fascinating with each play.

Second of all, why the fake cross-eyed basketball player? Who are we poking fun at here? What is happening?

Third of all, OK, we get it. These two aren't pregnant. Please don't ever make us go through something like this again.

Ellen — I mean Karla — sets up the segment by explaining,

So, we all know that Kim is expecting, right, and everyone’s talking about Khloé and Kylie being pregnant. But I have breaking news, and I’m not supposed to tell anybody but I don’t care 'cause I’m a part of the family... Kourtney is also pregnant as well!

Kourtney then sashays out, smiles a lot, and quietly says, "Stop making up rumors up about me. I'm not pregnant."

Ellen (slash Karla) then tries to keep things moving — because Lord help us, it's all burning around her — and says, "I confused you with Kendall because Kendall is pregnant and I know that for a fact. That one is true."

Kendall walks in like a glorious Amazon fantasy creature, and very profoundly exclaims, "I’m not pregnant, either though. You’ve got to chill, because I'm not pregnant."

Honestly? Everyone needs to chill. This segment was a nightmare, and not in the fun Halloween kind of way.

For some reason, the segment then continues for another three and a half whole minutes.

Karla brings out her fake boyfriend and basketball player, Ja'lille O'Neal, and Kendall and Kourtney stand there weirdly giggling and secretly praying for the camera to release them from this hell hole.

I want to stop the video, but also can't look away.

All of this to once again not confirm what's actually up with the sisters who are actually rumored to be pregnant: Khloé and Kylie.

However, fans are in luck as the Kardashians just recently signed a $150 million dollar deal with E! Entertainment to continue their show for another five seasons, carrying the series into 2019. At some point, the big question of who is and who is not pregnant must be answered during that time, because that's how science works.

Thanks for nothing, Karla.