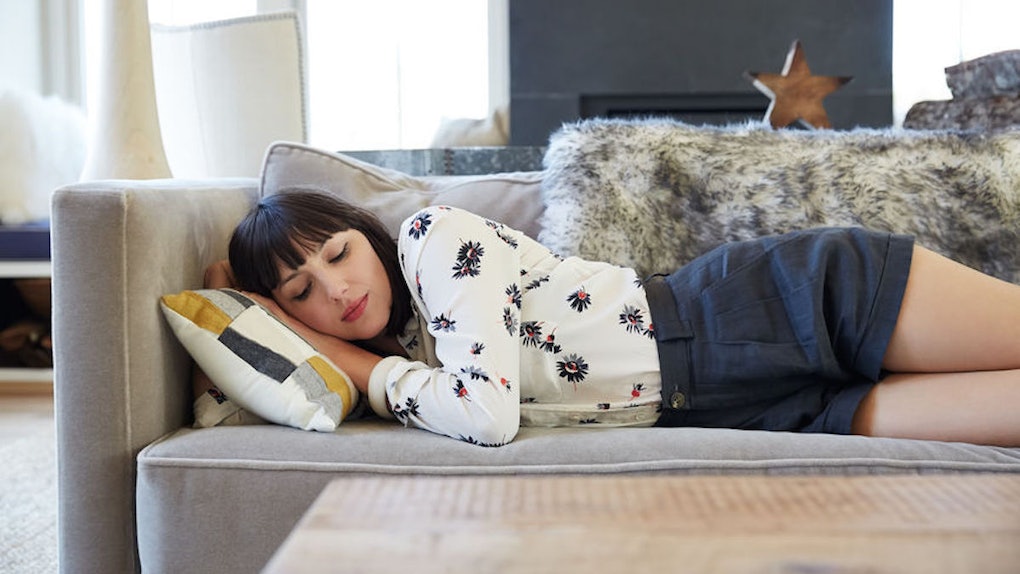 Is It OK To Nap With Your Contacts In? Experts Say It's Best Not To & Here's Why

Imagine this: a warm Saturday afternoon with no more chores to check off of your to-do list. You have no plans, no responsibilities, nothing to worry about except enjoying the time to yourself. If you're anything like me, this kind of day can nudge you into an impromptu, refreshing nap in no time at all. But, for some people, drifting off isn't as simple as just closing your eyes. If you aren't lucky enough to have 20/20 vision (same, friend), you've probably wondered whether it's OK to nap with your contacts in. Not to scare you too much, but according to experts, taking your contact lenses out of your eyes is one pre-nap ritual you should definitely be sure to make time for.

If you feel guilty about occasionally drifting off while leaving your contacts in, you're definitely not alone. According to a 2016 report from the Centers for Disease Control and Prevention, an online survey of about 4,500 adults and 1,600 adolescents showed that 81 percent of young adults engage in at least one "risky contact lens behavior" (such as snoozing with their lenses still in their eyes) that could make them vulnerable to infection. And among young adults and older adults, the survey found that the most frequently reported risky behaviors included sleeping or napping in lenses. So, yeah, most of us are guilty of doing this, it seems.

But how dangerous is it really to doze off with your contact lenses still in your eyes? Well, before I get into the explanation, let me warn you that things are about to get a little gross. According to eye surgeon Dr. Ming Wang of Wang Vision Institute, contact lenses are generally safe when you wear them appropriately. "When they are not [worn appropriately]," he tells Elite Daily over email, "risks can be major and vision-threatening, including painful and aggressive infections that require urgent treatment." The worst of these repercussions includes something called acanthamoeba, Dr. Wang explains, which is an aggressive parasitic infection that the eye surgeon says will almost always affect those who wear their contact lenses incorrectly.

But why exactly is it so bad for your eyes to wear your contacts while you sleep? “It’s like having a plastic bag over your head when you sleep,” Dr. Rebecca Taylor, an ophthalmologist based in Tennessee and spokesperson for the American Academy of Ophthalmology, told Huffington Post back in 2014. Basically, Taylor explained, when you're awake and blinking, your contacts shift slightly on your eyes, allowing oxygen to reach different places. But if you're sleeping in contacts with your eyes closed, there's no oxygen exchange happening, which is not good at all for the health of your eyes.

Of course, sometimes, you're in a bind, and you don't really have a choice between sleeping in your contacts and dumping them into your friend's garbage, all because you simply forgot to bring contact lens solution and a case to a sleepover. In these cases, is it ever OK to sleep in your contacts?

According to S. Barry Eiden, O.D., F.A.A.O., a doctor of optometry and president and medical director of North Suburban Vision Consultants, you only get a pass in certain circumstances. Sometimes, he tells Elite Daily over email, the risk of sleeping with your contacts in isn't as bad as the alternative option — for example, when you don't have access to contact lens solution and you have no other vision correction (or glasses) with you to help you see properly. That might be a time when you wear your lenses — if approved to do so — overnight, Eiden says, though he adds that the key phrase here is "approved to do so."

And if you wake up in a panic, realizing you forgot to take out your contacts before crashing the night before? First, check to see if you're experiencing any symptoms of infection. “Take the contact lens out, but keep it, don’t throw it away,” ophthalmologist Allison Babiuch, M.D., told Cleveland Clinic. “Put it in a contact lens case and bring it with to your appointment because if we do see signs of an infection we can culture the contact lens itself also.” Decreased vision, redness, eye-watering, and discharge are all potential signs of an infection, Babiuch told the medical center.

Additionally, Samuel Pierce, O.D., an optometrist who serves on the American Optometric Association Board of Trustees, tells Elite Daily that if you accidentally doze off with your contacts still in your eyes, "clean them thoroughly with contact solution (not tap water)" once you're awake, "and take a break from wearing your lenses for a while, allowing your eyes a chance to recover." Allowing your eyes a little bit of time to breathe and soak up some of the oxygen in the air, he explains, will be very helpful.

Finally, here's one glimmer of hope I can leave you with: According to Dr. Eiden, your contacts may, in fact, be approved to sleep in: "Some contact lenses have been designed and FDA-approved for overnight wear, including napping," he tells Elite Daily. "However, closed-eye wear of contacts always increases the risk of infection and inflammation."

So, if you just can't remember to take our your contacts before taking a well-deserved nap, give your optometrist a call and see what they say. If you get lucky, you just might get the go-ahead.