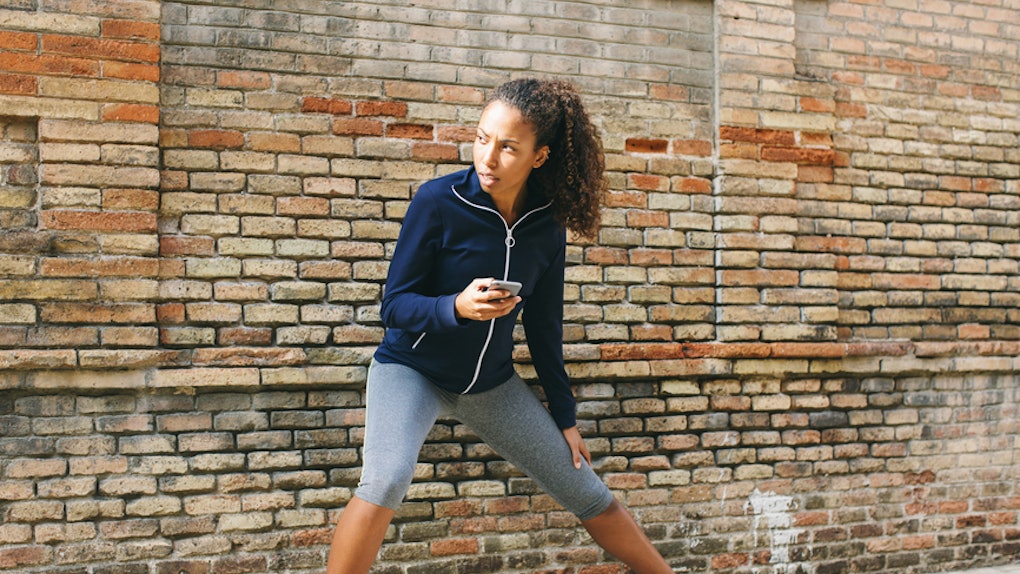 Is It Bad To Work Out When You're Tired? Here's Why You Shouldn't Lift On A Lack Of Sleep

If you love doing your workout in the early morning hours, you've probably experienced the excruciating feeling of trying to wake up for a sweat sesh after you've been tossing and turning all night long without a wink of sleep. Maybe you've been able to coax your bleary-eyed self to the gym in these instances, but you always felt like absolute crap in the process, and you realize now it's probably not a good thing that you nearly fell asleep on the stationary bike that one time. While working out when you're tired isn't necessarily the worst thing in the world, there are different degrees of fatigue that you should be mindful of when it comes to your sweat sessions.

First of all, you should definitely be able to distinguish the difference between being legitimately tired and being low-key lazy. You know your body best, my friend, so you'll know when you're letting little things like traffic or a temporary bad mood totally derail your workouts, as opposed to a genuine lack of quality rest.

If you're feeling both mentally and physically exhausted from lack of sleep, it's probably best to skip out on your scheduled sweat sesh for the day — yes, even if you paid for it.

According to the National Sleep Foundation, getting seven to nine hours of sleep per night is recommended for optimal mental and physical health. If you know for certain you're already on top of getting the proper amount of shut-eye, Shannon Fable, the former director of exercise programming at Anytime Fitness, told Shape that you're in the clear to hit the gym.

However, if you were up all night trying to catch some Zs, and you're positive you didn't hit those coveted eight or so hours, it's best to stay in bed for some additional, glorious sleep and avoid any form of strenuous exercise, according to LIVESTRONG. The reason why this is so important is because, if you attempt an intense HIIT circuit or a challenging cardio routine when you can barely keep your eyes open, you might be too careless and distracted to execute the movements properly, and you really could hurt yourself.

Personal trainer and fitness video pioneer, Cathe Friedrich, cautioned in a blog post on her website that exercising while you're sleep-deprived can be so bad for your body that it can actually derail your immune system defenses, hurt your body's ability to repair your muscles, and interfere with your cognitive function — meaning, again, your fuzzy, tired brain could cause you to inadvertently injure yourself while you're trying to navigate the weight rack through droopy eyes.

To understand just how strong the relationship is between fitness and sleep, a 2009 study by researchers at Stanford University showed how you can actually improve your workouts by clocking in more snooze time.

The New York Times reports that the small study looked at five athletes on the women's tennis team at Stanford University. The women were told to maintain their normal training schedules for two to three weeks without changing their usual amount of sleep. After those few weeks had passed, they were tested with sprinting and hitting drills as a performance marker.

For the next part of the experiment, the players extended their nightly sleep schedule to 10 hours for an extended five to six weeks. After getting much more sleep on a consistent basis, the athletes were tested with the same initial drills, and according to The New York Times, the results showed that the women performed significantly better when they were getting more sleep. Now, this study's sample was pretty small, but even so, the results don't lie, people. Sleep truly is the real MVP.

Of course, getting enough shut-eye is often easier said than done, but there are plenty of steps you can take to increase both the amount and the quality of your nighttime rest, and in turn, make sure you're always able to make that morning cycling class.

For starters, make sure you're not taking electronics to bed with you, so that the blue light behind your technology won't stimulate your brain and keep you wide awake. You can also add some soothing essential oils or calming breathing techniques to your nighttime routine to make sure you're sleeping soundly through the night.

If you implement these small changes into your bedtime routine, you'll be on the road to sleeping like a baby in no time. Then, you'll be able to bask in the glory of a balanced workout and sleep schedule, without having to compromise one over the other.