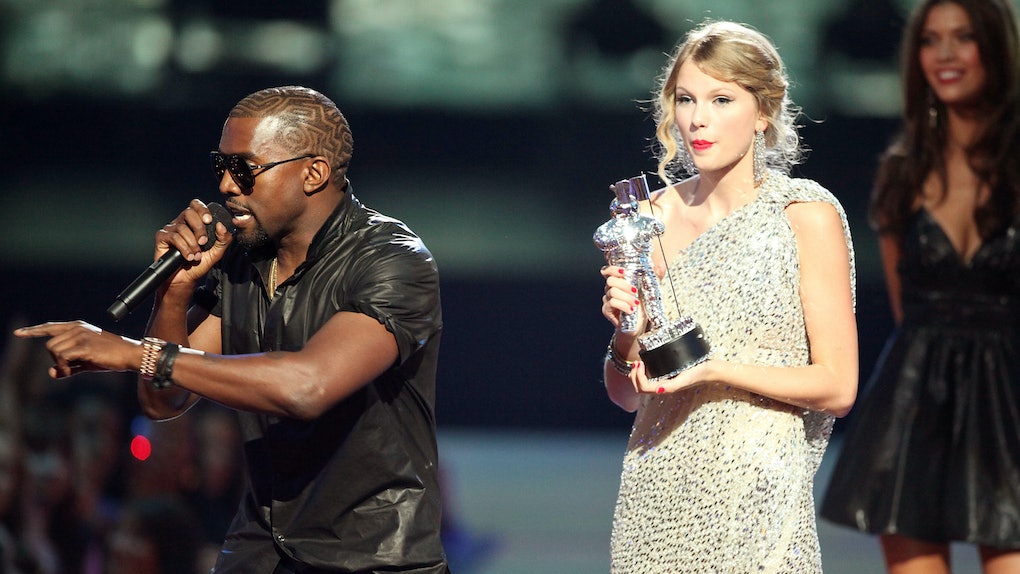 Is "I Forgot That You Existed" About Kanye West? Taylor Swift's New Song Hints At The Feud

Is it happening? Is Taylor Swift finally removing herself from this narrative, one she never asked to be a part of, since 2009? It's possible. The opening track to her new album Lover feels extremely significant, leaving people wondering: Is "I Forgot That You Existed" about Kanye West? My money is on him, but then again, I think almost everything Taylor Swift does somehow circles back to Kanye West.

Exactly 10 years ago, West jumped on stage at the 2009 VMAs to pull the microphone out of Swift's hand to denounce her award win for Best Female Video, famously shouting, "Yo, Taylor ... I'mma let you finish, but Beyoncé had one of the best videos of all time." It was... not great, and it ultimately launched one of the most famous celebrity feuds to date. There were failed attempts at reconciliation over the years, but things took a nasty turn when West dropped his song "Famous" in 2016. The song includes the lyrics, "For all my Southside [friends] that know me best, I feel like me and Taylor might still have sex. Why? I made that b*tch famous."

When it came out, Swift was obviously less than pleased, which prompted West's wife Kim Kardashian to leak a video of West and Swift discussing the song on the phone. This was also the catalyst for all of the snake stuff, which Swift would later use as a cornerstone for her Reputation era. Kardashian began the trend by using a snake emoji reportedly in reference to Swift, which she then capitalized on and turned into money, honey. (Man, gotta love a good PR team, ya know?)

OK. So, here we are in the Lover era, which noticeably features imagery of a slithering snake morphing into rainbow-colored butterflies. You see it in the beginning moments of Swift's "ME!" music video, and as an extensive back tattoo in the video for "You Need To Calm Down." Now, fans are reading into the lyrics in Lover's first song, "I Forgot That You Existed." The opening lyrics talk about Swift reflecting on the hard life-lessons someone taught her, catching shade, and perhaps most noticeably, Drake (another one of Kanye's famous frenemies).

Here are the opening words:

How many days did I spend thinking / Bout how you did me wrong, wrong, wrong? / Lived in the shade you were throwing / Til all of my sunshine was gone, gone, gone / And I couldn't get away from ya / In my feelings more than Drake, so yeah / Your name on my lips, tounge-tied / Free rent, living in my mind

Come on, that's not too hard of a jump, right?

In her second verse, she sings the lyrics "Would've been right there, front row / Even if nobody came to your show," which sounds like it could also be directly addressing West, who is a performer himself and has his own shows. Fans chimed in on Twitter, too.

More than anything, to me, the most tell-tale clue that this song could be about Kanye West is that it is the very first song on the new album after Reputation, which was one big nod to all the West/Kardashian drama, as I mentioned. It seems to me she is sending a clear message that she is truly moving on and taking on new topics (like equality and justice) and returning to her bubbly, optimistic routes.

All is well that ends with extensive fan think piece, right?