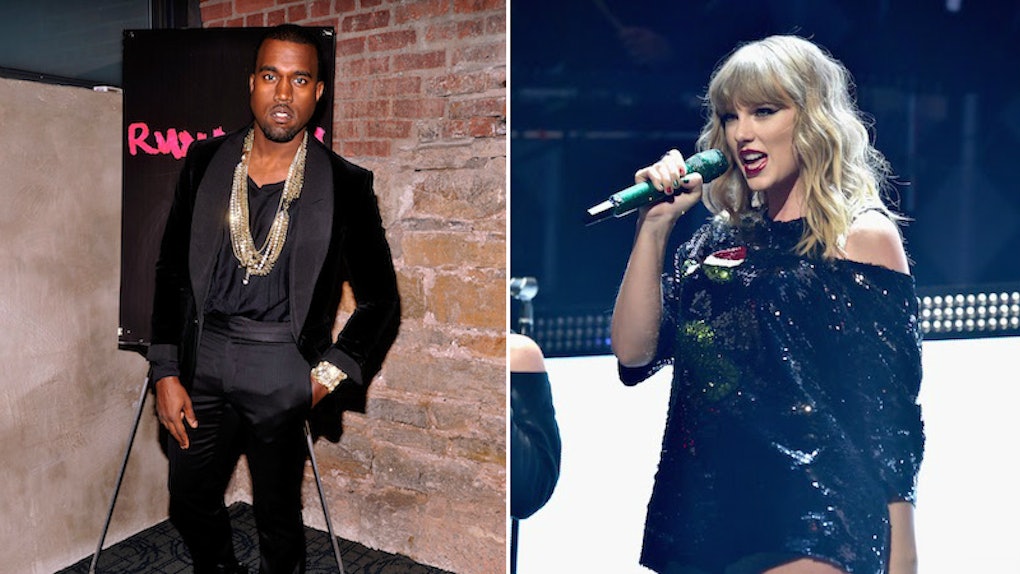 The first thing that I think of when someone mentions Kanye West will now and forever be Poopy-Di Scoop, because "Lift Yourself" has rocked my entire world. But with West's return to Twitter and the release of his new music, some fans have been confused, while others are just straight-up concerned, because West's antics seem startlingly similar to his breakdown back in 2016. And now, in an interview with Charlamagne tha God, Kanye West blames the "Taylor Swift moment" for his music not making it to radio (alongside many other revealing personal truths) and let me tell you, the whole thing is intense.

West's interview with Charlamagne tha God on Tuesday, May 1, was incredibly eye-opening for many Yeezy fans. He explained what led to his hospitalization in 2016, his current relationship with JAY-Z, and, of course, what happened after his "Taylor Swift moment."

Now, if you don't recall, let me fill in the blanks for you:

West and Swift have never been quite the same ever since West's 2016 album, The Life of Pablo, featured a track which gave Swift a shout-out. The song, "Famous," has a line that struck an angry chord with Swift and her fans. The lyrics go:

From there, chaos ensued, with West and wife Kim Kardashian explaining that they got Swift's approval for using that lyric in the songIn an interview with GQ, Kardashian said,

She totally approved that ... She totally knew that that was coming out. She wanted to all of a sudden act like she didn't. I swear, my husband gets so much sh*t for things [when] he really was doing proper protocol and even called to get it approved. What rapper would call a girl that he was rapping a line about to get approval?

Where in the video of Kanye telling me he was going to call me ‘that b*tch' in his song? It doesn't exist because it never happened. You don't get to control someone's emotional response to being called ‘that b*tch' in front of the entire world. Of course I wanted to like the song. I wanted to believe Kanye when he told me that I would love the song. I wanted us to have a friendly relationship. He promised to play the song for me, but he never did. While I wanted to be supportive of Kanye on the phone call, you cannot ‘approve' a song you haven't heard.

West and Kardashian then released a video recording seemingly showing Taylor Swift acknowledging and approving the "Famous" lyrics before the track was in the public eye, and, because of that, West believes that it's the reason his music is not played on the radio.

Ever since the Taylor Swift moment, it's never been the same, connection with radio. Whatever powers that be, it was much harder after that ... If you popular, if you poppin', you know, if you're one of the most famous people on the planet and people love your music and all the best artists in the world are coming to your concert ... it seems like, OK, radio should just be in tact. And it might be just a piece of information that I was missing, that wasn't being expressed to me that I didn't understand. Because at the end of the day, someone was controlling it, and I didn't understand it. But the radio element was just one of the factors.

While some might think this is another Kanye West rant (because that can sometimes feel like that's all he does), he does have a bit of a point. Kanye West drops some pretty great music, but I rarely hear it on the radio. But Taylor Swift? Chances are that you'll hear her music on almost every single hit radio station at least once a day, and that's a minimum wager, folks.

If you need me, please don't look for me, as I'm doing my best to avoid any questioning. Thanks!