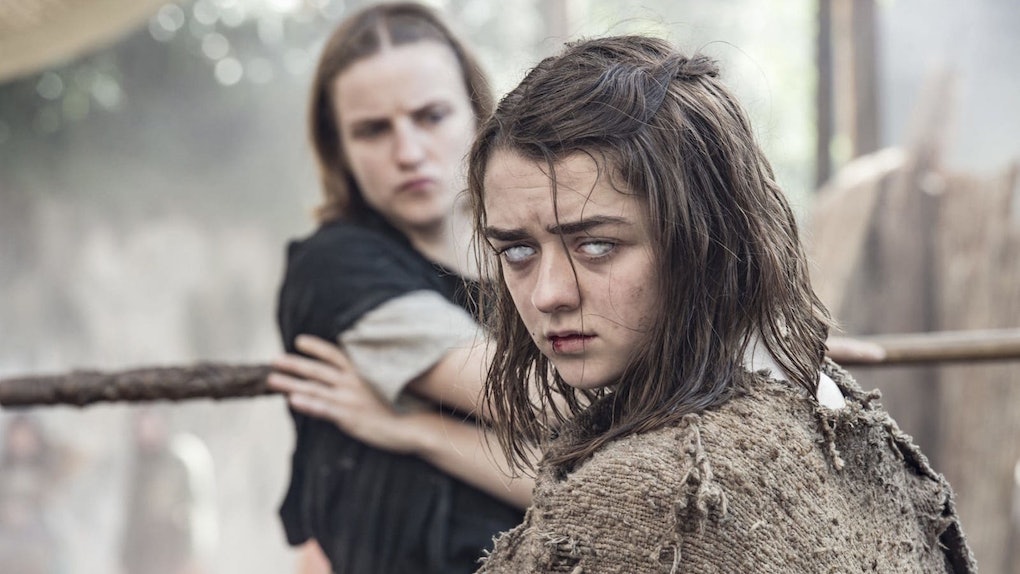 Is Arya The Waif On 'Game Of Thrones'? Fans Are Speculating After Seeing Season 8 Episode 2

Arya Stark had a big night in Sunday's latest episode of Game of Thrones, and one scene in particular raised a ton of questions about her true identity. Because of Arya's deceitful ability to change her face, there has been a theory floating around the fandom for a while now that the Arya we know now may not actually be the youngest Stark sister at all, and a small moment in Episode 2 is making that theory even more convincing. So, is Arya the Waif on Game of Thrones? Her scars may be the key to finally clarifying this wild fan theory.

Spoiler alert: This post contains spoilers from Game of Thrones Season 8 Episode 2, "A Knight of the Seven Kingdoms." In this week's new episode, Arya spent her final moments before the Night King's army arrived at Winterfell with her old pal Gendry. After the season premiere hyped fans up for the possibility of Arya and Gendry getting together, Arya cut through their romantic tension by seducing him and having sex for the first time with Gendry. While it was definitely the steamiest moment of the whole episode, one very quick shot in the scene has resurrected a fan theory that Arya may actually be the Waif in disguise.

As Arya disrobes in front of Gendry, we see a bunch of scars around her waist and stomach. The reveal is meant to be a physical display of the fact that Arya is no longer the little girl that we met at the beginning of the series, but it also left fans wondering where these scars may have come from. We did see Arya get stabbed in the stomach by the Waif in Braavos, but that stab wound does not match up with the slashes that we see on Arya's abdomen in this new scene.

The unexplained scars have re-upped a long-held fan theory that the current Arya Stark may actually be the Waif wearing Arya's face. After all, Arya did seem to become a completely different person after leaving Braavos, and although we seemed to see Arya kill the Waif, it is impossible to know what really happened since both women can switch their faces at will.

Since we have no clue where Arya actually got these newfound scars, fans think that they may actually belong to the Waif, who can change her face but not hide her bodily scars. The theory goes back a couple of seasons to when Arya was training with the Waif in Braavos. The Waif was already a master at face-changing and fighting, and would constantly beat up Arya, even nearly killing her. In the end, Arya is able to finally overcome the Waif and graduate from Jaqen H'ghar's assassin school, but some fans think that moment was a trick and that the Waif had actually killed Arya and switched places with her.

The theory is not totally convincing since we have seen Arya recall a lot of specific details from her past that the Waif would probably not know about since she has returned from Braavos, but it would explain how Arya suddenly became such a bad*ss assassin. Since there are only four episodes left in Game of Thrones, fans can expect to get a real answer to this theory soon enough.