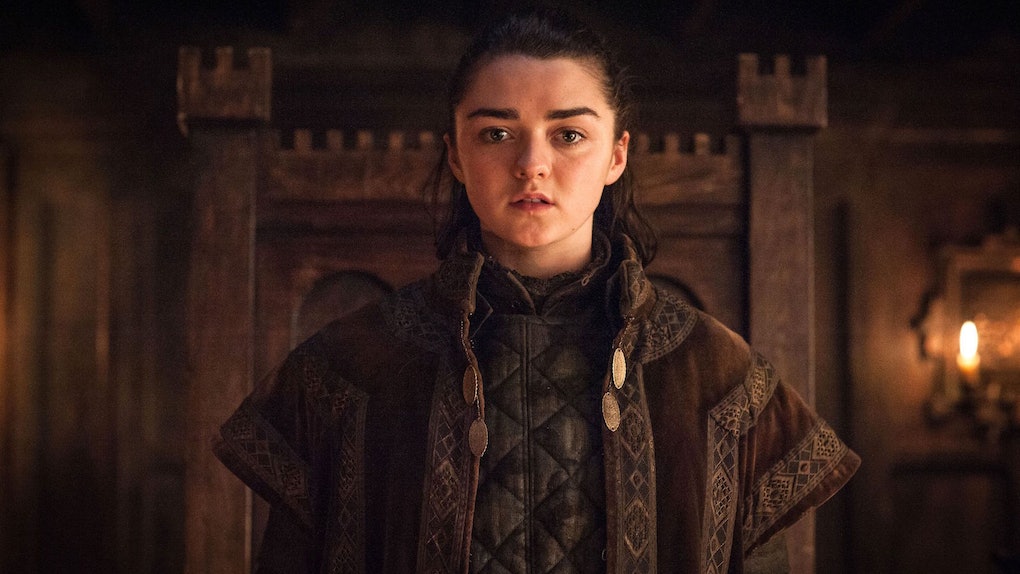 Is Arya Pregnant On 'Game Of Thrones'? Fans Are Already Theorizing Up A Storm

You would think that Game of Thrones fans have already come up with just about every wild theory about what the show's final season has in store, but Sunday night's new episode has fans wondering about a totally unexpected potential development. Arya Stark's evolution throughout the series has shown her going from an underestimated little girl to a skilled, face-shifting assassin. But the most recent episode has fans wondering if is Arya pregnant on Game of Thrones. The new theory could massively change how Arya's story turns out.

Spoiler alert: This post contains spoilers from the second episode of Game of Thrones Season 8. The Season 8 premiere had every Game of Thrones fan buzzing about a potential romance between Arya Stark and her old pal Gendry, and Episode 2 took their relationship to an entirely new level. Now that the Night King's army is almost at Winterfell, Sunday night's new episode showed how everyone there was coping with the very real possibility of dying in the impending war. Some characters focus on their war plans, others plan for their lives after the battle, and others just get drunk and sing songs. But Arya had her own plans in mind. She marched right down to Gendry's little blacksmith shop and proposed that they finally break their romantic tension and have sex.

I mean, you can't really blame Arya — she is about to face a horde of ice zombies and is curious about sex... plus, just look at Gendry. And Arya's assassin training has clearly made her more commanding in her love life as well, as she demands Gendry tell her how many women he has been with before and tells him to take off his pants.

While the love scene was certainly the steamiest moment of Episode 2, Game of Thrones fans know that even though something may seem like a good thing, the show always has a way to twist it into something terrible. So it is no wonder some fans are now worried that Arya may become pregnant from her first sexual experience. It is not that discovering you are pregnant is always a bad thing, but it does seem particularly grim for a young assassin who is about to fight in the biggest, deadliest battle ever.

Then again, Arya is going into the Night King battle with one of the higher chances of surviving, it seems. She does have some of the best training out of everyone in Winterfell, plus she is a master of deception thanks to her face-changing abilities. And obviously, Arya would not actually know if she is pregnant until a while after this huge battle, so it would be something she and Gendry can deal with once the White Walker threat is (hopefully) eliminated. Maybe this could even become the happy ending for Arya that Game of Thrones so rarely gives its characters. Imagine Arya and Gendry just going off to the country and raising their baby together after destroying all the White Walkers. OK, yeah... that doesn't seem too likely, but it's a possibility.

We will just have to see what happens with Arya in the final four episodes of Game of Thrones.

More like this
This 2021 'Game Of Thrones' Season 8 Trailer Is So Confusing... & So Good
By Ani Bundel
The 'This Is Us' Season 5, Episode 14 Promo Teases Another Beth Story
By Ani Bundel
Shonda Rhimes' Quote About Regé-Jean Page Leaving 'Bridgerton' Is SO Shonda
By Rachel Varina
Stay up to date