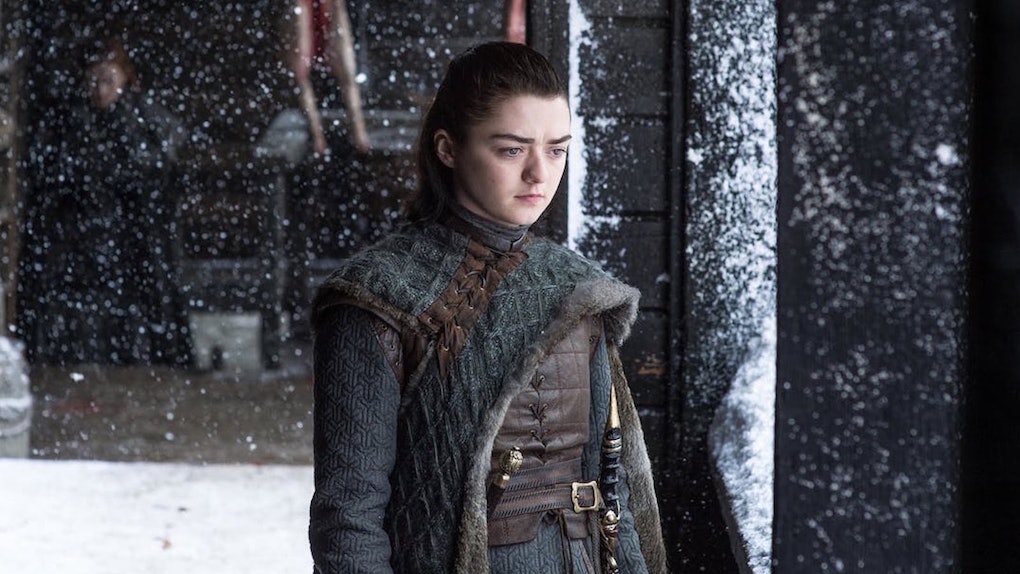 Is Arya Azor Ahai? 'Game Of Thrones' Fans Are Freaking The F Out

Every Game of Thrones fan knew that Sunday night's Battle of Winterfell episode would be the most epic one yet, and it most definitely was. Among all of the major deaths that the climactic battle against the Night King brought about, the epic fight also seemed to confirm a hugely buzzed-about fan theory: the identity of Azor Ahai, or the Prince That Was Promised. So, is Arya Azor Ahai after the events of the April 29 episode? Let's break down why fans think the long-rumored savior's identity has finally been revealed.

Spoiler alert: This post will contain spoilers from Game of Thrones Season 8, Episode 3, "The Long Night." Game of Thrones fans have been theorizing about Azor Ahai for the entirety of the show, and pretty much everyone was looking at this week's major Battle of Winterfell episode to finally give us the truth about the prophesied hero. Azor Ahai is a legendary savior in the faith of the Lord of Light who is said to have fought off the White Walkers and prevented the Long Night thousands of years ago. In the faith, Azor Ahai is predicted to be reborn to defeat the White Walkers when they next descend on Winterfell. Most fan theories pointed to Jon Snow, Daenerys Targaryen, or Jaime Lannister as the primary contenders to be the reborn Azor Ahai, but the ending of this week's new episode seemed to make it clear that Arya Stark might have been Azor Ahai all along.

The clues about Arya being Azor Ahai actually starting coming pretty early in the new episode. The Prince That Was Promised is a character most closely associated with Melisandre, since she is the most devoted acolyte of the Lord of Light that fans have seen in the series. So when Melisandre arrived in Winterfell, it felt very telling that she stopped to give Arya Stark a very long, lingering look.

Later in the episode, another moment between Arya and Melisandre provided an even greater clue that Arya is Azor Ahai. As Arya is about to be killed by a horde of Wights within Winterfell's castle, Lord Beric Dondarrion rushes in to protect her and winds up sacrificing himself so that she can escape. Lord Beric is another Lord of Light acolyte who has actually been brought back to life several times by the god. When Arya meets up with Melisandre after fighting off the wights, Melisandre reveals that the reason the Lord of Light brought Beric to life so many times was so that he could be at Winterfell for this very moment: to sacrifice himself for Arya. This confirms that Arya is a majorly important figure within the Lord of Light faith, which heavily suggests she is Azor Ahai.

And finally, the end of the episode shows Arya sneaking up on the Night King and killing him with her dagger, ending the Battle of Winterfell and preventing the Long Night. This is the action prophesied of Azor Ahai, and it is now very clear that Arya may very well be the true Azor Ahai fans have been waiting for. Now they'll will just have to see how that revelation might change things moving forward... like, could Arya be sitting on the Iron Throne now that she is a legendary hero? There are only a few episodes left, so here's hoping fans will know ASAP.