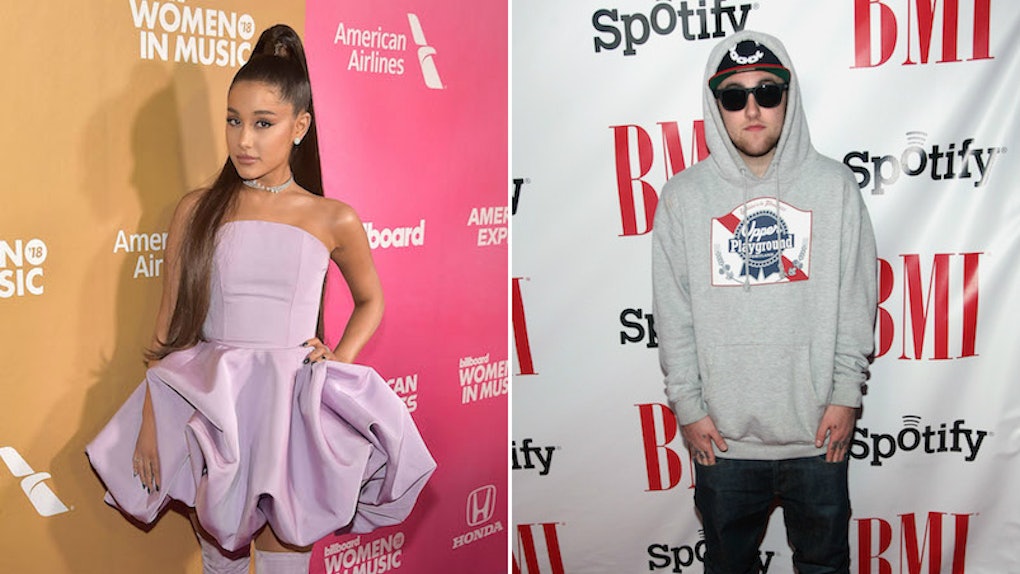 Is Ariana Grande's "Imagine" About Mac Miller? This Clip Of The Breakup Ballad Hints It Is

Does Ariana Grande ever rest? The answer seems to be no. Not even half a year has past since her Sweetener album was released, and she's already on to the next, offering her fans samplings of new music. But whereas Sweetener was focused on self-reflection and empowerment, her new music definitely takes on a more somber tone. This week, she teased a song called "Imagine" on social media, and it certainly sounds like it might be more of a breakup ballad. But many fans are wondering, is Ariana Grande's "Imagine" about Mac Miller? While some are convinced that it has to do with her latest former love interest, Pete Davidson, others aren't so sure.

So here's what went down. Early in the morning of Dec. 13, Grande took to her Instagram story to post the clip, alongside a countdown to the song's release (which *should* be midnight on Friday, Dec. 14). In the clip, you can hear Grande singing, "Imagine a world like that. Imagine our world." And it's not in a cheerful, sing-song-y way, either. It's quite literally the antithesis of her hit, "thank u, next," but it's incredibly beautiful in its sadness.

Check out the clip for yourself to see what you think of the ballad:

Then, a fan tweeted what is seemingly a screenshot of a drafted tweet of Grande's that said, "A lot of this album mourns failed yet important, beautiful relationships in my life (as well as celebrates growth / exploring new independence). but for those of you asking about imagine: i would if 'thank u, next' = acceptance... 'imagine' = denial. hope that makes sense."

The fan composed her own tweet alongside the screenshot that said, "So imagine is like a darker version of 'thank u, next,' possibly explaining about what’s next after a breakup and how to get through it":

Grande then provided more context for her fans by responding to that tweet. She wrote,

Kind of like... pretending it never ended. denial. But i look forward to you hearing it and having your own experience with it. you may take away something totally different and specific to your life! love u.

While Grande didn't confirm to her fans who she is referencing in her song, many fans have narrowed it down to either her ex-fiancé, Pete Davidson, or her ex-boyfriend rapper Mac Miller, who died this past September from an apparent drug overdose.

Personally, it feels as though "Imagine" might be more about Miller than Davidson, mainly because of the song's lyrics and Grande's detailed tweet about "pretending it never ended" and "denial." Those are some pretty heavy topics, and it might seem more fitting that she's writing something in that context for Miller. And, while it's certainly plausible that "Imagine" could be about Davidson, many fans are sharing their thoughts on Twitter and believe that she's referencing her connection with Miller, and the sadness that comes with trying to accept that he's no longer here:

One fan posted a screenshot of Grande's reported response to a fan asking what "Imagine" is about. Grande said "a simple, beautiful love that is now (and forever) unattainable":

Other fans are also connecting the song to a tattoo that Miller had on his arm that read, "Imagine":

If you add all of these things together, it might seem like her new song is about Mac Miller — but we truly won't know for sure unless we hear the explanation from Grande herself. Whether or not she divulges that information, I have a feeling that "Imagine" will be a relatable song that connects with fans far and wide.