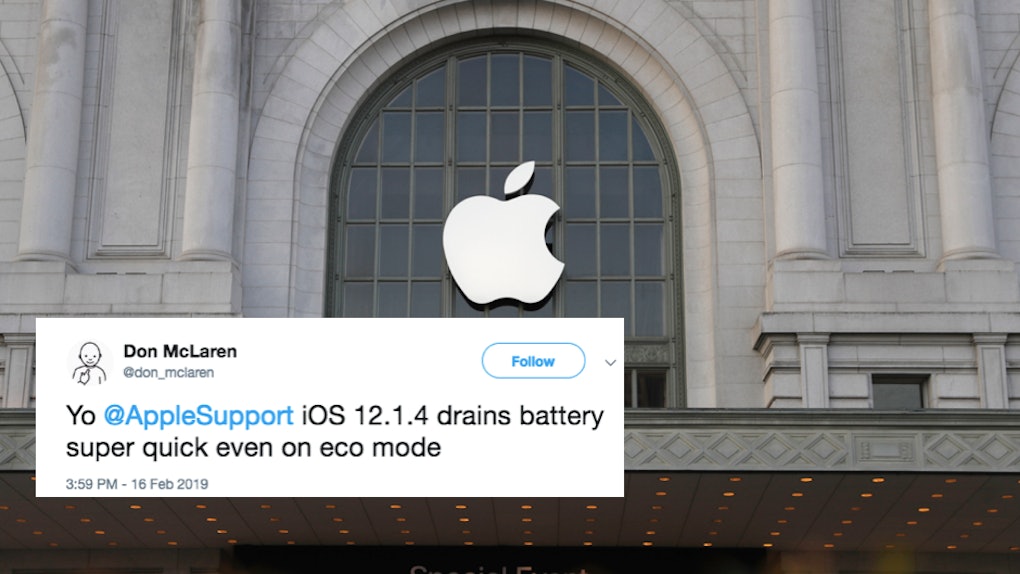 Is Apple's iOS 12.1.4 Update Draining My Battery? Some Users Are Reporting Problems

Sometimes cold winter weather can totally drain your phone battery, however, if your device has been dying more quickly than ever lately, there's a chance something else is afoot. In the last several weeks, iPhone users have been experiencing significant battery drainage, and many speculate it has something to do with Apple's latest iOS update. So in case you're wondering: Is Apple's iOS 12.1.4 update is draining my battery? Look no further than these reported issued from some iOS users. Elite Daily reached out to Apple for comment on the reported battery issues, but did not hear back at the time of publication.

First, iPhone and iPad users who downloaded the iOS 12.1.4 update that was released on Feb. 7 to fix a FaceTime issue, were reportedly noticing some major connectivity issues. Many took to Twitter to discuss their frustration about the latest software update, after finding they were unable to connect to cellular data or even their own Wi-Fi. Several also noted their phones showed "No Service," even after attempting to troubleshoot their devices. There's no direct connection of the reported connectivity issues and the update, but users seemed to notice it after downloading iOS 12.1.4. Elite Daily reached out to representatives of Apple at the time for comment on the reported issues, but did not hear back at the time of publication.

Some Apple users weren't thrilled with the latest software update to begin with, but now, many are noticing that after downloading iOS 12.1.4, there appears to be some reported battery issues, specifically some users' batteries seem to be draining faster than normal. Again, you can't say for certain the update is causing the perceived battery issues, but it appears to have happened for the following users after installing the update. Elite Daily reached out to Apple for comment on the reported battery issues' possible connection to the iOS 12.1.4 update, but did not hear back at the time of publication. Several users took to Twitter to express their exasperation, and you can take a look at their responses, below.

On the other hand, there are a few Apple users out there who aren't reporting any battery drainage. In fact, a number of iPhone users are noticing that the new update isn't affecting their device's battery at all whatsoever, like many updates have reportedly done in the past. It appears that not everyone is experiencing this reported major phone battery drainage with iOS 12.1.4. Make sure to check out these satisfied user responses on Twitter, below.

While software issues can be a major bummer, there are several ways you might be able to troubleshoot 12.1.4's problems — at least in the realm of connectivity. On Wednesday, Feb. 13, Elite Daily editor Collette Reitz reached out to @AppleSupport on Twitter for help. Apple responded by recommending users to turn their cellular service off and back on, by simply going to Settings, clicking the Cellular tab, and turning LTE on and off. When the button is green, the phone is connected, and when it's white, it's completely disconnected. Definitely try testing this out — it may actually fix the Wi-Fi issue, if nothing else.

In my personal opinion, very few things are more disappointing than a phone not operating at peak capacity. Sadly, it seems as though some Apple users aren't loving iOS 12.1.4 at this moment in time, and hopefully this isn't what's causing users' battery drainages and lack of connectivity. In case it is possibly related to these issues, however, I would definitely try the advice from Apple to take a moment and troubleshoot your device. It's worth a shot, isn't it?