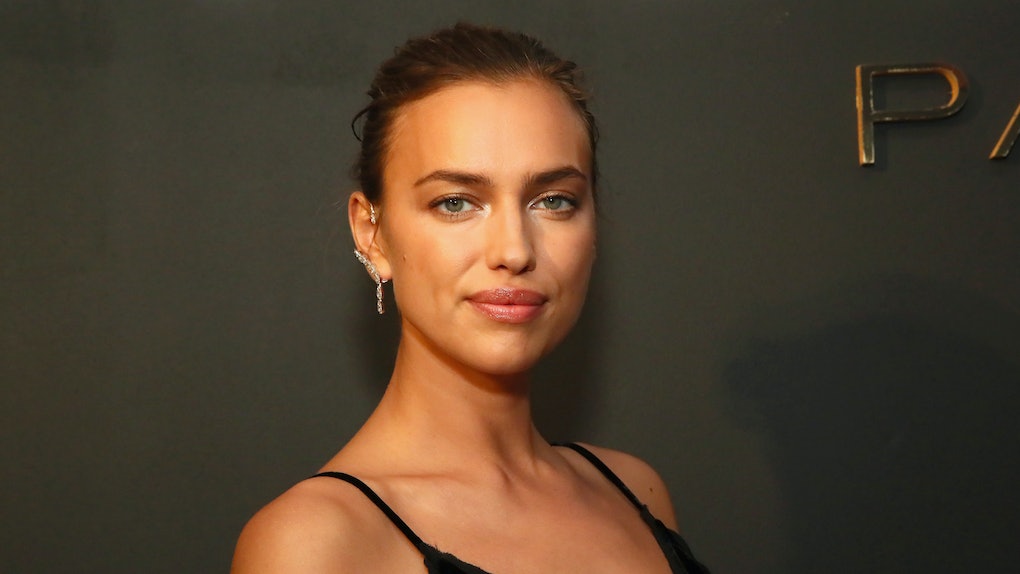 Bradley Cooper and Irina Shayk are officially dunzo, and no, I am not OK. The two called it quits after nearly four years together, perhaps due to the strain of the rumors circulating around him and his A Star is Born collaborator Lady Gaga. As much as I hoped that these two were in it for the long haul, it seems that Cooper may not be the model's last love. However, it should be noted that her relationship with Cooper wasn't even her longest. Just a look at Irina Shayk's relationship history has me feeling confident that she'll bounce back from this, as Cooper isn't the only guy she's ever been serious about.

Though she's notoriously tight-lipped about her private life, Shayk has been romantically linked to at least a few other lucky men. Unlike Cooper, who is a bit of a serial dater, the stunner tends to stick around in relationships for years at a time, and — unsurprisingly — you'll rarely find her single (I mean, I wouldn't leave someone as hot as Shayk on the market for long). While I still hold out hope that the unfairly attractive duo of Cooper and Shayk will ultimately work things out, I want to take a moment to review all three of Shayk's past flames over the years.

Yes, believe it or not, Shayk's first public relationship was allegedly with Linkin Park drummer Rob Bourdon, according to The Mirror. (Elite Daily reached out to Shayk and Bourdon's reps for comment, but did not hear back in time for publication.) However, "public" may not be the right word, as very little is actually known about their two-year relationship. Like, literally nothing. Believe me, I'm not happy about this lack of info either.

Shayk and sexy Portuguese soccer star Cristiano Ronaldo reportedly first met on the set of an Armani ad in early 2010, and it wasn't long before they were a fully-fledged couple. It also wasn't the last time they modeled together — the couple posed together nude for the very steamy cover of Vogue Spain's June 2014 issue. Unfortunately, only six months after that, the couple announced that they were calling it quits.

When the couple split in January 2015, fans speculated whether Ronaldo may have been unfaithful. Ronaldo kept his statement regarding the split simple, citing that the breakup was mutual and amicable. "We believed it would be best for both of us to take this step now," he said, adding, "I wish Irina the greatest happiness." He did not address the rumored infidelity.

However, when asked in an interview with Hola! in June 2015 if she prefers being alone or being in a relationship, Shayk replied that she prefers to be with someone, "but with the right someone." She was later asked to describe her ideal partner, and she replied, "It’s very simple. You have to be faithful to your other half and not have secrets. That’s my rule.” Hmm.

Soon after ending her five-year relationship with Ronaldo, Shayk was spotted on the arm of Bradley Cooper, who had just ended his own longtime relationship with girlfriend Suki Waterhouse. Shayk and Cooper first stepped out together at a Broadway production of Finding Neverland in April 2015, but it wasn't until the Paris Fashion Week L'Oréal Red Obsession party in March 2016 that they made their status official on the red carpet.

The two largely kept the details of their relationship hush-hush, but Shayk couldn't hide how serious she and Cooper had become after she debuted her baby bump in late 2016. The two welcomed Lea de Seine into the world in March 2017, and all seemed to be going swimmingly for the couple until those pesky love triangle rumors involved Lady Gaga surfaced. A source insisted to E! News that their breakup had “nothing to do with Gaga," even suggesting that the couple had been unhappy long before fans started questioning Cooper's on- and off-screen chemistry with the singer.

Shayk and Cooper will continue to raise their daughter together and are even still living together (which is... progressive?). Though this doesn't mean that the breakup isn't legit, it does give me a little hope that this break may not be for good.