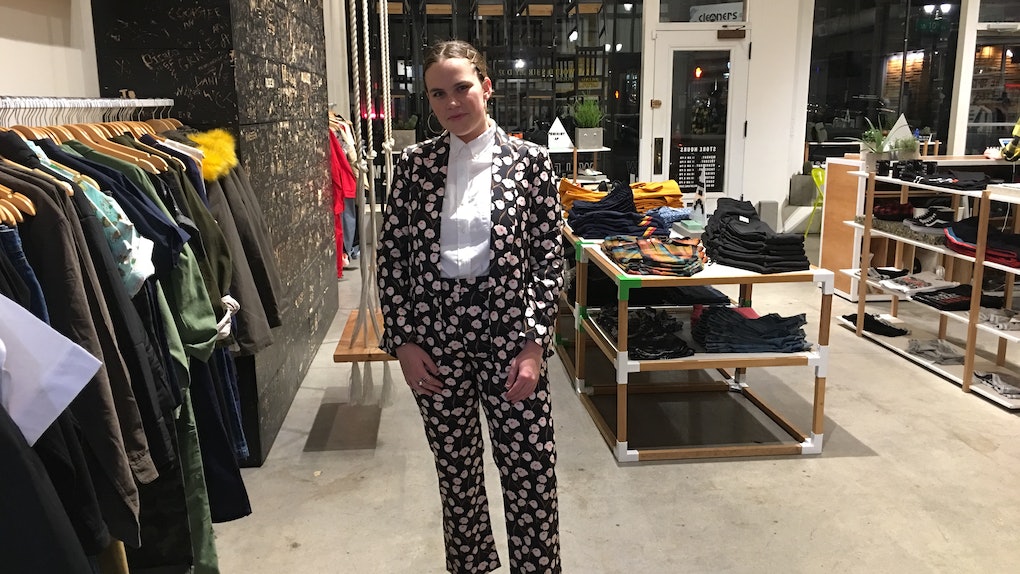 With the recent emergence of holidays for literally everything, I’ll admit I assumed “Women's Day” was another #internet #trend invented by cis-men at Google. To my surprise, International Women’s Day, celebrated annually on March 8, was started in the early 1900s by labor rights activists who actively spoke on how social categories such as race, gender, class, and nationality impact each other. With this understanding, I started to think about how I, as a non-binary person, could find merit in celebrating something like International Woman's Day. And, I realized by shifting the focus from white ladies in pussy hats to trans women, women of color, women of different abilities, and all other marginalized beings, I can celebrate International Women's Day pretty easily. I've decided that for me, International Women's Day is less about “women” and more about intersectionality — the way in which different forms of oppression coincide, collide, and of course, intersect.

First started by the Socialist Party of America in the early 1900s, International Women's Day was adopted by the United Nations in 1975 and is now an official holiday in a number of countries including: Afghanistan, Armenia, Cambodia, China, Madagascar, Mongolia, Uganda, Ukraine, Uzbekistan, Vietnam, and Zambia. Although it manifests differently around the world, in 2019 the official United Nations (U.N.) theme is "Think equal, build smart, innovate for change." And although International Women's Day has hopped on the trendy hashtag train (#WomensDay), the U.N. has made some some serious IRL efforts to create a platform to uplift voices that historically go unheard, highlighting women working in areas such as disability rights, water management, or the refugee crisis.

As an assigned female at birth (AFAB) non-binary person, when it comes to gender liberation, "women-centered" anything is like an obligatory family party that I don't really want to be at, but nonetheless, here I am. I celebrate womanhood because most days, the world is going to call me a woman anyway. I have to face idiot men yelling at me out of moving vehicles, getting comments about my cellulite on social media, and fear walking alone at night like women do. I have to spend my own money and time on menstrual care and birth control, like women do. I endure the wage-gap, imposter syndrome in the workplace, and constantly have to listen to not-women talk over me — like women do. And I don't even get the relief of belting Shania Twain's "Man! I Feel Like A Woman" or reveling in my ~female mystique~ at the end of the day. My relationship with my womanhood is lots of gendered stick with no genderless carrot. And when it comes down to it, I find power in choosing it for myself before it gets shoved down my throat.

I will never not be shaped by gender, specifically 'womanhood,' in some manner.

"Womanhood" has become a container for the sexism I have to deal with, the gender dysmorphia that keeps me up at night, and the intersection between how I see myself and the box the world tries to put me in. No matter how many fancy coffee shops boast genderless bathrooms, or how many cis men I can convince to openly cry (ideally to licensed therapists who are getting fairly compensated for their time), I will never not be shaped by gender, specifically "womanhood," in some manner. Even if I woke up tomorrow and gender was over, I would still need to recover from my previous 24 years of being seen as a woman. International Women's Day, then, is a time to be gentle with myself and to acknowledge what I go through, while still checking my own privileges. It's a day less about what it feels like to "be a woman" and more about what it feels like to be labeled as a woman, regardless of how I feel or identify.

Although trendy T-shirts (famously worn by cis people) may claim "Gender is Over," I'd argue gender and its effects are felt daily by everyone, especially trans women and especially trans woman of color, who face the highest risk of gender-related violence everyday, according to the Human Rights Campaign (HRC). Between the years 2013 and 2017, there were at least 102 murders of transgender individuals, per the HRC, and many more may have gone unreported. Of these deaths, 86 percent of the victims were people of color. It's the intersectionality of race and gender that puts trans women of color at higher risk for violence.

Understanding this opens International Women's Day up to be a time not only for "women's empowerment," but for reflection on how to better protect trans people and for better understanding on how intersectionality works on a daily basis. You can start by reading up on greats such as Kimberlé Crenshaw, Audre Lorde, bell hooks, Sylvia Rivera, and Marsha P. Johnson, donating to organizations that support transgender rights, or even just thinking about how to be the change you want to see in the world. It's an opportunity to take time to reflect on your role in dismantling systems of oppression — acknowledging how Western beauty standards and fatphobia might frame the way you talk about your body, admitting that even your faves can be problematic, and taking stock of the privileges you carry in the world: race, ability, education, nationality, sexuality, and of course, gender.

I observe International Women's Day because I feel entitled to it. I feel like anyone who isn't a rich, white, cis, straight man is entitled to it, with a special focus on those who identify as women or femmes, those who were assigned female at birth, and those who endure sexism (in whatever form) in their lives. And as always, a super special focus on trans women of color. Gender is vast. It is confusing. And it is unsettling. But it is also mutable and it is subjective. In the context of something like International Women's Day, "women" can mean whatever you want it to. So, I choose to see International Women's Day as chance to reflect on one's role in dismantling systems of oppression that affect everyone and to acknowledge the problematic tendencies that exist in even "progressive" spaces or movements. (Looking at you, vegan boy with an Angel Olson tattoo who fights animal cruelty but frequently manipulates younger women.) It's a time to reflect on the way you see yourself, and the way you inevitably get affected by other people's perceptions of you.

For myself, I have plans. I'll be celebrating International Women's Day by using my carbonator to make my own seltzer, reading You Can't Touch My Hair: And Other Things I Still Have to Explain by Phoebe Robinson in bed, and Venmo requesting all the cis men in my life for compensation for my time — because if they're going to continue to profit from their identities, the least they can do is intersect my bank account.

More like this
Why Are Washington, DC & Puerto Rico Not States? There's A Lot To Unpack
By Rhyma Castillo
These Tweets About Harris & Pelosi At The 2021 Address To Congress Cheer This Huge Moment
By Rhyma Castillo
Here's Why Every Zodiac Sign Might Lie To Their Partner
By Rachel Shatto
Stay up to date