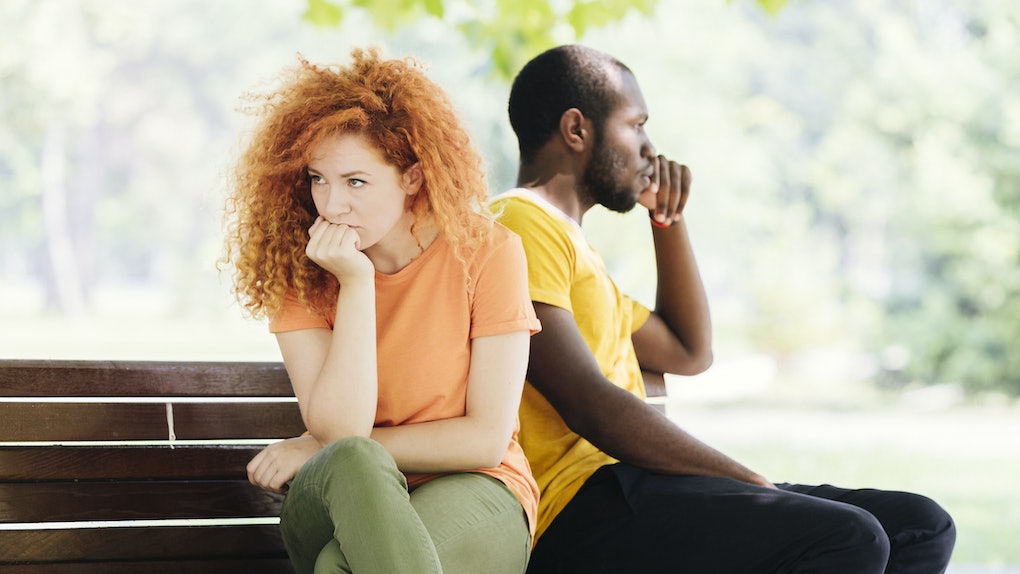 If You're Not Ready To Define The Relationship, Here's How To Tell The Person You're Dating

Few things hurt worse than asking your boo to commit and being told that they're not ready. I can't tell you how many times I've said to someone, "Let's make this official," only to be told, "Let's continue being friends with benefits for the foreseeable future." But what happens if you're the one who's not ready to define the relationship? It's tough enough deciding when to DTR when both parties are into it, so knowing the right way to say, "I'm not ready for this," without hurting any feelings is near impossible.

There's no set rule about when it's appropriate to DTR. However, Alessandra Conti, celebrity matchmaker at Matchmakers In The City, told Elite Daily that it's not the best idea to DTR half-heartedly. "The goal is to be exclusive with the right person," Conti pointed out. "The best way to truly learn about another person is to take the time needed to truly get to know them before making a commitment to them." Luckily, if you decide you're not prepared to commit, there are ways to express this to the person you're seeing and still salvage the relationship. You might be ready someday, but here's how to (nicely) tell someone that today is not the day.

Approach The Conversation With Honesty And Openness

Being evasive will only lead to confusion. If the person you're dating asks you to take the next step and you're not quite on board, don't hem and haw — tell them exactly how you're feeling. Of course, you have to first figure the root of your hesitation. Do you not know them well enough? Are you just coming out a bad relationship and not ready for another? You don't necessarily owe an explanation, but you do at least owe them a truthful response.

Noelle Cordeaux, life coach and CEO of JRNI Coaching, told Elite Daily that communication is key when making this big decision, because yes, defining the relationship is a big decision. "Communication and negotiation might not sound sexy early on, but [they] can be life-saving in the long run," she emphasized. Telling that person, "I'm not ready to do this because..." is much kinder than saying, "I suppose we can be official."

Find Out Exactly What The Other Person Wants

One of the many reasons why it's difficult to DTR is because everyone's definition of "relationship" is a little bit different. When the person you're seeing wants a greater commitment, find out exactly what it is they have in mind. Do they want exclusivity? Do they want to introduce you to their parents as their partner? Do they just want to hold your hand in public sometimes? Figuring out their expectations will make it much easier to determine your response.

Conti pointed out that labels are meaningful. "When you commit to being someone's boyfriend or girlfriend, you are saying to them and to the world that you could potentially see someone more serious come of the relationship." Ask the other person what being in a relationship means to them. If you find that your expectations don't align, then it will be easier to express your commitment concerns.

Ask The Other Person About Their Timeline

It's important to note that there's a big difference between a timeline and a deadline. Even though there's no right time to DTR, the person you're seeing probably has an idea of when they expect commitment, whether that's after three dates or three months of dating. Everyone has their own timeline, and if you find that you and the other person have very different thoughts about when to DTR, it should be discussed.

As Cordeaux said, "Sometimes, people are simply mismatched in their needs and/or their willingness to participate in a relationship." It's OK if your timelines don't perfectly align, but if your expectations about commitment are totally incompatible, discovering this will allow you to offer the other person some clarity. The person you're seeing may want to DTR before doing the deed. You may be comfortable having sex without being official. Explaining this to the other person will make more sense than simply saying, "Not yet."

Figure Out If There's A Way To Compromise

Everyone deserves a partner who is just as willing and ready to be in a relationship as they are. You may think you're sparing their feelings by agreeing to commit before you're ready, but you're actually doing them a disservice. However, if you think you're not quite ready but are open to the possibility down the road, see if there's any way you two can find a happy medium.

"If one partner is more interested in commitment than the other, labeling the relationship too soon can trigger expectations that set the stage for the pursuer-distancer pattern of behavior," Cordeaux explained. Rather than wielding power over the other person's vulnerability or committing too soon, find out what kind of relationship might make you both happy. Would the person you're seeing be willing to wait another month before having the relationship talk? If yes, great. If not, it may be time for you to both move on.

No one wants to be rejected, but that doesn't mean you're obligated to commit yourself to something you may not want. If you're asked to DTR and feel any sort of hesitation, be honest. The other person will appreciate that more than your reluctant acceptance.