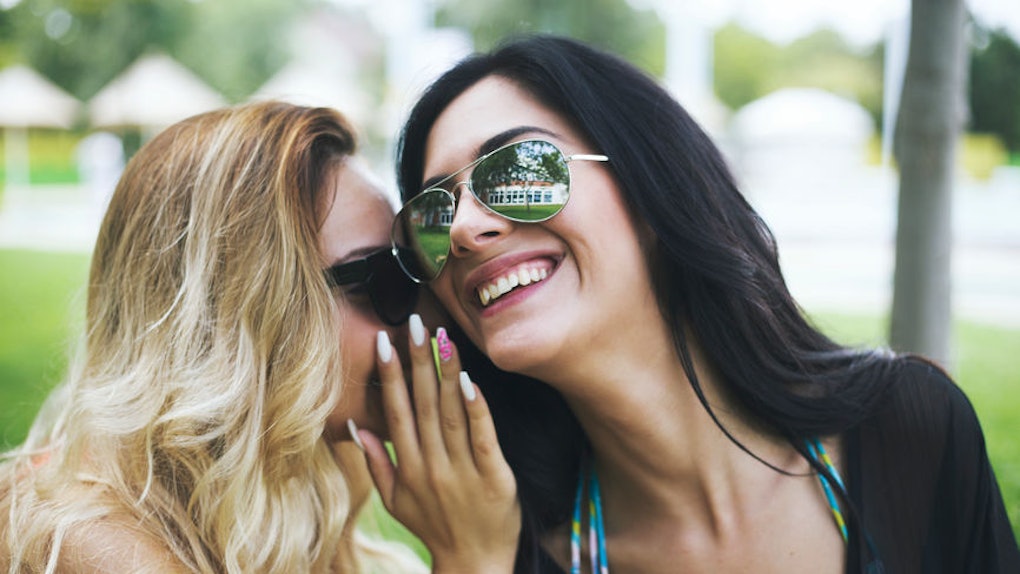 If You're Bad At Keeping Secrets, You Can Relate To These 8 Things

I really wish I could say you could trust me, but I have to be honest and let you know now, I'm the actual worst at keeping secrets. The struggle is all too real. If you're bad at keeping secrets, you can relate as well. There's just something about keeping all of that information bottled up inside that's asking me to do the impossible. I feel like a bottle of champagne someone decided to shake up, and I'm about to pop.

I like the concept of a secret. It's something that's supposed to be kept between two people, which is great and all, but I'd so much rather share adventures, clothes, and French fries with my bestie. When you tell me, "Don't say a word," you might as well be putting a giant red button in front of me, and telling me not to push it. (I'm going to push it.)

Maybe, those of us who are bad at keeping secrets just need to try harder. With time and practice, we could be really good at storing secrets and throwing away the key. It's a possibility, but until then, those of us will have to deal with these eight things that are all too relatable.

1. You're The Reason People Are So Serious About #NoSpoilers

Spoiler alert: You know I can't contain myself, and something will definitely slip out in casual conversation. (I apologize in advance.) I mean, when did spoiling a movie become such a crime? I understand people want to go into a movie without knowing anything that's going to happen, but if you're that into it, you should be there at a midnight screening. I just want to talk about the cliffhanger with someone, OK?

2. Your Friends Don't Tell You About Surprise Parties Until The Last Minute

Who doesn't love a good surprise party? When they go according to plan, they can be magical. There's nothing better than seeing your friend, who doesn't suspect a thing, walk into a room filled with her favorite people, cheering, "Surprise!" To ensure things go off without a hitch, your friends and fam usually tell you the game plan last-minute. #Struggles.

3. Your Friends Won't Tell You Who They Have A Crush On

You've begged and pleaded for your friends to dish who they're crushing on, but they just won't clue you in on the details. You can't blame them, considering they've made the mistake in the past of letting you know (and we all know how that went).

Since no one will tell you, you've actually become very good at the detective work to figure it out all on your own. It's a skill you now possess, because secret keeping is one you most certainly do not.

4. Your Excuse Is You're Just Being An Open And Honest Friend To Everyone

Holding in a secret can be stressful AF. You just want to let it all out with an exhale, but you know you can't. I'm pretty sure secrets are actually more stressful for those of us than the average person, so good riddance. You don't need that in your life, anyway.

6. You Feel Left Out, But You Know It's Your Own Fault

7. You Really Think You Can Change, But Old Habits Die Hard

I can't tell you how many times I've said, "This time I won't tell anyone. I swear." I really believe I can change.

You've probably even gone weeks without telling a secret, and can pat yourself on the back for that. Though, we all know old habits die hard, and eventually, the tea will spill.

8. You Live By The Mentality, "No Secrets, Less Drama"

Sometimes, secrets are just a recipe for disaster. You firmly believe that keeping things in can cause more harm than good. As much as you may spill a secret or two, you've actually helped out your friends from time to time again.

When you found out two of your friends both liked each other in secret, you helped them get together. (Go, you!) And when your friend confided in you that she wasn't doing well in school, you rallied to get friends to help her study. Your honesty is just as important as being able to keep a secret.