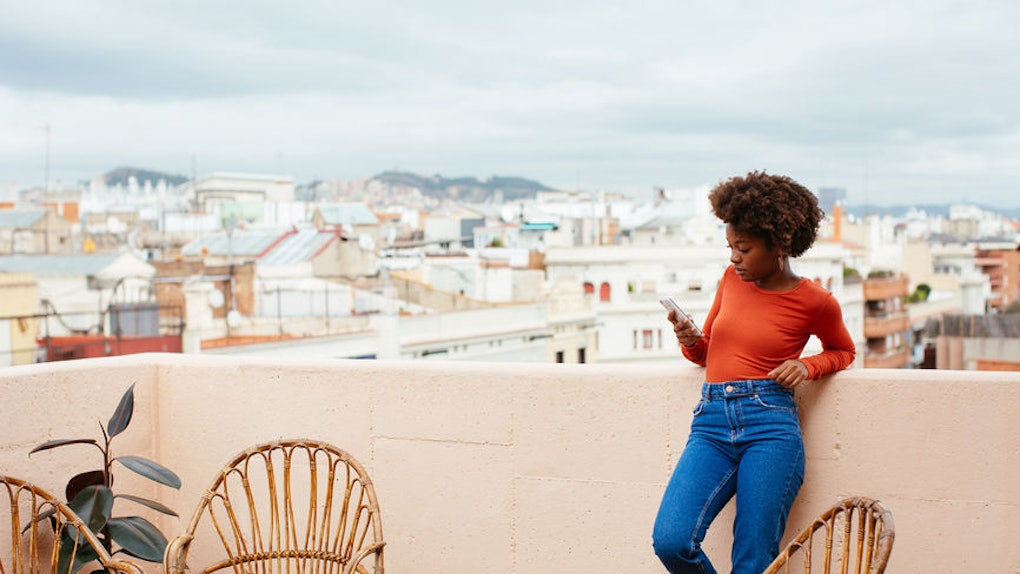 If Your Ex Ignores Your Text Message, Think Before Sending Another, Experts Say

Just because a relationship ended, doesn't mean it's ended for good. Plenty of people break up and get back together (Kate Middleton and Prince William even did it!), so it's not always a bad idea to reconnect with your ex if the possibility of getting back together seems realistic for you. Depending on how things ended between you, you might feel comfortable shooting them a text sometime. But, if your ex ignores your text, and you're left confused and shaken, should you send them another? Or do you just back off? Obviously, every situation is different, but before you hit "send" again, take some time to reflect on the relationship and how it ended.

"Any communication with your ex will ultimately be based on how the relationship ended and the last communication you two had," Thomas Edwards, The Professional Wingman, tells Elite Daily. "Was it a big blowout and they blocked you from all of their social media? If so, that might be a clear message to stay away. If it was more amicable and time has passed, then sending something will likely not stir anything up — of course, that would depend on what you’re texting and the reason for it." Again, think about whether or not it's a good idea to be texting your ex in the first place and what you're trying to accomplish with it. Then, you'll have a better idea of what it means if your text goes unanswered.

While everyone's texting style varies, Edwards recommends just going for it. If things ended amicably between you two, or it's been a while and you feel comfortable texting them again, then do it! If they haven't responded to your first text, that doesn't mean you should give up. "I've always been a 'three strikes' guy," he explains. "If it's that important you connect with them, then it’s worth a few shots." That isn't to say that you should be sending them a text every minute of every day, but don't just assume they're purposefully ignoring you, especially if you're sure that you two have unfinished business or could be friends again.

"Of course, you want to spread out the texts to make sure you’re not being pushy or needy," Edwards adds. "If the first text doesn’t get a response, then sending one a day or two later will be fine."

On the other hand, if your first text was ignored and you realized that maybe things didn't end as smoothly as you had thought, it might be best to just let it go. "Most people are glued to their mobile phones, so if you’ve sent a first text and haven’t gotten a response, you can be sure your ex noticed your text, and wasn’t ready to respond immediately, or at all," Julie Spira, online dating expert and founder of Cyber-Dating Expert, tells Elite Daily.

"For that reason, don’t send a second text. Perhaps they don’t want to get back into a texting exchange, or are thinking about if they want you in their life as a friend or not. If you don’t hear back, it could mean they’ve decided that going 'no contact' — which typically lasts for about 30 days — is the best way to move on." Depending on how your breakup went down, your ex might not ever want to talk to you again. It's not fun, but it might be the closure you need to truly move on.

Even if you do send that second text, Spira says to stop while you're ahead. "It's time to respect their wishes to not be in contact, and move on with your life," she advises, if you've sent a second text after your first one was ignored. "You're getting a clear message that your ex isn't interested in communicating with you now, or possibly ever at all. Try to avoid staring at your phone and obsessing about if and when you’ll get a reply, and go and spend time on yourself and cultivating new relationships."

Texting your ex might not always be the best idea, but it might also help you move on. If you've already hit "send" and have gotten no response, then it's probably best to move on. If you follow Edwards' advice and send three messages, and still aren't getting a response, consider just putting your phone down and trying your best to move on. It might be awkward or uncomfortable, but at least now you know where you stand with your ex, and you can delete their number with no regrets.