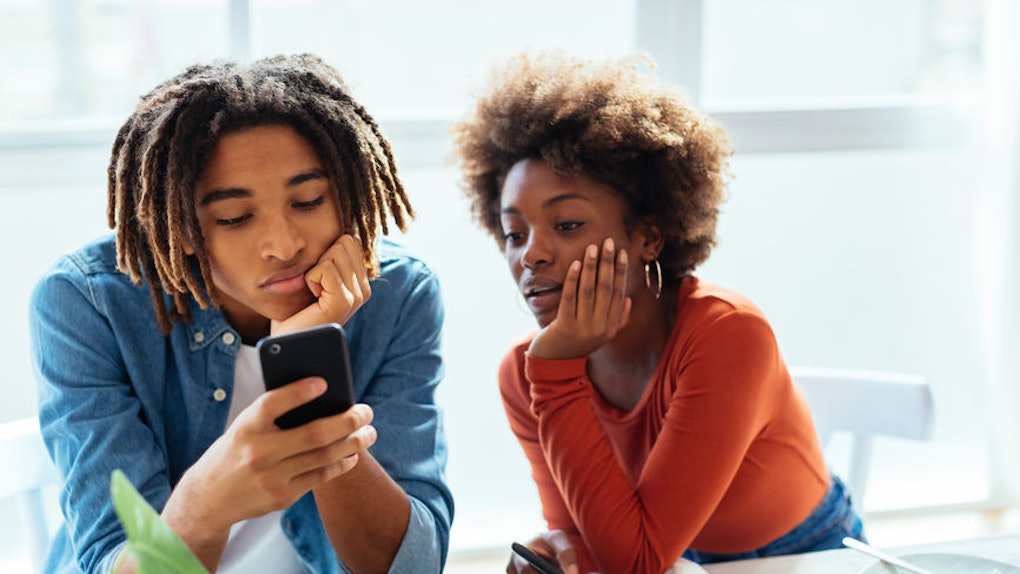 If Your Boyfriend Or Girlfriend Follows Their Ex On Instagram, Here's What You Should Know

Let’s all just admit something here — we’re practically social media detectives. And this means we have intel into each other’s pasts — potentially years back! So it’s no surprise if you and bae know each other’s romantic history before you’re even an official couple yourselves. Whether or not you've talked about your exes, odds are, you know who they've dated before you. And as long as your current relationship takes priority, this is NBD. But when your boyfriend or girlfriend still follows their ex on Instagram, things might get a little more complicated.

Thankfully, this shouldn’t necessarily be cause for major stress. I spoke to dating and relationship writer Demetrius Figueroa, who provided a game plan for handling this situation if it’s harshing your vibe. Overall, he emphasized that every couple is different, and just because your partner is still digitally connected to his or her ex doesn’t mean he or she isn’t committed to you now. “Many people can and do have healthy friendships with former partners, but your partner should be able to understand that their friendship with an ex shouldn’t come at the cost of your current relationship,” he says. Exes are an important part of many people’s histories, and it’s OK to want to keep in contact with them — as long as it’s at a safe distance.

If your partner is following their ex without engaging in much of their content, this probably isn’t anything that should concern you. This goes the same for if their ex follows them back. “If your partner’s ex still follows them on Instagram but they’re respectful of your relationship, there really isn’t anything to handle,” Figueroa assures. These two are probably just trying to stay on friendly terms, or maybe they didn’t even notice they’re still connected on social media.

Things get a little trickier the more your partner chooses to engage with said ex. “If you see that they've liked each and every photo, commented on each photo, and generally seem to pay a lot of attention to their ex, call it out,” Figueroa advises. Especially if the situation makes you feel uncomfortable or jealous, it’s best to put your feelings out there from the start. If for some reason you’re afraid that there might still be feelings between your partner and their ex, ask them about it! You shouldn’t have to fret in silence. A great partnership is all about the ability to work through each other’s feelings without blaming or judgment.

If your partner and their ex are communicating frequently via Instagram DMs, this definitely requires your attention. Maybe you notice a notification pop up on their phone while it's lying in plain sight, or maybe you were snooping through their messages (which is probably a breach of trust — be careful!) “There’s nothing wrong with remaining friends, or just being friendly with an ex, but I’d be wary of any frequent communication between my partner and their ex, especially through Instagram DMs,” Figueroa says. “That’s the point when I’d recommend having a conversation with your partner about their behavior and their ex’s behavior.” If they’re able to explain everything to you and things seem fine, all the better! But otherwise, it might be time for your partner to dial back the contact.

Figueroa says that it’s not unreasonable to ask your partner to limit communication with their ex if it makes you uncomfortable. “Whether that means not messaging an ex over Instagram DMs, or going so far as to block them because their ex isn’t respecting the boundaries of your relationship,” Figueroa says, you can express that you’d like them to take a step back. Your boyfriend or girlfriend should want to make you a priority, so if you’re in a safe, loving relationship, you shouldn’t feel afraid to say what you need. Just make sure you aren’t doing so in a way that feels accusatory. “If you’re uncomfortable with the level of interaction your partner has with their ex, there is nothing wrong with telling them that they have to change their behavior,” Figueroa explains. “The key thing is to stress your discomfort with their contact with their ex, and not to turn it into an accusation of any wrongdoing on their part.”

Approach the conversation from a mature, understanding point of view to figure out what compromises the two of you can make. If you address concerns like this as they arise, rather than letting your feelings simmer for weeks or months, you’ll build a strong foundation of trust and authenticity with your partner.