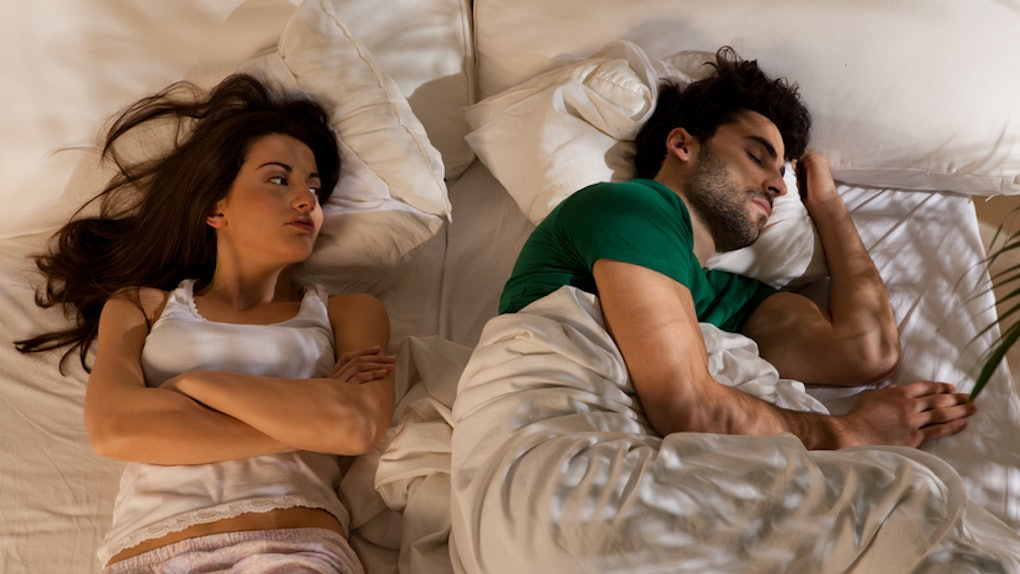 If You Haven't Had A Fight Yet After Six Months Of Dating, Your Relationship Might Be In Trouble

After about seven months of dating my high school boyfriend, I thought, "Hmm, now seems like a good time to pick a fight about the fact that we haven't had a fight yet." Asinine, I know, but I was so incredibly bothered by this realization that I couldn't let another day go by without addressing it.

You might be thinking that I got it all wrong — that the reason we never fought was because we were so compatible. Not at all.

For whatever reason, my boyfriend's attitude toward our relationship was like one long, monotone recording of him muttering, "Just along for the ride." He didn't literally say that, but he might as well have. This is what my inner thoughts looked like most of the time:

I eventually broke up with him up out of sheer boredom. I figured if we couldn't at least find one thing that we both felt strongly enough about to argue over, we definitely couldn't spend a lifetime together. Like, can you imagine?

That's why I think you should at least have your first fight within the first six months of your relationship and Nicole Richardson, licensed marriage and family therapist, agrees. Sort of.

She explains, "Since everyone communicates differently, there isn’t exactly a typical or normal amount of time after which couples start arguing. But holding back on things that upset you is dangerous in relationships, especially early on." It suggests that you're both bottling up your insecurities and concerns about the relationship instead of addressing them head-on, which prevents you from moving forward.

That's what I felt was happening in my relationship. My boyfriend was so afraid to rock the boat that he was always willing to go with flow, regardless of whether or not we actually had the same points of view.

The problem with this strategy is that it's short-sighted. If you and your partner don't know how to work through an argument about simple things like when one of you watches ahead on Netflix, you won't be able to confront the much more important relationship issues that are bound to come up later on.

Dr. Fran Walfish, Beverly Hills family and relationship psychotherapist and co-star on Sex Box, confirms this, saying, "A red flag in relationships is when the couple has never had a fight. This couple may proceed toward engagement and marriage and have no way to evaluate how they navigate differences. Come an unexpected life crisis like a car accident, a medical scare, or the death of a loved one, the couple might have to deal with both the crisis and their different points of view concurrently, raising the stakes and intensity [of the argument]."

Think of it like a volcano. Sometimes, if the magma (melted rock beneath the Earth's surface) is impenetrable — you know, like the walls you and your partner have built up between each other — gases can't escape to the surface. Pressure builds up and the result is a violent explosion of ash or in your case, every tiny argument you've managed to avoid up until this point.

So, OK, my decision to pick a fight just for the sake of fighting wasn't the best one. But the point is that fighting with your partner is totally normal in healthy, happy relationships. It allows you get to know each other better by observing how you respond in times of conflict and it forces you both to work on your communication skills as you come up with resolutions together.

Although getting into a heated argument a few times a month is nothing to worry about (and might even be advisable), if you sense that your fights with your partner become abusive or manipulative, you should take a step back. Speak to someone outside of your relationship about the fights you've been having and how they make you feel. If you feel threatened, you can contact The National Domestic Abuse Violence Hotline by dialing 1-800-799-SAFE (7233) or via live chat to speak to an advocate.