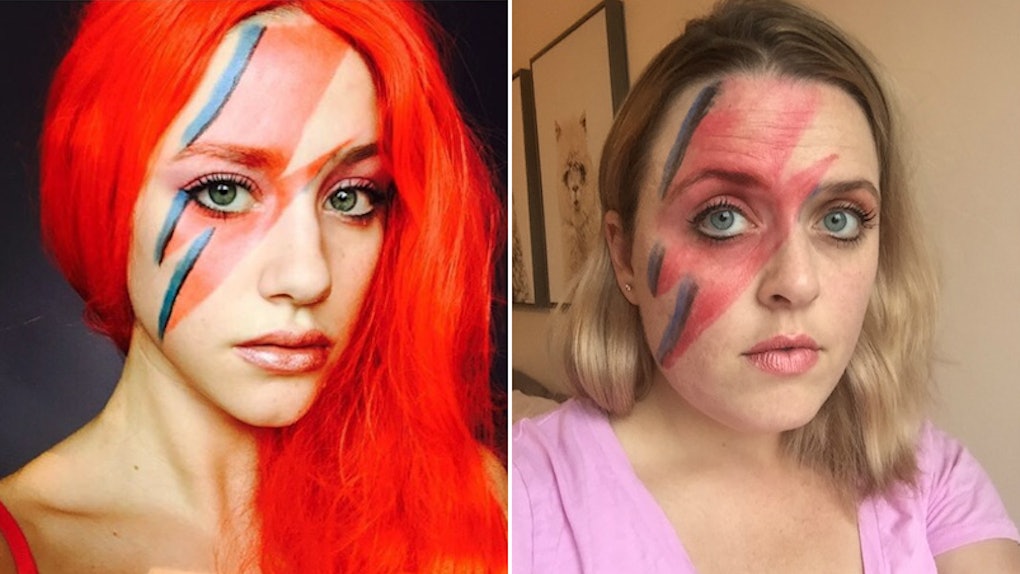 I Tried Lili Reinhart's Halloween Makeup Looks & TBH, I Did Not Nail It

I feel like it takes courage to try to replicate anything Lili Reinhart does. For this reason, I'm patting myself on the back for giving two of her best Halloween costumes a try. Reinhart has a flair for this spooky holiday. She's rocked some serious makeup looks ranging from a zombie princess to a mystical mermaid, and I wanted in. After browsing some of her best costumes, I picked two options I thought I could pull off. (Ha ha.) I tried Lili Reinhart's Halloween makeup for her David Bowie and Queen of Hearts-inspired costumes, and gave myself a solid two out of five stars. Womp, womp.

Here's the thing: Halloween makeup is not a one-size-fits-all situation. I thought the smartest thing for me to do before attempting these two looks was to go buy a catch-all face paint kit. In retrospect, I should have saved up and made a massive commitment to real makeup at Sephora because the crap I landed on was a sh*t show. I actually asked my husband while he was out on a Target run to see what they had in the Halloween aisle and grab "whatever paint set came with the most colors." He was grumpy because that meant he had to get the most expensive kit, which was a whopping $10. *GASP!*

To be fair, the kit looked legit. It came with all of the goods. I got 12 face paint colors, five face crayons, some fake blood, materials to create scars (?), a tube of white cream makeup, glitter gel, and a handful of sponge applicators. It seemed like a real win at the time. Then, I went to apply it on my non-celebrity skin and I embarked on what I now refer to as The Great Halloween Makeup Battle of 2018.

Let's be real, the paint slid all over the place. For as pigmented as it looked on my fingers and in the packaging, it was actually very difficult to get it to layer properly on my face. Whenever I tried to apply more, I just ended up rubbing around whatever was already there. That made it particularly tricky for the David Bowie look, which required straight lines and contrasting colors laying right next to each other.

For reference, here's what I was going for:

I know. I feel like an idiot now that I'm looking at it, too. Who did I think I was?

The lightning bolt should have started with very straight blue and black lines. However, I ended up creating wobbly gray streaks. Also, what should have been a bright orange, sharp bolt was more of a red, blotchy mess. It was... not awesome.

I sort of hoped that once I added Lili's bold, black eyeliner and eyelashes plus a little bit of glam on my lips that I could turn things around. Honestly, it's hard for me to tell if it helped or hurt. The main thing I learned at this stage in the game is how hard I dropped the ball not picking up a fire-red wig.

I searched around for one similar to Reinhart's (or even one close to Bowie's original hair style) and just couldn't justify spending the money! Wigs are pretty freaking expensive, and the one I was looking for is not run-of-the-mill. So, I tried substituting with a neon pink wig I already owned. It was, for all intents and purposes, nothing like Lili's long red wig other than it was a vibrant color. It definitely made things worse.

In the end, here's the trajectory of this iconic look.

Yes, I'm ashamed of myself, too. Please don't come at me trolls, even though I deserve it.

Anyway, I was hoping things would get better when I tried my second Lili Reinhart Halloween makeup look — the Queen of Hearts.

Spoiler: Things only got worse.

Here is Lili's Queen of Hearts:

Again with the weird bob haircut wig! I don't know why I own these either! I look like Monica from Friends after a bad trip to the Bloomingdales makeup counter. Also, how do you learn to smize?!

Just like with the David Bowie look, I couldn't get my neck paint to make a solid straight line to save my life, let alone go on as thick and even as Lili's. Her eyebrows also look like something I would pay a wax specialist to replicate, whereas mine looked like a literal circus clown went to town on my face.

Also, just as a cool insider detail: the "white face cream" was a nightmare to wear. My skin was desperate for air, and god forbid I had to itch my nose or something, because there was no way this paint was staying where I put it.

Here's a little bit of a closer look at the application journey.

In the end, the final result for the Queen of Hearts felt like a huge amount of effort for very little payoff.

My moral of the story is leave wild makeup to the professionals like Lili Reinhart unless you can get your hands on high-quality materials. I've done some really cool looks on my husband and myself in the past (thank you very much), but definitely fell short when it came to replicating Lili's masterful costumes.

Guess they don't use the word "spooky" for nothing.

More like this
I Tried Singing While Running Like Miley Cyrus & OMG, My Lungs
By Rachel Varina
Michelle Obama's Easter 2021 Instagram With Barack Is A Cute Photo Booth Moment
By Daffany Chan
Lauren Conrad's Amazon Handmade Mother's Day Gift Ideas Under $40
By Rachel Chapman
Stay up to date