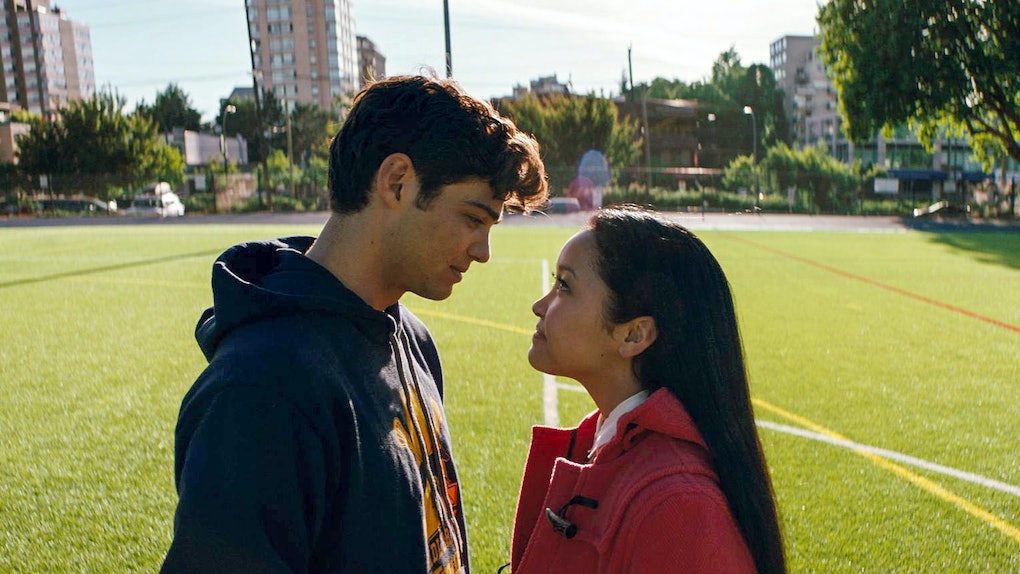 Our love lives are probably far from enviable, but when Halloween comes around, we can disregard any flaws we might have in our real-life relationships and temporarily embody the pop culture pairs we admire most. Whether you want to emulate a fictional or real-life couple this Halloween season, original couple costume ideas are always crowd pleasers, and we've got your back if you're struggling with wardrobe inspiration. Although we won't judge if you want to try out more than one of these suggestions, you'll definitely want to consider these pop culture couples costumes for Halloween 2018.

While dressing as certain celeb pairs never becomes irrelevant (we're looking at you, John Legend and Chrissy Teigen), your costume isn't a true pop culture pick if it isn't a take on a brand new famous couple. Look no further than the recent influx of speedily engaged celeb couples for a respectable Halloween costume, but don't count out your favorite TV and movie pairings just yet. Thanks to 2018's revival of the rom com and welcoming back of some classic characters, representing a fictional duo ought to be just as fun as copying the looks of a real-life couple this year.

The possibilities of pop culture costumes are endless, but we have several below to get your mind stirring.

No matter how you feel about this duo, nothing says "celebrity couple in 2018" like pop sensation Grande and Saturday Night Live star Davidson. The two made headlines for their quick engagement and avid social media posts featuring each other. Pull off one of Grande's trademark high ponytails and don a bleach blonde wig to fit Davidson's current look for your "Grandson" ensemble to steal the show at a Halloween party.

When we last saw the Maisels in Season 1 of the Amazon Prime hit, they had just hooked up after being separated for the entirety of the season. Joel then caught enough of Midge's triumphant comedy act to feel simultaneously betrayed and awestruck, while Midge ended the series on a victorious note, hinting there's more conflict in store for this seemingly on-again couple. They might not be the happiest pair at the moment, but dressing as these Upper West Siders will fill in any fellow revelers about The Marvelous Mrs. Maisel if they've yet to watch it.

If you're pressed for time and have multiple costume parties to go to (after all, Halloween is on a Wednesday this year), you can attempt this sneaky double dip and take advantage of this onscreen-turned-IRL couple. Riverdale fans speculated about Sprouse and Reinhart actually dating as long ago as March 2017, but the two basically confirmed their real-life relationship in a subtle way this past summer. Try copying their Met Gala looks for one party and dress as their Riverdale equivalents Jughead and Betty for your next hangout.

If your Halloween costume is a family affair this year, matching supersuits from The Incredibles are a must, but if it's just you and your partner out on the town, the Mr. Incredible and Elastigirl outfits are a fun pick following the summer release of Incredibles 2. Finding exact replicas of the married couple's suits could be a pricey costume idea, but you're only an adorable superhero couple once, right?

Whether you and your SO want to reenact the looks from their engagement announcement or hunt down a wedding dress and military regalia, dressing as Harry and Meghan will never be as topical as it is this year. At this time in 2017, they had only made one official public appearance together, and their engagement was confirmed in late November, spoiling any opportunity to dress as the couple at the height of their wedding plans. We may have to wait until Prince George gets married to rock a relevant royal couples costume again, so grab this opportunity while it lasts!

The glamorously low-key couple were a little more public in 2018, and their Met Ball outfits from the past two years are what Halloween costumes are made for. If you have a passion for sewing, recreating J. Lo's 2018 gala dress can be your special autumn project, but taking the easy way out by tracking down a bodysuit and a Yankees jersey is a simpler choice that I definitely wouldn't judge.

When will this couple not be relevant? From Teigen teasing about Legend's similarity to Arthur the aardvark to Legend being the dorky dad we all love, representing this longtime pair comes with Legend's EGOT-making Emmy award this year. Have your phone at full charge to emulate Teigen's hilarious tweets and create some shiny hardware to resemble Legend's newest award. Teigen would probably approve if you went trick-or-treating with an Arthur doll, too.

The onetime enemies have since kicked off a budding romance, and their style game is always on point. Riverdale creator Roberto Aguirre-Sacasa has even tweeted out a stylish sneak peek of the two in Season 3, so if you want to emulate some good vibes for the couple in upcoming episodes, rock the same Serpents jacket and black lacy dress seen in his photo. Riverdale's third season premieres three weeks before Halloween this year, so there's also the possibility of Choni rocking outfits in these episodes that are too good to pass on by the time Halloween rolls around.

These two are the definition of "it's complicated," but underneath all of their issues is a deep love for each other. What they admire about each other is often what they can't stand about the other, so more couples can probably relate to them than you may initially think. Instead of dressing in their typical everyday clothes, you could try recreating Earn and Van's German festival looks for a more recognizable costume.

Their love affair was doomed from the start, but Avengers: Infinity War's brief interlude of Wanda and Vision's romantic Scottish getaway is totally worthy of a spinoff movie. After the superhero hit's bleak cliffhanger ending and so little information about its 2019 sequel being out there, reminding fellow Marvel fans about Vision and Scarlet Witch's quiet bond will be safe territory to tread. While a DIY Scarlet Witch costume is definitely possible, there are adult-sized Vision costumes to help you capture his intricate face.

Recreating this couple's comfy pose on the Crazy Rich Asians poster is a must. Besides entailing clothes you probably already have in your closet, dressing as Rachel and Nick celebrates the movie being the box office sensation of the summer. We're still holding out for Constance Wu or Henry Golding to score a SNL hosting gig, but having a Halloween photoshoot in their costumes is good enough for now.

12. Lara Jean Covey & Peter Kavinsky ('To All the Boys I've Loved Before')

If you're on a college campus this Halloween, you'll probably spot several Lara Jean and Peter pairs, but TBH, I don't mind the easy, widespread appeal of this costume. The teen sweethearts soothed our cynical hearts in the Netflix hit this summer, and pulling off their looks ought to be just as sweet. Author Jenny Han has broken down the style of her heroine on Twitter, making your reconstruction job a breeze, while your Peter Kavinsky equivalent requires little more than an old sports team hoodie from high school.

If you can make an Emily Blunt and John Krasinski couple costume work, be my guest, but their horror movie equivalents as Evelyn and Lee in A Quiet Place will probably be easier to achieve. The look of Krasinski in Lee's red sweater has become iconic, and if paired with Evelyn's maxi dress and cardigan, your post-apocalyptic vibes are complete. Bonus points if you and your date take up sign language in time for your Halloween party.

Yes, couples recreating Jack and Rebecca's wedding day look exist and are adorable, but Randall and Beth deserve more holiday love. If the '70s just aren't your style, embracing the modern-day look of Mama and Papa Pearson 2.0 is the perfect solution. You may want to prep Beth's "I call marriage" speech or any of Randall's emotional monologues to entertain your fellow partygoers. Seeing as Thanksgiving is the next big holiday after Halloween, the Randall of your pair can also get into character with a sexy "Thanksgiving dad" dance.

Before To All the Boys I've Loved Before made you cry about your lack of sweet high school romances, Set It Up was the summer's first Netflix charmer. Dubbed by Twitter fans as the new Tom Hanks and Meg Ryan, co-stars Glen Powell and Zoey Deutch played a pair of overworked assistants striving to set up their bosses. Your best bet for recognizability with this look is to track down the characters' clothing from Harper's friend's engagement party. Of course, the look also has to be topped off with a pizza box.

In 2017, Bonnie and Clyde co-stars Faye Dunaway and Warren Beatty were the awards show pair who inspired a Twitter frenzy when they incorrectly announced La La Land as the Oscar-winning Best Picture. At the 2018 Emmy Awards, it was Outstanding Directing of a Variety Special winner Weiss and his girlfriend Svendsen who caught viewers' attention for a far better reason. When accepting his award onstage, Weiss asked Svendsen to marry him, warming the hearts of hundreds of Hollywood cynics in the audience. Find yourself a dazzling dress and get your guy a long-haired wig before building a DIY trophy to complete the award-winning look.

Happy Halloween, pop culture junkies! May your nights be filled with plenty of clever cultural references and photo opportunities.