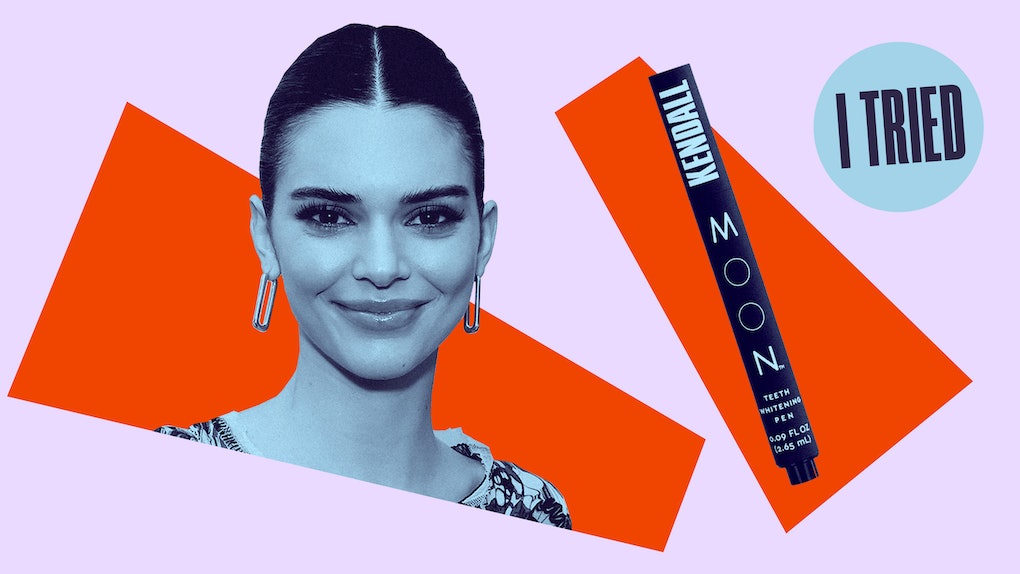 You've been there before: You're scrolling through your Instagram feed when you see your favorite celeb post about their favorite new product — a face serum, vitamins that will make your skin brighter, or a specialty food service. You can't help but want to be like the stars, but are the products worth it? In Elite Daily's I Tried series, we put it all to the test. We're trying those products as well as celebrities' health and wellness tips, recipes, and life hacks. We'll do the leg work and tell you what living like your fave star is really like.

If there's one thing you can say about the members of the Kardashian-Jenner family, it's that they're hustlers. From gummy bear vitamins to morning sickness pills, these celebs are famous for pushing products on Instagram to increase their already astounding net worths. I typically scroll right past posts of their "favorite things" (like those organ-squishing waist trainers), but recently, there was one product that stood out to me: a teeth whitener co-created by Kendall Jenner. So, I decided to try Kendall Jenner's Moon teeth whitening pen to see if I, too, could achieve a smile worth flashing to the paparazzi.

Having experimented with nearly every whitening toothpaste, strip, and LED kit you can think of, I'll admit the idea of a pen you can keep in your purse for instant touch-ups intrigued me. As it turns out, that's precisely the reason Jenner teamed up with Moon Oral Care to create this product.

“I’m always on the go, so I really wanted [to create] something that was a quick and easy thing," Jenner told British Vogue about the collab. "I wanted to feel like I could throw something on and it would work almost instantly.”

But knowing Jenner is the face of — and one of the brains behind — the brand wasn't enough to completely sell me on trying the product. (If that were the case, my cabinets and shelves would be overflowing with KarJenner-backed stuff.) Upon further research, I learned the whitening pen is vegan, PETA-certified cruelty free, and free from parabens, artificial flavors, and sodium lauryl sulfate. The company's website claims the pen (which is $19.99) can brighten your teeth instantly, as well as whiten them over time. With all this info in mind, I felt ready to give this product a shot.

Moon's instructions recommend using the product up to twice a day for a full two weeks, so that's exactly what I did. But did the pen live up to the hype? See for yourself:

The first thing I noticed is the chic, black-and-white packaging. The sleek-looking pen, which comes in a slender sleeve, is about the size of your typical liquid concealer. It's something I wouldn't be embarrassed to leave out on my bathroom counter; in fact, I decided to store it in my toothpaste cup because the minimalistic aesthetic really worked in my bathroom. It's also small enough to stick inside your purse or even your pocket if you wanted to touch up on the go.

As for the pen's ingredients, Jenner hand-picked the "Elixir III," which is an antioxidant blend of lavender oil, strawberry fruit extract, and honeysuckle flower extract. Lavender has been shown to have antibacterial properties, while strawberry extract contains the enzyme malic acid, which is believed to be a natural tooth whitener. Further, the anti-inflammatory properties of the honeysuckle extract is believed to soothe the gums and prevent irritation during the whitening process. All combined, the Elixir III is supposed to deliver immediately-noticeable results. Further, the sodium carbonate peroxide in the product is meant to gently and gradually whiten your teeth further with regular use. But don't expect miracles here; research has shown that peroxide simply removes surface stains. That means it's not likely to totally transform the shade of your teeth, but it could get them back to what they looked like before you started chugging coffee and red wine (*smiles sheepishly*).

While the product's flavor is described as "vanilla mint," I didn't really taste the vanilla. That said, it was pleasantly minty, with no weird or chemical aftertaste like some whitening products have.

In order to see if the product really worked, I took this photo right before I used the pen for the first time:

Moon's website recommends consulting a dentist about your oral health prior to using the whitening pen, particularly if you're going to be using it for longer than 14 days. The company also notes that you should stop using it if any irritation occurs. Since I don't have any gum disease, enamel erosion, or severe decay, my dentist felt comfortable with me introducing the product into my regimen, so I was clear for takeoff.

Remember those Stila pumping lip glosses? Applying the Moon pen is a lot like using one of those. Twice a day, all I had to do was press the back end of it a few times until I could see it had dispensed a clear gel onto the brush head. Then, I swept the brush over my chompers (while taking care to minimize contact with my gums), let it set for 30 seconds before closing my mouth and going about my life. With no strips to remove, no lengthy waiting time, and nothing to spit out, the process could not have been simpler. The hardest part was just waiting 30 minutes after applying to eat or drink anything, which is what the instructions advise.

There is just one tiny catch: Moon warns that you shouldn't do anything that could negate the whitening effects of this product — and that includes drinking coffee or red wine, which just so happen to be my two favorite beverages. (Full disclosure: I definitely "forgot" and cheated a few times during my two-week experiment.)

After using the Moon pen for just one week, what impressed me the most was how it instantly brightened my smile. Mere seconds after applying the gel, I could see a subtle foaming effect on the surface of my teeth, and it looked like some stains were being gently lifted (see the above photo for reference). Was this just my imagination? Who knows. But it definitely got me thinking this could be a life-saver right before jetting off to a dinner date or snapping a selfie for IG.

After two full weeks of using the Moon pen twice daily, I can't say I noticed dramatic results in the whiteness of my teeth between Day 1 and Day 14. However, I was impressed with the short-term effects I observed after each session.

I also really appreciated that the whitening pen is small and works in less than one minute, meaning you can whip it out anytime, anywhere (as long as you don't feel awk keeping your mouth open for 30 seconds right after). Better yet, I experienced zero sensitivity in my teeth or my gums — something I've struggled with in the past with other whitening products.

The bottom line? If you're seeking to create a striking, lasting difference in the shade of your teeth, you might need a more aggressive product. But the Moon teeth whitening pen could be worth it for the convenience factor and instant gratification. I, for one, plan to keep using the pen on an as-needed basis for quick touch-ups.

The word's still out on whether the Moon pen will give me Jenner-level confidence, but I'm willing to keep using the product to find out.