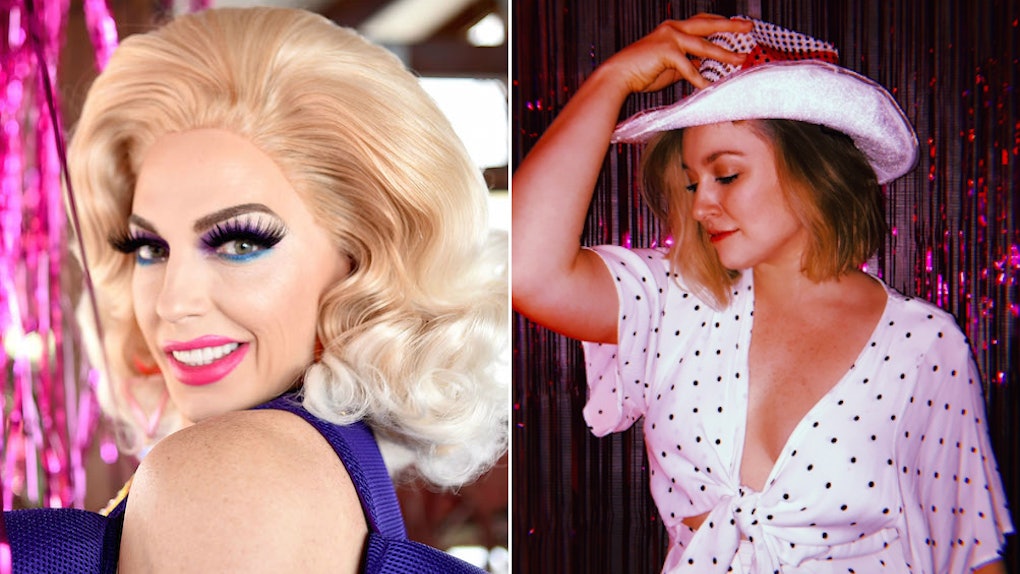 What happens when a drag queen goes glamping with 30 strangers? A hell of a lot, that's what. And all of it brings unexpected experiences. Joy was the main takeaway the campers at Camp TAZO packed in their bags after a weekend of glamping in Marble Falls, Texas, with Alyssa Edwards (along with their hand-bedazzled, fringe-ladened Camp TAZO capes, of course). The three-time RuPaul's Drag Race contestant has proven that it doesn't matter if you're always a contestant and never a winner on the LGBTQI+ staple, as over 5,000 of her fans applied for a bunk in one of Camp TAZO's cabins after she was announced as the camp director. I was one of those campers. Yup, I tried glamping with Alyssa Edwards, and what I thought was going to be a random weekend filled with a few fun activities turned out to be an identity-affirming experience I won't soon forget.

Context: Unless you count the time my Girl Scouts troop had a one-night sleepover on a camping ground, I've never been camping. So imagine the intrigue on my family's faces when they learned I was going on my first camping trip with a drag queen. (They weren't surprised it was glamping, though. Even when I don't plan it, I remain painfully on-brand.)

We all, at some point in our life, need to take a moment where we just kind of step away from our normality.

This trip required me to break out of my comfort zone from the beginning, which was fitting, considering that was the camp's motto (along with #BrewTheUnexpected). The group of 30 campers from all across the U.S. rode a school bus from San Antonio to Marble Falls to get to the camp on a Friday, completely ready for the trip ahead.

When we arrived at the camp, before we were reunited with our luggage and could make our way to our assigned TAZO-tea inspired cabins (I told you this was glamping), we played some icebreakers and earned our first camp badges. (Was I back in Girl Scouts?) There, I started to learn the stories of some of these campers and how they ended up at Camp TAZO.

They were all hand-selected by Edwards following an application process that involved a video submission. Edwards reviewed each video herself, which she made clear the first night of camp, when she pointed out specific things in each of the campers' videos that moved her. And trust, these campers have moving stories.

There was a body positivity vlogger on this trip. We went canoeing together and both tragically (read: hilariously) destroyed our phones when our canoe tipped over. (Her phone is still in that damn lake. RIP. A bag of rice could not save mine. Also RIP.) There were new mothers, seasoned mothers, and one grandma whom I'm convinced could heal the world with her hugs. (Trish gives 15/10 hugs.) There was one camper who moved back to their largely homophobic hometown to be the advocate for the town's queer youth they wish they had when they were younger.

Put all of these people on a camping ground guided by woke counselors and an on-site therapist (oh, and one of the world's most famous drag queens whom they all idolize), and you can be sure of a few things: 1) this weekend was going to be gloriously queer as hell and 2) we weren't leaving Texas without growing a little first.

As Camp TAZO Program Director Brady Gill broke down the four core values of the camp that all fell under the umbrella of reconnecting with your truest self, he already had some campers in tears. Not tears of sadness or joy, but rather tears of relief. This was the first of many moments during which campers were given the space to exhale.

When I spoke with Edwards (whose out-of-drag name is Justin Johnson) about the first moments of camp when Gill had campers crying, she said she was just as surprised about the meditative structure of the camp as the campers were.

"I didn’t think it was going to be nearly as structured," Edwards tells me. "Meaning, you guys have other counselors that are here to assist and wrangle everyone, and they have y’all busy at all times, and you’re doing so many cool activities."

Given the motto of the camp (#BrewTheUnexpected), she knew the weekend was going to include its own surprises. But this camp basically served as a queer mental health retreat, which none of us expected going into the weekend. (I'm bi, hi.)

Everybody is doing something that’s out of the ordinary schedule of their daily life, and I have an appreciation for that. Because I think we all, at some point in our life, need to take a moment where we just kind of step away from our normality and experience the — I don’t want to say unthinkable, but something that you’re like, ‘I didn’t see myself doing this.’

One thing Edwards definitely didn't see herself doing was ziplining into camp in full drag. Yes, you read that correctly. Alyssa Edwards ziplined over a lake as her big entrance to Camp TAZO.

Here is that moment in all of its glory.

After this moment, Edwards sat down with the campers for the first time. We all gathered around a bonfire, TAZO tea mocktails in hand, as campers were given their first opportunity to speak with their icon.

This talk lasted hours. Before Edwards made her entrance, the camp's head counselor, Nicoletta, had every camper throw leaves/sticks/whatever they could find on the beach into the fire to represent things they do that no longer serve them, so they were already in a sharing kind of mood.

I sat and watched this group of people rack their brains thinking of what parts of themselves they wanted to reveal to their icon. Undoubtedly, Gill's message of being your most authentic self all weekend was ringing in their ears as they thought of what to say.

Sometimes, the unexpected can be a little frightening.

This fireside chat set the tone for the entire weekend. Throughout all of the glamping activities, campers were encouraged to present their most authentic selves. (There was some kind of meditation before each activity to help us get to that point of emotional authenticity.)

Even for Edwards, a drag superstar, being her most authentic self all weekend was a scary thing.

"On the way here, it all hit me," she continues. "I was like, ‘Let any doubt/self-doubt, Justin, anything that could potentially be a reservation or a wall or something that could hold you back, let it go.’ Right before you get out of the Mesquite County line, just throw it out the window."

So here we were, a bunch of queer people/allies thrown into a room full of strangers, the only thing seemingly connecting us being our shared love of Alyssa Edwards. But by the end of the weekend, lifelong friendships were made. And I'm now convinced that any grown person who needs a break from life could have all of their emotional ails healed by attending a camp made for adults.

That's why I think the campers who cried on day one were so moved: it was clear to us that this was the weekend where we could finally just breath. Just be ourselves naturally, whatever that meant for each of us. Throughout every camp activity, we got to just be. And that made lots of room for joy to steep in.

Edwards tells me that she knew she was going to have fun this weekend, but she didn't realize how freeing it was going to feel for her as well. She was at work, after all.

"I expected to have a good time and to share a lot of laughs. Not nearly as much as I already have," she says. "Like last night at the campfire, that was so much fun. And it was impromptu, it wasn’t planned. I took my earrings off. We watched a video that Chris [one of the men in the Haus of Edwards] videoed, and I could see in the video, I’m genuinely just having a ball."

"That’s when you break character and you just allow yourself to be your authentic self," she adds. "It becomes a little more real, and I knew I was going to have a good time. Like I said, that was my expectation. Maybe this has exceeded all expectations and hopes." Same.

Yes, we were glamping. The meals were delicious (and, at times, fully vegan) and the rooms had AC and heat lamps when needed (trust, they were needed). The night of the talent show (for which some campers dressed in full drag), a glam squad came in to do our makeup, and there was a glam closet full of clothes and wigs for us to borrow. There was even a canTEAna decked out with faux fur rugs and neon Camp TAZO signs that was set up for us to relax in.

But outside of all of these luxurious camp accommodations, campers were encouraged to spend every moment of the weekend being whatever version of themselves they wanted to be.

All people really want to feel at the end of the day is that they're supported and loved by some kind of community. This weekend acted as that, and that meant the world to a lot of the campers who don't feel they have it otherwise. For me, this was the first weekend of my life where I unapologetically presented myself as the bisexual woman I only recently told my family I am.

In the last year, I started telling my family and friends my full truth. These conversations typically came with a slew of questions, because of course, my loved ones are going to be curious about this new reveal. But at Camp TAZO, there were no questions asked. I could just be among my fellow queers and enjoy myself.

More like this
I Tried Megan Thee Stallion's Hot Girl Smoothie Recipe & It's My New Fave
By Abby Monteil
Will BTS' Camping Collection Restock? Here's What To Know About The Helinox Collab
By Marisa Casciano
Demi Lovato Revealed She’s Pansexual & Says She “Likes Anything, Really”
By Caroline Colvin
Stay up to date