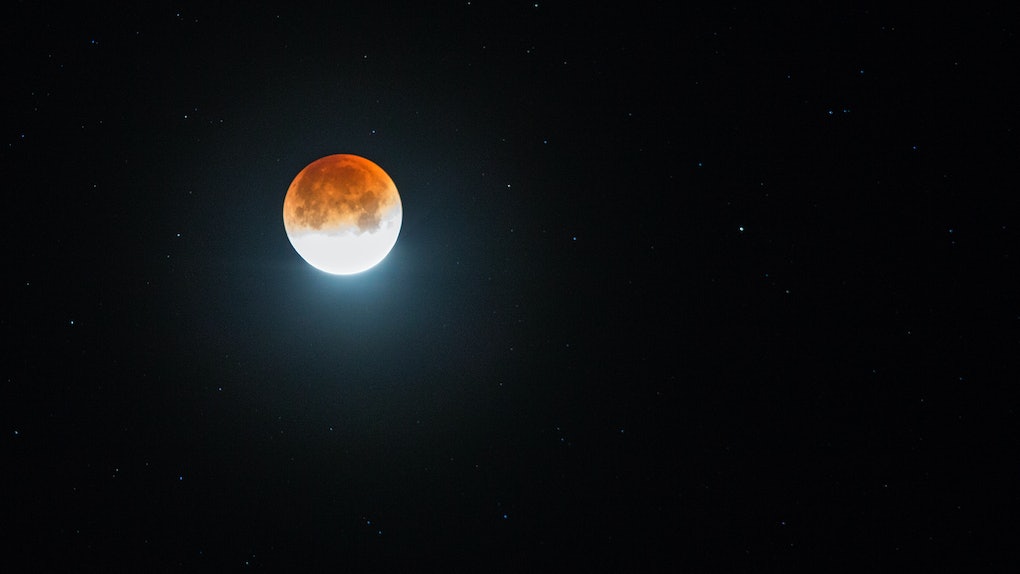 You've probably heard the saying "once in a blue moon," to indicate something happening that is very rare. To say that the kind of super blue blood moon on Jan. 31, 2018 happens once in a blue moon is pretty darn accurate, as not only is it an actual blue moon (the second full moon in a month) it is also a lunar eclipse and a blood moon. As a way of marking this astrological configuration, happening for the first time in decades, I tried doing a super blue blood moon ritual just as the eclipse was at its peak, as rumor has it, the super blue blood moon is also a particularly potent time to draw energy and guidance from the cosmos. Or at least so say the believers in the impact of celestial phenomena on the lives of us mortals, anyway.

As for my ritual, I got guidance and information from metaphysical expert and great believer of moon power Dr. Athena Perrakis of Sage Goddess, who told Elite Daily how to best honor, capitalize upon, and yes, ritualize this extraordinary event in our sky.

"The super blue blood moon is happening in Leo," Perrakis says, "which is highlighting power in relationships."

"Leo is a sign of power, probably the most fearless sign," Perrakis says. She added that because the moon is a feminine sign, the power it brings tends to highlight the subconscious, and bring what you are dealing with or hoping to manifest to a more intimate and internal place. "It's a time to look at things inside yourself."

Dr. Perrakis advised that the ritual for the super blood moon can be used to build a strong, powerful foundation for whatever it is you want to build in 2018, be it a professional goal or an intimate partnership of some kind, and also as a time to express gratitude to the universe for the abundance it provides already.

Dr. Perrakis informed me that the best time for me to see (or at least be in the midst of) the super blue blood moon eclipse would be between 6:48 and 7:02 A.M. She gave me some ideas for the ritual, and from that, I devised my own plan: to do a meditation and visualization about a particular writing project I am delving into, to do a simple two card tarot spread, to charge a rock that I use for creativity, and yes, to get outside in the cold to bask in a little moon-glow.

Here's me, grumpily starting my super blue blood moon ritual, much earlier than I'd like to be up. But I'm just that committed to the moon.

Dr. Perrakis suggested meditation to visualize what you are creating, and to bless the moment of conception for whatever that is, be it the moment a relationship began, or the inspiration for a creative endeavor. I sat for a few minutes and visualized my writing project, what I hope will one day be a book, and said thank you to the universe for the moment it was conceived, as she advised. I also imagined light and energy being poured into the future book, and did a brief guided meditation about being "open to receive."

This is what the sky looked like just before I did my meditations. Pretty, no?

After that, I did a simple tarot spread, which meant just pulling two cards from the deck. Dr. Perrakis, who also reads tarot, told Elite Daily that eclipses are times that reveal what has been hidden, that it is a time to be particularly honest and forthright, and to be ready to have things revealed whether you want them to be revealed or not.

I am pretty new to the whole tarot deck thing, but I interpreted their meanings by using a book.

My particular tarot guide said that the judgment card means rebirth, inner calling, forgiveness, and surrender, and the justice card symbolized fairness, karma, and cause and effect.

I interpreted the judgement card to mean that I felt the project I was embarking on felt like a calling of sorts, and I took the justice card to simply mean that what I put into my work, I will get out of it. A kind of reminder to stick to it, despite my doubts.

Dr. Perrakis also encouraged me to allow myself to be in the presence of the Moon, and to go put my feet on actual ground, not concrete, so after tarot, I headed outdoors.

And yeah, I braved it. I took off my slippers off in the freezing morn and stood right on the freakin' Earth outside my building.

I then walked along looking for the eclipsed Moon, but I couldn't find her. Instead I just enjoyed the sky, which was already brightening.

When I came back inside, I wrote a little letter to the moon, expressing my gratitude and my willingness to receive energy for my writing project.

Again, Dr. Perrakis expressed just how important a time it was to express and consider receptivity and gratitude. Such an event as the super blood moon, so powerful, rare, and beautiful, as Perrakis says, "is the universe saying look what I did for you!"

As for me, if nothing else, the ritual felt quite lovely and centering. But I did spend a solid hour on my writing project before work this morning. Whatever works, right?