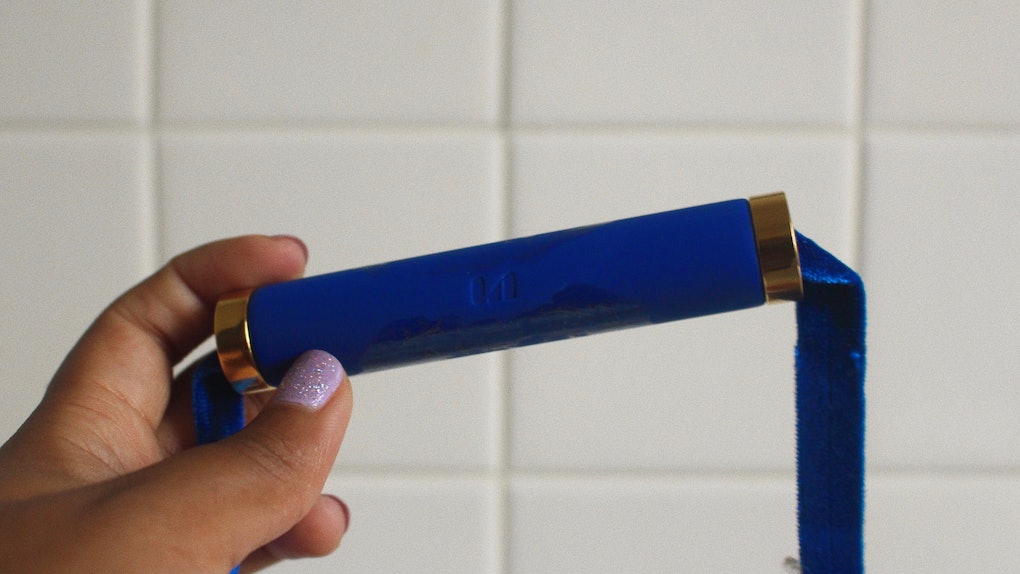 There is no delicate way to say this: My turn-ons and sexual tastes are kinky. Period. But even though I read up on sex pretty regularly as a dating writer, I'm not an expert on everything that goes down when you get down. I am, however, a naturally curious person, and I'm always down to explore new things. That's why I tried a bit gag in the bedroom, and it added just the right amount of edge to make a routine sex session with my girlfriend feel totally thrilling. Sex toy company Unbound reached out to me about trying its gag, called Bit. The chance to play with Bit felt like a prime opportunity to sate my sexual curiosity and experiment further with restraint play, so I happily agreed.

By definition, restraint play is an umbrella term in BDSM for "any type of activity that restricts typical movement," Polly Rodriguez, CEO of Unbound, tells Elite Daily. Examples of restraint play include the use of handcuffs, silk restraints, and spreader bars, as well as rope bondage. "Leather strap bondage is a popular way of restraining somebody, because although it is more expensive to purchase than rope, it tends to be more comfortable," Andre Shakti, a sex educator and professional sex worker, tells Elite Daily. Apart from it being easier to take on and off because of its buckles, Shakti adds, "It’s also very thematic. It’s very sexy."

And last but not least, there are the many different kinds of gags used for restraint play: ball gags, O-ring gags, and bit gags, to name a few. While at first thought, gags might feel a little intimidating, my experience with Unbound's bit gag was hotter than I anticipated. So hot, that it's something I'd definitely use again during sex.

Rodriguez takes it a step further, explaining that restraint play actually celebrates the transfer of control. "It requires trust, communication, and vulnerability — all things that are really important components of pleasure," Rodriguez says. "By tying someone’s hands behind their back or restricting their ability to speak, you’re magnifying the need for communication and trust."

Whether you're just making out or tying your partner up with rope, trust and communication during sex, especially BDSM, is key. Prior to playing, both Shakti and Rodriguez recommend partners establish a non-verbal safe word — because it's going to be hard to speak up if you have a gag in your mouth, you know? My girlfriend and I decided on three hand taps as our non-verbal safe word. Taking Rodriguez and Shakti's advice again, we also made sure we had a pair of scissors nearby to cut the ties of the sex toy in case of emergency. (These safety precautions are included when you buy Bit, in a list labeled "Bits of Wisdom.")

Last but not least, Shakti advises: “If you have somebody in bondage or somebody gagged, you should never leave them alone. Always you make sure you are in the room with them, just in case something goes wrong.”

Both my girlfriend and I wanted trying out the new sex toy to feel natural. So, one lazy afternoon in bed, when things started getting hot and heavy, we decided to pull out Bit.

Because of our height difference, I sat at the edge of the bed and Genna stood behind me, something she's done countless times before. But instead of zipping up my dress or clasping my necklace for me, she gently placed the gag bar in my mouth, pulled the velvet ribbons up, and tied them behind my head. Then, she checked in with me to make sure I was comfortable. I adjusted the bar in my mouth: snug enough to make me drool, but loose enough that I could breathe out of my mouth, too, since it was my first time using a gag toy.

As the dominant partner, my girlfriend took her time to tease me, kiss my sensitive spots, and get me off. Having a bit gag in my mouth as she did this was a new experience for us, since spicy banter plays a regular role in our sex life. The fact that my girlfriend could say such dirty things to me and all I could do was moan in response? It really highlighted the dom-sub dynamic and made the experience extra hot.

Fortunately, she felt similarly. When I asked her how she felt during our restraint play session, she said, in a word, "Powerful." She liked how pretty the gag was and how nice I looked in it, especially when she was tying it from the back. And finally, she told me that she enjoyed being the only one who could talk. Apart from that sounding like a typical dom answer, that's also a classic Gemini answer if I've ever heard one.

Maybe you and your partner are like my girlfriend and I, and have hooked up a few times with handcuffs in the mix. Maybe you and your boo seldom do anything kinky besides the occasional soft spank. Or maybe, you've graduated all the way up to rope bondage and spreader bars. Whatever the case, I definitely recommend exploring restraint play by trying out a gag — a sexy way to be restrained that won't feel too restrictive at all.