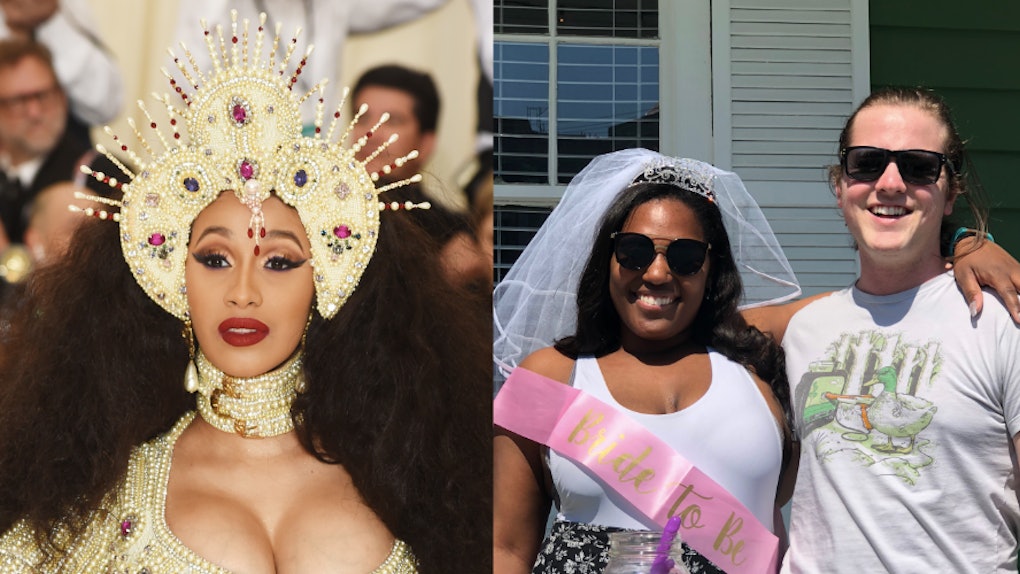 I Redid My Engagement Just Like Cardi B & Offset — Here's Why

Cardi B and Offset got engaged in October 2017 — or so we all thought until recently. When news broke earlier this week that the couple secretly married last September, many fans were confused — and some felt downright duped. But personally, I understood exactly why Cardi B and Offset redid their engagement, because my partner and I did the same thing. We both wanted to have fairytale proposals on our own terms.

I don’t know about the inner workings of Cardi and Offset's relationship, but based on what I see, I wholeheartedly relate. Cardi and Offset had a seemingly whirlwind romance. It was filled with outspoken adoration, musical collaborations, and an undeniable chemistry. The bumps that they've alluded to along the way and the dirt that people try to dig up about their bond doesn't matter. What matters is that they matter to each other.

My relationship parallels theirs on multiple levels. My partner Bob and I were best friends who fell in love. Our relationship isn't without pitfalls, but we always talked about how much we loved one another, and how this love was one in a million.

And then the drama came crashing in. My partner's family and childhood friends had opinions that started to wear us down. Depending on how you asked, either he changed, or I'm a gold-digger, or he spends too much time with me. One person even told us that it was a problem he doesn't tan by the pool anymore.

Little do they know that the person they believed my partner to be was a mask. The person they claim to have known is one that I would have never befriended in the first place. They think he's a shallow, conservative party boy whose worldview merely stretched as far as the Florida beaches and the boardwalks of Disney World. Meanwhile, the person I met has been a sensitive, club-hating, liberal with big dreams of traveling the world. The depth and vulnerability my fiancé showed that first afternoon was the start of a great friendship, and now, a wild love story. Nobody will ever know your most intimate thoughts and dreams unless you feel safe sharing them.

When we got engaged, we wanted to do so quietly because that just felt more like us. He proposed at the bar where we had our first date, and before we could even call and text our loved ones, a stranger — who I’d never met — took photos of our proposal to share with the world. That stress soured a memory that was supposed to be beautiful. It reminded us that our relationship could be mere fodder for gossip for outsiders. It’s easy to see why Cardi and Offset would want to keep their relationship private.

People didn't change their behavior after we got engaged. I still got called a gold-digger (even though I'm the breadwinner in our relationship). I still got called "crazy." Someone even made a truly vile, fake Instagram profile just to troll our wedding hashtag with hateful memes.

This isn’t to say I’m without fault. I’ve had my screw-ups, my missteps, and my fair share of unbecoming moments. I'm only human. Over time, I've made the commitment to block out negativity and focus on the friends who do support our love. Cardi and Offset are a beautiful example of sticking with someone because your love is greater than the bumps along the way.

Bob and I realized that hoping that “haters” would change their mind was useless and that we shouldn’t avoid our favorite spots to avoid people who act like paparazzi. He confided in me that he wanted to propose to me again, and that it would happen when I’d least expect it.

That moment came in the form of an incredibly happy and unforgettable proposal in front of the Migos — one of our favorite music groups. My fiancé thought the same things that Cardi said in her announcement yesterday, regarding Offset wanting her to “have that special moment that every girl dreams of when he got down on his knee and put a ring on my finger and he did that for me!!” I had that special moment, and just like Cardi B, it happened at a Migos concert.

The people closest to us see the value, compassion, and dedication in our relationship; that’s undisputedly what matters at the end of the day. The outside world — people looking in and analyzing the snippets they get wind of — will always have opinions. And although the sting of criticism that feels unwarranted can hurt the best of us, I’ve learned that getting angry is a waste of my passion. It's so much better to channel that energy into something positive with my family, partner, friends, and career.

Earlier this week, Cardi uploaded a screenshot from her Notes app to Twitter, where she said,

There are so many moments that I share with the world and then there are moments that I want to keep for myself! Getting married was one of those moments! Our relationship was so new breaking up and making up and we had a lot of growing up to do but we was so in love we didn’t want to lose each other.

I understand, quite literally for better or worse, exactly what Cardi means. Harshness and judgment can guide even the strongest personalities into hiding, especially when you don’t want your intimate moments to become fodder for gossip. Shared quiet moments and bold displays of love are each beautiful in their own way. We all deserve the engagement of our dreams on our own terms.

Cardi B’s announcement is a blatant, no-effs-given reminder that no one is entitled to the inner workings of your relationship — especially those not in your intimate circle. So while I may not relate to being a worldwide sensation, I can surely relate to the Invasion of Privacy of my own.

More like this
Is Katie Thurston Engaged After 'The Bachelorette'? Her Instagram Is Sus
By Joyann Jeffrey
Sophie Turner & Joe Jonas' Pics From Their Vegas Wedding Are Such A Vibe
By Cianna Garrison
Tristan Thompson's Mother's Day Instagram For Khloé Kardashian Was Straightforward
By Lydia Wang
Stay up to date