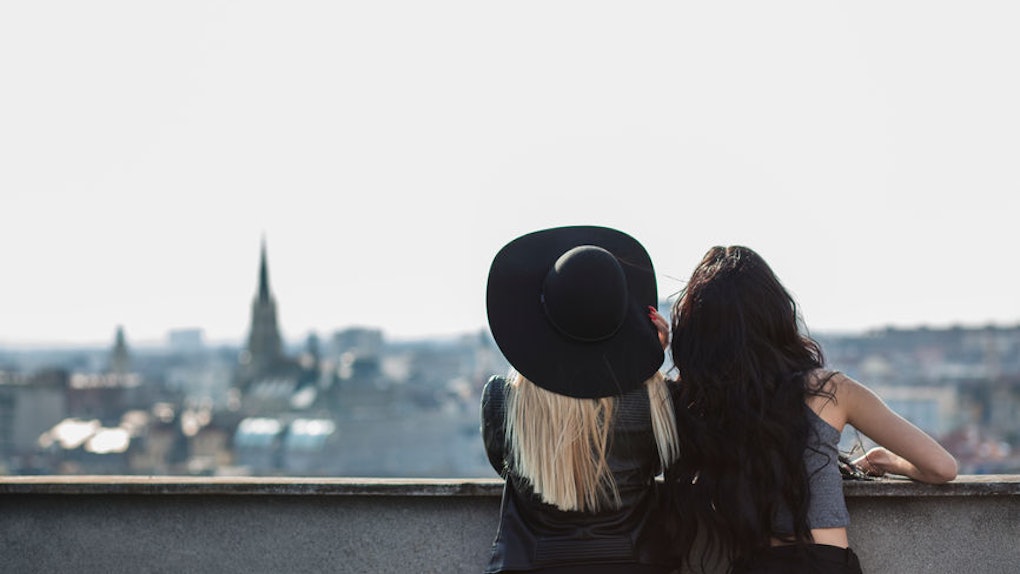 Strangely enough, there’s no etiquette for meeting your former partner’s former partner. Maybe it’s because no advice columnist would ever dream that two women who unknowingly dated the same man at the same time would want to meet for coffee. But that's what was happening: I was befriending the "other woman" my ex dated during our relationship. Even though the thought of meeting her was uncomfortable, I already sensed she was on my side. I arrived at my favorite cafe ready to vomit from nerves, steeling myself to engulf Emma* in a sweaty bear hug the second she walked through the door. Even though she was wearing a strained smile and an emotion-pinched expression, I hoped it was the right decision.

"This is so weird,” I muttered, face pressed into her shoulder.

Five days after I walked away from my long-distance boyfriend John*, Emma emailed me. At first, she was careful not to mention John’s name — only that she had recently ended a relationship with her boyfriend of nine months, who had been gaslighting her about his involvement with other women, and had even started physically threatening her. She made it clear she had gotten out of the relationship and was safe, but wanted to make sure the other women in his life were equipped with enough knowledge about his behavior to make their own informed decisions. Later, I learned she had sent out similar emails to several other women she had confirmed he had been cheating on her with, and a few more that she worried he was manipulating into similar situations.

I read her email at 2 a.m. She finished it with a plea not to discuss the situation with any of the men in my life, both for her safety and mine. (“A few weeks ago, he would have been the first person I would have turned to when I got an email like this,” it read.) I had a horrible sinking feeling that it was about John, but it was too late to respond and ask for a name right away.

It's embarrassing to admit now, but I found it hard to believe Emma's intentions were pure at the time; I wondered if this was some kind of "jealous" ex-girlfriend situation. I mean, what kind of woman jumps back into the nightmare of a previous relationship to fish out someone she doesn’t even know? Still, everything she said, particularly the way she described how he’d duck her questions when she’d try to gain some clarity on the situation, rang true.

I broke up with John after some light social media research (read: Instagram stalking) revealed he hadn’t been as faithful as he claimed to have been on a recent business trip. Emma's stories of physical violence mirrored my own — the last time I visited him, he "playfully" pulled a knife on me. And throughout our relationship, there were dozen of broken promises and stories that failed to add up. I hoped that if I met Emma, I could learn more about what had really happened in their relationship.

Four years earlier, I met John through mutual friends. It took three years before he confessed he had feelings for me. Even before we started dating, I admired his ability to hold a room and charm everyone. We had the same taste in music and movies. Our schedules seemed to jive instantly, meaning we had plenty of adventures together while still allowing me enough time to concentrate on my career. I liked him a lot, and he seemed equally as taken by me. Starting a relationship felt like a logical next step.

I was so comfortable with John that it took me months to recognize the more controlling aspects of his personality: He'd love-bomb me with texts and calls, then slow them down to make me feel insecure. He'd ignore me while showering other women with attention. Whenever I brought any of this up, he'd insist I was "crazy." Near the end of our relationship, I asked if he had ever been tested for sociopathy. He told me not to ask questions I didn’t want to know the answer to.

Now, four years later, emotionally bruised, I needed to know. Emma and I both needed each other to fill in the blank spaces in our stories. So, after several long seconds of frantically hugging in the coffee shop, Emma and I broke up, brushed tears off our nearly identical black dresses, pulled back our similarly cut hair, ordered a round of iced tea, and began a conversation that would last nearly a year.

At first, I attempted to treat the encounter like a business meeting, but once we confirmed we each knew the same John, we quickly devolved into a shell-shocked giggle session. We compared text messages, stories, and heartaches. I realized a sizable chunk of John's text messages had been sent to both of us, and that his best jokes had actually been written by Emma. We realized we weren’t the only women caught up in his cloud of lies (and that attempting to take a proper count would give us both headaches). My breakup was only five days behind me; I hadn’t reached the sad, mad, or relieved stage yet. Sitting with Emma was the first time I allowed myself to feel anything at all.

We kept circling the biggest question of all: Why would anyone do this? Maybe that’s why it took well into our second hour before I confessed how embarrassed I was that we had been unknowingly caught in this weird love triangle.

“Marie,” she replied, matter-of-factly. “We were all someone else’s other woman.”

Pop culture wants to paint cheating with a single brush, as though every woman that gets involved with a man is living in a real-life version of Dolly Parton’s “Jolene.” Ashley Madison billboards declare, “Life is short, have an affair,” as though cheating is as easy as calling an Uber. The truth is more complicated than that. There's no way to prepare yourself for being cheated on, or for discovering that you're the "other woman."

Although I had only intended to meet Emma once, over the next year we sent each other emails and texts almost every night. At first, we untangled details of our past relationships. ("Where was he when he sent me a photo of the jacket he wanted to buy?" "Oh, with you.") Then, we moved onto bigger topics: anger, sadness, guilt. Walking away from John wasn’t just about healing from a bad breakup. Those words imply a certain level of consent. What Emma and I had experienced was an emotional mugging, where what we thought we had was ripped away, and the bad guy had already moved on.

But by allowing ourselves to be vulnerable during one of the most confusing moments of our lives, we began building an emotional vocabulary to explain exactly what had happened to us. One evening, when driving to the gym, I was struck by what nearly felt like a panic attack. I remembered the time Emma described a conversation with John in which he name-dropped me as "a cool girl he knows," but hid the fact that we were dating. I pulled over to text her. I smacked the keyboard quickly and autocorrect took over.

“I’m so sorry he used my existence to hurt you,” I wrote.

Emma responded that John's taunting never made her feel jealous, and that in retrospect, she was glad he referred to me by name. Later on, that's how she knew to contact me. Her response left me in grateful tears. John had made me embarrassed to simply exist. In that one exchange, Emma made me proud to have come out on the other side.

A few nights later, I found myself writing an email to Emma about how I broke up with him. I wrote, “I excused myself from John’s life.” I was encouraged by how empowered her friendship had made me feel, so I deleted the sentence and wrote a new, stronger version: "I excused John from my life." I had a lot of reclaiming to do. I could start now.

The unconventional start of my friendship with Emma raised a few eyebrows. My shrink warned me that all we were doing was wallowing in each other’s pain. (Yeah… but isn’t it all the same pain?) My friends alternately praised her strong feminist stance and — maybe thanks to them watching Single White Female one too many times — worried that if we spent any more time together, she’d attempt to knife me. (We did. She didn’t.) My mom was concerned that writing about any aspect of the relationship could make both me and Emma targets for future abuse. (While I disagree, it’s out of respect to her that names and many identifying details have been changed.)

Eventually, our emails slowed from nightly to monthly. Their tone changed, too, as we learned that many of our interests, beliefs, and values dovetailed neatly. Now, whenever I see a text or email from Emma, it evokes the same warm feelings as hearing from any other friend.

The #MeToo movement, founded in 2006 by activist Tarana Burke, had picked up steam in Hollywood six months after I met Emma in 2016. It was only then that remembered I had been touched several times in public without my consent. My conversations with Emma provided a similar mirror: Getting angry over what she endured was the first time I allowed myself to feel anything other than numb about what I had experienced. Hearing about her approach to self-care reminded me to care for myself, too. It takes, on average, seven attempts for a woman to leave an abusive relationship, according to Katie Ray-Jones, president of the National Domestic Violence Hotline. I honestly believe without having a friend to lean on during this process that I'd still be defending a man who was hell-bent on breaking me down.

Obviously, befriending the woman your boyfriend cheated on you with doesn’t work for everyone. (Even now when I tell this story, I get a fair share of raised eyebrows.) But for me, I liked having a cheerleader, someone to support me when I finally worked up the courage to block my ex on social media, and someone to celebrate with me when I threw away or sold mementos of the relationship. It helped to have a friend by my side when I was ready to try dating again.

My friendship with Emma also helped me reframe the "other woman" trope. If I really want to believe every woman who gets involved with a man already in a relationship is evil, I’d first have to turn those feelings on myself. Emma is not a bad person for failing to trust her gut. Neither am I.

Given the circumstances surrounding our breakup, I never spoke to John again. Instead, at the suggestion of another therapist, I wrote him a letter. I scribbled it out on a sheet of crumpled computer paper on my way to the airport for an early morning flight. Once I was past security, I locked myself in a bathroom stall, heart pounding, and furtively reread it one more time. Despite his long list of transgressions, I ended our final imaginary communication by thanking him for Emma — his accidental gift that allowed me to put together the pieces and move on. Satisfied, I tore up the letter and deposited it into an overflowing trash can. It felt fitting.

If you or a loved one needs help leaving an abusive relationship, dial The National Domestic Violence Hotline at 1−800−799−7233 or visit TheHotline.org to chat online with a trained advocate.