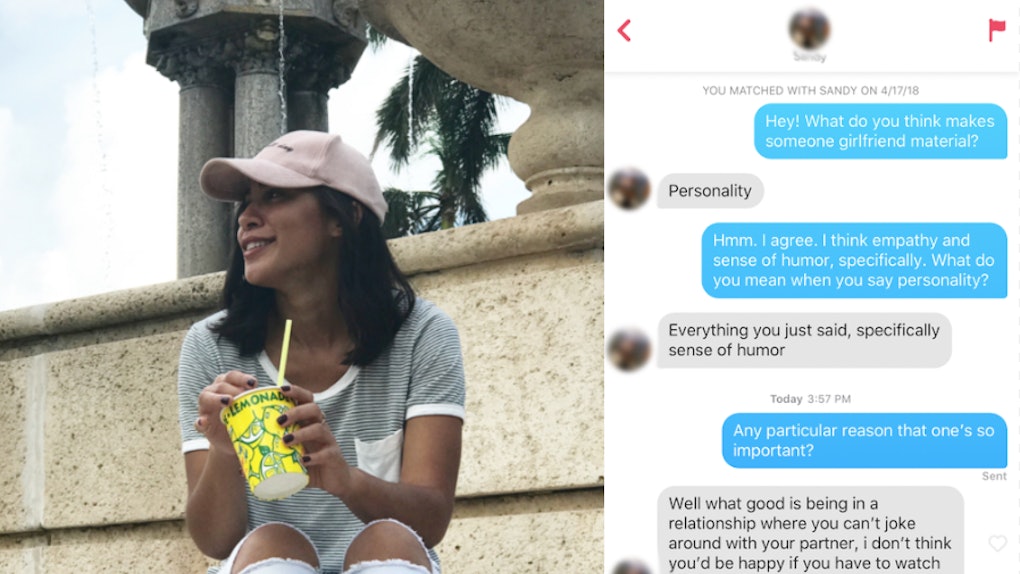 When I set out to ask guys what they look for in a serious relationship, I'll admit I didn't have high expectations. After all, I've spent a lot of time swiping left on guys who are looking for their swolemates (WTF?). Nothing against personal development or anything but, like, count me out. I prefer to do my workouts the same way I take my bathroom breaks — not in front of someone I'm attracted to. Luckily, my not being swole isn't a relationship deal breaker for most guys. In fact, I asked my Tinder matches about their ideal girlfriend and physical appearance didn't come up once.

I'm not sure if their responses would have been different if they had been talking among themselves but, for what it's worth, they were all pretty honest and heartfelt. I highly recommend initiating your own Tinder conversations with a bold and personal question like this if you're looking for something serious. Chances are, anyone who's swiping for a good time, not a long time, will reveal their intentions early on. Those who respond sincerely (and everyone I spoke to did) will be the ones who are genuinely interested in having a conversation with you.

I spoke to five guys I met on Tinder to find out exactly what qualities they're looking for in their ideal serious relationship.

I was here to ask Tyler about his relationship goals but Tyler already had some thoughts about what girls expect from him. His bio read, "Do guys actually Venmo you money?" And now I need to know the answer to this, too. Should I be asking my Tinder matches to send me gifts? Let me know, Tyler!

Anyway, I answered his question in the hopes that he would answer mine. Turns out, Venmo requests from his Tinder matches are a turnoff for Tyler because he's not really a materialistic guy. He's looking for someone who's passionate about life, even if they don't share the same interests.

What if I told you I was passionate about money, Tyler? Maybe we could revisit this Venmo thing.

I think Sandy would appreciate a good Venmo joke, since his priority in a potential partner is a sense of humor.

I was on board until he said he wouldn't be happy if he had to "watch every word" he uttered around his partner. As long as it's not offensive, you're in the clear, Sandy.

And speaking of offensive, this guy never stood a chance. Unsurprisingly, he started off with a flirtatious line about me being what he's looking for in a relationship. It was cute but it didn't advance my cause much.

I quickly realized that his guard was up because he read my bio, which says, "Mind if I ask you a question for a story?" It's not specific to this experiment but I like to leave it up as a conversation starter.

After a bit more prodding, I unleashed a lot of Chance's thoughts about women and relationships. Oh, happy day.

I mean, this guy is all over the place. He implies that guys are broken, women are annoying, and relationships are a load of crap.

Apparently, it would take him so long to find a suitable woman to be with that he'd "pretty much die before then," which I believe because who would volunteer as tribute? It's a no from me.

Doesn't matter anyway. Dating is all just a waste of time because "there's no perfect person," says Chance. I guess he's on Tim Gunn's side here — no matter who you're dating, you have to...

Terry stepped in to save the day with a bio that said he was looking for someone "willing to build and grow" with him. I'm just happy he didn't use the word "swolemate," OK.

His ideal partner is honest because he really does believe the truth will set you free. Ugh, so pure!

I swear I'm not this forward. Trevor actually described himself as a "beast between the sheets" in his bio. And yeah, I suppose that's important in a relationship, too. His real must-have, though? Someone who communicates openly and is emotionally supportive. He's not entirely opposed to financial support, either. Should I let him in on the Venmo hack?

I was surprised to find out that guys look for a lot of the same qualities women look for when it comes to serious partners and relationships. For the most part, they value honesty, integrity, and ambition.