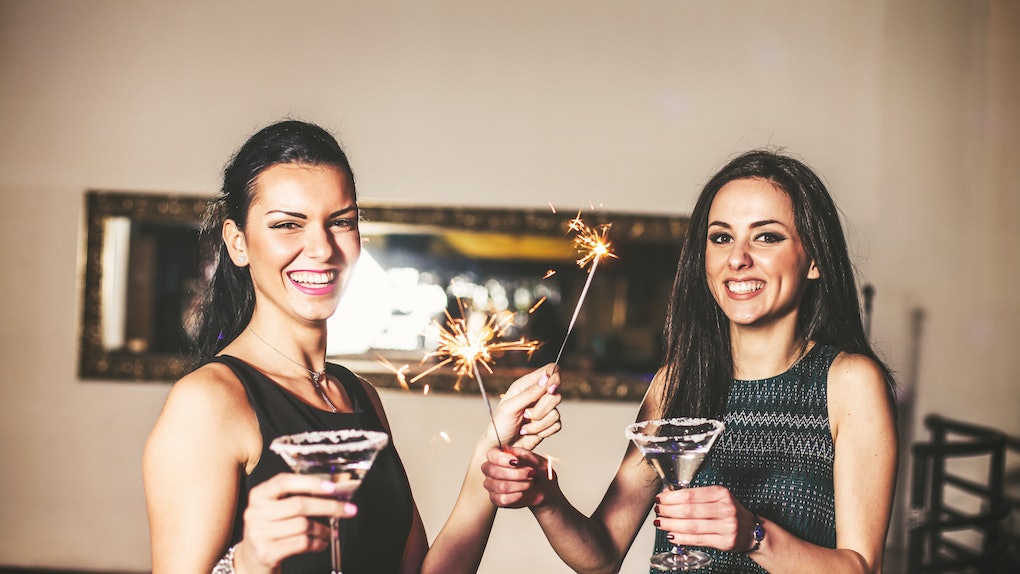 How You're Ruining New Year's Eve Before It Starts, As Told By These 7 Red Flags

No one knows the exact formula to having a super successful New Year's Eve, but you'll know when you tend to have not-so-good ones. If you find that within the past few years, you have not found fulfillment in the ball drop, it's time to look at how you're ruining New Year's Eve for yourself. Yes, it'd be so much easier to blame someone else, but ultimately, it seriously starts with you. Before you can figure out what "outside" components are ruining your fun, you have to analyze what bad vibes you're bringing to the table. Think of it as a cleansing. You can't flush something out unless you can pinpoint where the problem area is.

And many of these problems can be relinquished with a slight change of your mindset and how you view things. It's interesting how a tuneup of our outlook and perspective can drastically change the small drag we put ourselves through, holiday or not. The new year is about welcoming change and renewal. You can't do that if the hours leading up to the big hooray are borderline stressful and agonizing. Don't be that person scowling as everyone is counting down. You might not believe it at first, but there are a few things you could be doing that are ruining your NYE before it even begins.

1. Your Only Resolution Is To Forget Last Year

Yes, 2017 was a rough year. Many of us can attest to the struggle, but your resolution shouldn't simply revolve around forgetting it. Yeah, it's OK to still be sore about those 12 ungodly months of madness, but every obstacle is a life lesson. Your resolution shouldn't be about forgetting a year, but to aspire to have a better one, not matter what.

2. You're Stressing About A NYE Kiss

Who doesn't want the fireworks going off while you lay one on someone you like? Honestly, the stresses surrounding a NYE kiss have become so insane. Yeah, it's seen as good luck and all, but you can make your own luck. Just let the night unfold how its meant to.

Trust me, I get it. You don't want to wait until last minute to be scurrying around for plans. These plans from the people you don't necessarily like all of the time, are right there and it'll make you feel "secure". Well, you are what you surround yourself with and if you're fresh into the new year with people who don't rub you the right way, it's bad news.

New Year's Eve often gets us in this mindset where we compare what we did in the previous year and immediately start making a list of changes we want to make. This overwhelming, mental list-making tends to overshadow the celebration of life itself and actually making it to another year. It's OK to want to make some alterations, but you don't have to hound yourself with a checklist before the ball even drops.

5. You're Holding On To Grudges

It sucks being the bigger person, but if it's going to contribute to your well- being and fun, why not? Holding grudges takes up so much energy and they seriously weigh down on our psyches. You don't necessarily have to drop things cold turkey, but slowly forgetting about deliberately holding a grudge, will make your holiday so much better.

6. You're Stuck In The Same Routine

Oftentimes, we ruin NYE because we aren't looking forward to the same thing we do every year. It might be time to change your surroundings and get excited about a different form of celebrating than you are not used to. You'd be surprised how a little change in your environment will alter your mindset.

7. You're Misinterpreting The Holiday In General

New Year's Eve is a time to bring in a new year and seemingly start a new slate based on what you want to work on. Yes, you should be celebrating but you need to find your own meaning to welcoming a new year into your life. Don't base the holiday off of just one thing. Give it a meaning that's unbiased by what's expected, but by what you make of it.

New Year's Eve is a holiday we should all be grateful for. As we all know, time is never promised.