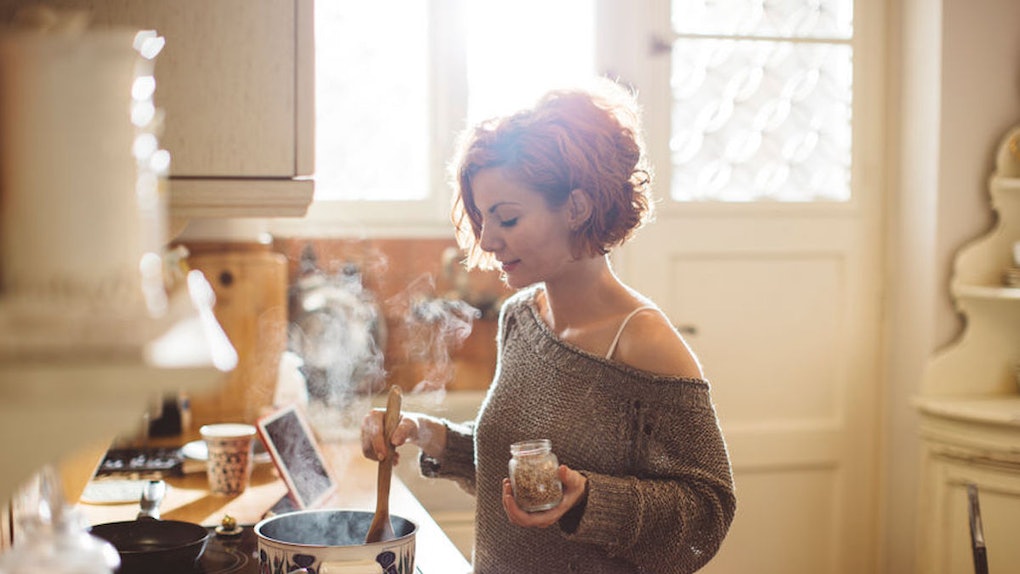 When I was a kid, my mom made me eat popcorn with nutritional yeast on top (horrible, I know). I used to think the little flakes of, well, yeast, were disgusting, not to mention totally weird. But over the years, I fell in love with not only the healthy boost of vitamin B12, but also the earthy, cheesy flavor. Understanding the fascinating science behind how your taste in food changes as you get older might just encourage you to keep trying that slimy veggie you just can't stomach, or that jar of horse radish in the fridge that makes you shiver every time you look at it. In fact, one day, you might just grow to love these foods.

Erin Wathen, a holistic health coach, food addiction counselor, and author of the book Why Can’t I Stick To My Diet?, tells Elite Daily over email that everyone is born with about 10,000 taste buds. Normally, she says, those taste buds turn over every two weeks or so, which explains why your tongue recovers pretty quickly after you burn it on a piping hot PSL. But that taste-bud-turnover, if you will, might also explain why you were more sensitive to different flavors and textures in the foods you ate when you were younger, and gradually changed you opinion about these things later on, Wathen says.

The thing is, according to Steven Parnes, an ear, nose, and throat doctor based in Albany, New York, as you age, your taste buds have a harder time regenerating. Plus, he explained in an interview with NPR, a loss in your ability to taste flavors as intensely might be due to a weakened sense of smell, which tends to happen naturally as you get older.

According to Wathen, your environment can also have a huge impact on your taste, especially when you're young. For instance, she says her children, once upon a time, always wanted to eat whatever she was eating, even if it was foods like kale and sushi. On that note, many parents, my own included, have a rule that their children have to keep trying foods that they think they don't like. And according to certified health coach Laura Ellen, this isn't just some evil parenting scheme to force children to eat broccoli. As you get older, she tells Elite Daily, continued exposure to a certain food can actually make you start to like it.

In fact, according to Ellen, one common change in taste as you age is an increased tolerance for spice levels, which may simply be due to the fact that you gradually build up the taste for spicy foods over time. "For example, young people in Central America find spicy chili peppers just as painful to eat as children in North America," she tells Elite Daily. But because, culturally, many of these families incorporate hot spices into their meals, she says the kids eventually just get used to it. "Over continued exposure, the brain begins to read the hit of spice as enjoyable rather than painful," Ellen explains. I see you, Takis.

If you've been expanding your palate lately and have started experimenting with new-to-you foods like hominy, Swiss chard, or sardines, you're in good company. "The early 20s are the time when most individuals become more adventurous with the foods they try," Ellen says, adding that this is a natural part of growing more independent and figuring out who you are as an individual.

So should you ever be concerned if your taste in food suddenly does a 180? It's probably not due to a physiological health problem, says Ellen. But a sudden, drastic shift in eating might be a sign of emotional turmoil. So just make sure to check in with yourself and your well-being if, for whatever reason, you can no longer stomach your absolute favorite cupcake flavor.

More like this
6 Mother's Day Charcuterie Boards On TikTok That Tell Mom Cheese The Best
By Kelly Pau
These Cereal-Inspired Candles On Etsy Look & Taste Like Bowls Of Your Fave Breakfast
By Rachel Chapman
The Trendiest TikTok Recipes Of All Time That You'll Want To Taste With Your Buds
By Kelly Pau, Kaitlin Cubria, Marisa Casciano and Rachel Chapman
Stay up to date