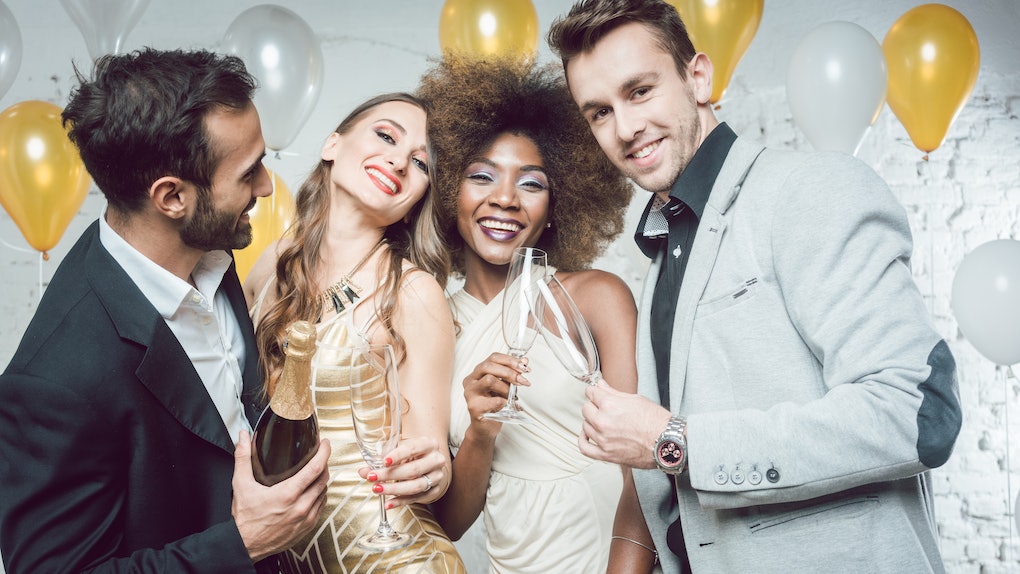 We love our friends, but when they're all coupled up during the holidays, that singleness scent of ours is potent as hell. Trust me, I've been the fifth wheel multiple times, and no one is begging for a first class ticket to Single-ville, ever. So, you have to learn how to survive New Year's Eve when single, especially if you're tagging along with a group that's consumed with that very thing you do not have — a relationship.

Hey, it happens. There's no controlling the sequence of your relationship status along with a holiday. Holidays happen no matter what. Relationships, not so much. Sure, it'd be easy to stay in and watch incredibly romantic movies during NYE, so at least your heart is in the right place when the ball drops, but where's the fun in that?

If you have amazing friends, they're not letting your single butt stay at home, no matter how much you complain. Since you've lost that battle, it's time to armor up for what the real war is going to be. Being the only single one in a group of couples during NYE is tough, but you can lessen your odds of feeling totally out of place by keeping a few key things in mind.

1. Don't Address Your Singleness If You Don't Have To

Don't blab the entire night about how you are the single one in the group. Honestly, people are so deep in festivities mode, they're hardly counting if you're the odd one out.

Don't consider it a "beat them to the punch" type of thing. You're likely the only one who's taking notice that intensely, so just soak up the moment and enjoy the time spent with your closest friends.

Going into a new year while sulking about your relationship status is no way to welcome a fresh start. You're single, OK? It's not the end of the world.

Who knows what the next year will hold. Let that ball drop, and with it, let any blues about being single crash and burn with it.

3. Match The Energy Of The Group

This applies only if your group is actually enjoying themselves. If they're not, you just have to do you, and show up and show out. Don't try to one up the good energy of the group, though.

Ladies, why do we always assume that because a woman is in a relationship, she is completely desensitized from everything else? Your ladies will never let you suffer in silence, even if they're locking hands with their beaus. Nothing comes between the magical sorcery that is girl power and companionship.

5. Don't Be Opposed To Mingling

It's easy to think that because you're the only single one in the group, that you should stick to your tribe. Of course, don't completely ditch them, but you're single, so don't be afraid to mingle and chat. Lucky for you, if the convo isn't pleasing for ya, the whole "I have to get back to my friends" excuse will have some backing.

That chic new glitter sweater from H&M? Rock it, girlfriend. It's New Year's Eve, and you can look as fabulous as you want to. There's nothing better than getting all glammed up because you can. It's empowering, and you'll feel amazing about facing the holiday.

7. Keep Your Focus On The Now And The Future

The story of how you became single or have always been single doesn't need to be voiced or replayed in your head. Be in the moment and enjoy the amazing events that are unfolding around you and your friends. A new year is quickly approaching, so let the past do what it's best at — staying behind you.

It's never easy being the only single one in a group of friends, especially around the holidays. Let the ball drop, and don't let it squash the fun there is to be had, single or not.