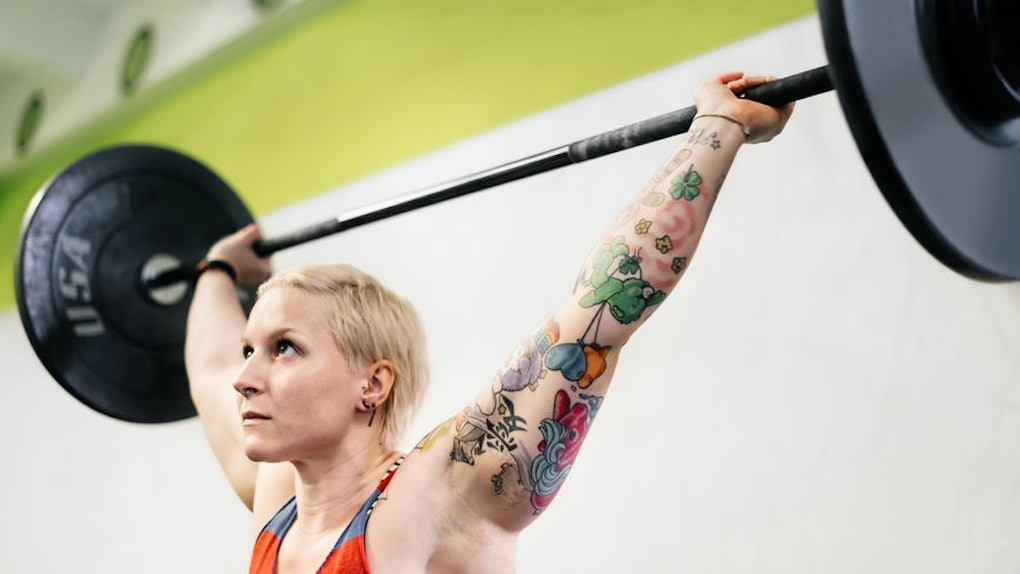 A few weeks ago, I was lucky enough to have a pro teach me how to start weightlifting — but if I'm being honest, had I not been presented with the opportunity through work, weightlifting probably isn't something I would have ever tried on my own. As a person who works out on a more casual basis, I just didn't really think I had what it took, you know? But let me tell you: Even if you think weightlifting isn't for you, or that you're "not strong enough" to do it, trust me when I say your body can really surprise you with what it's actually capable of — you just have to start from the beginning.

One training session at a time, Jesse Irizarry, founder and head coach at JDI Barbell in Long Island City, New York, squashed my preconceived notions about weightlifting and taught me the foundations of the workout in a friendly, approachable way. See, for a lot of people, weightlifting can seem really intimidating, especially at first, when you're just learning about the safest ways to move your muscles and what your body's range of motion is. As Irizarry says, "you're building awareness of how to use your body," and while it's certainly challenging to begin weightlifting, the fitness coach adds that weight-training is extremely rewarding in that it makes you more resilient, because you're really developing a heightened understanding for how to move your body and what it can do.

So, as scary as it might seem to venture over to the weight rack the next time you're at the gym, keep these basic things in mind if you're thinking about pumping some iron. Like I said, it's not nearly as hard as you're making it out to be, and TBH, there's nothing more satisfying than the progress you'll see in yourself once you start weightlifting.

Start With A Trainer

Yes, it can definitely be expensive to work with a personal trainer, but it can also be extremely helpful when you're learning the basics of something like weightlifting. According to Irizarry, working with a trainer is one of the best investments you can make when you first start lifting weights because it ensures you're using correct form and going about everything as safely as possible. Just make sure you do your research, he tells Elite Daily, so you know you're in good hands.

"Research your trainer before you come in [to the gym]," says Irizarry. "because this is not a regulated industry. There's a difference between people who can weight-lift themselves and people who can adequately, safely teach." To give you just a bit of perspective, Irizarry himself is a former D1 strength and conditioning coach, and he's competed in both powerlifting and Olympic weightlifting competitions (he's even held a world record in bench pressing).

So even if it's just for a couple of sessions to introduce you to the workout, consider splitting the cost with a friend or putting some money aside when you get your next paycheck.

Focus On The Basics

When I did my training sessions with Irizarry, he built our workouts around these four basic movements: squats, deadlifts, bench presses, and overhead presses. First I just learned the motions, without worrying about how much weight I was actually lifting; then we gradually added weight as we continued on in our sessions. Irizarry really wanted to make sure I had the form and movements down-pat so that I was safe and steady as he started to add weight to each exercise.

Honestly, the process of getting into weightlifting really is as simple as that: Start with the most basic of basics, and work your way up from there. Irizarry's advice is to make sure you have all four of those fundamental movements mastered by practicing, practicing, practicing — and yes, by adding weight gradually, too, at whatever pace and amount feels right for you (again, this is where a trainer might be especially helpful).

Don't Get Caught Up In How Much Weight You Can Lift

After you've learned some of the basic moves, you might be inclined to just go ahead and see how much weight you can fit on those barbells. But before you get to that point, fitness specialist and author of the book The 70 Second Difference, Helen Renee Wuorio, says you really want to make sure your form is strong and stable. In her experience with weightlifting, she tells Elite Daily over email, it's often better to lift at a lighter weight and move more slowly, allowing yourself to complete the exercise in proper form, before you start increasing the weight.

"You should be able to do three sets of 10 repetitions," Wuorio says. "If you cannot complete this, drop to a lower weight. If it is easy for you, increase the weight."

When you're first learning how to lift weights, strength and conditioning coach Stephanie Rose Zoccatelli recommends immersing yourself in information that comes straight from trainers and pros. "The internet is free and filled with endless resources," she tells Elite Daily over email. "Join online communities, like Girls Gone Strong; you'll get to know other women who are embarking on this new journey, share your successes, and ask questions."

Let Yourself Be A Beginner

Seriously, even if you've never stepped foot in a gym up until this point, that's totally fine. I know it's a cliché, but everyone really does have to start somewhere. And instead of worrying about where you're starting, imagine where you could go and how much you could accomplish if you really put your mind (and body) to the task.

More like this
25 Instagram Captions For Workout Pics & Being A #Boss In The Studio
By Marisa Casciano
These 40 Clever Vaccine Selfie Instagram Captions Deserve A Shot On Your Feed
By Rachel Chapman
I Tried Singing While Running Like Miley Cyrus & OMG, My Lungs
By Rachel Varina
Stay up to date