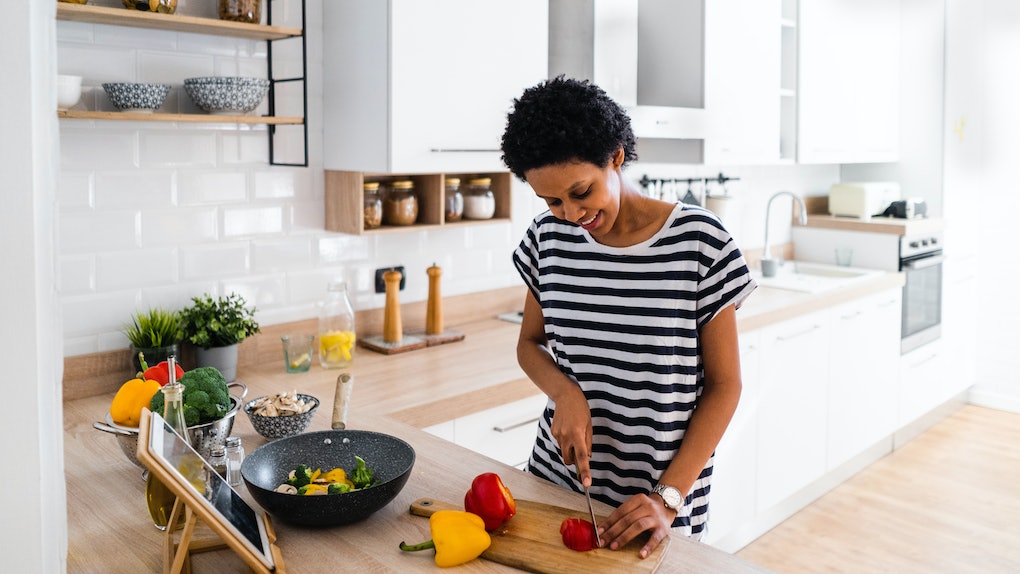 Fresh off her beloved and viral take on "nature's cereal," Lizzo is now raving about another must-try dish on TikTok. This time, the singer is making nachos out of Brussels sprouts. The totally vegan dish is something you'll definitely want to try making for yourself. All you need to do is follow her TikTok to know how to make Lizzo's Brussels sprout nachos.

The green veggie is no stranger to TikTok food trends. Recently, people shared their smashed Brussels sprouts recipes on the social media platform. By smashing your boiled sprouts and cooking them in the oven or air fryer, you get a delicious and crispy treat. Brussels sprout nachos, on the other hand, don't require any smashing. Instead, the Brussels sprouts are cooked and used in place of regular tortilla chips.

It's not just the Brussels sprout chips that are different either. The Grammy-winning singer has been very open about her vegan lifestyle on TikTok. She's even shared a few vlogs of what she all the vegan meals she eats in a day. This particular Brussels sprouts recipe is totally vegan as well, with walnut "beef" and a non-dairy queso. But if you prefer some beef or cheese made with dairy, you can definitely put your own spin on it.

If you are following Lizzo's recipe exactly, you'll want to start with the "meat." Combine some walnuts, bell peppers, onions, liquid smoke, cumin, and seasonings into a blender. As that's blending together, it's time to work on your Brussels sprouts. Cut your veggies in half and cover with some salt, pepper, and oil. If you've got an air fryer, throw your sprouts in and cook for about 10 minutes at 300 degrees. You can also follow a simple smashed Brussels sprouts recipe that uses just the oven if you don't have an air fryer.

Next comes the salsa and queso. For the salsa, blend up some cherry tomatoes until it has a puree-like texture. You can also add some other ingredients for flavor like onions, garlic, and cilantro into the blender. Once that looks like homemade salsa, work on your queso. In her TikTok, Lizzo admits that she didn't have time to make her own homemade queso, so instead, she heats up some Mother Raw Spicy Vegan Queso ($7) in a skillet. If you do have the time, you can always follow another TikTok recipe, like this coconut queso or this cashew queso.

Before assembling, brown your "meat" a bit in a skillet. Then, spread it onto your Brussels sprouts and top it off with the queso and salsa. Lizzo's TikTok ends before she can give her full review, but her caption says it was "delicious."

Other TikTokers like Tess Candell (@fit_tess) tried Lizzo's recipe for themselves. Tess didn't have the queso, so instead, the TikToker made some homemade guacamole. TikToker @nola.vegan also made their own version of vegan balsamic Brussels sprout nachos. Instead of "meat," they used shredded Brussels sprouts on top of some tortilla chips. This goes to show that you can really experiment with your nachos to get the perfect dish for you — as long as there are Brussels sprouts in it.

Serve up some nachos at your next at-home movie date with bae or taco night with the roomies. Just don't forget to document your cooking process on TikTok, so you can inspire other users to try this bussin' dish.