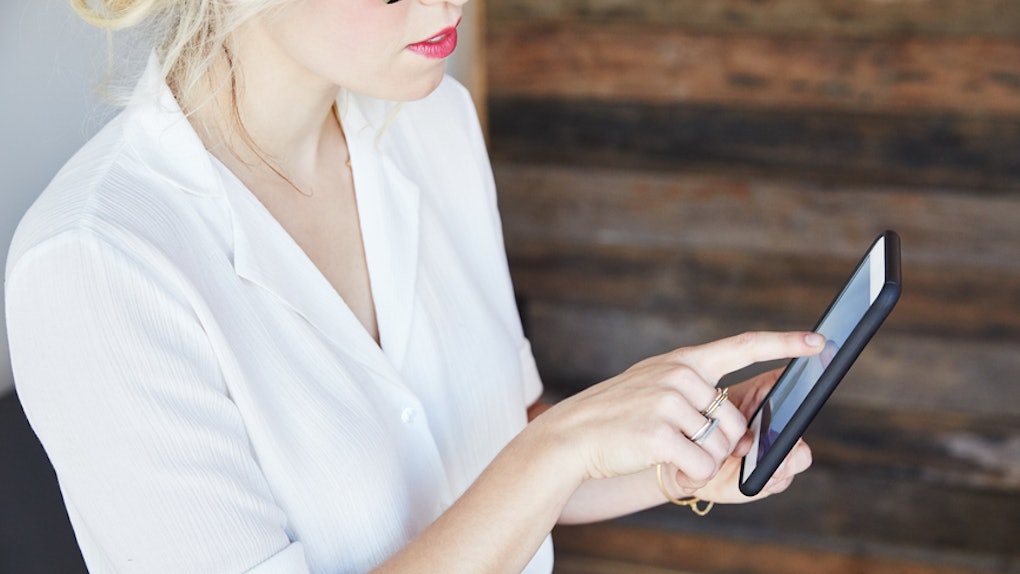 How To Get Apple's "i" Keyboard Fix With New Update, Because We Finally Have Answers

Rejoice! Apple has released another new update to fix that unfortunate keyboard glitch caused by iOS 11.1. You know, the one that turned a lowercase "i" into a capital "A" with a boxed-in question mark next to it. It's called iOS 11.1.1, and we're all #blessed because it's available right this second. Without further ado, here's how to get Apple's "i" keyboard fix with the new update!

Just like you did when you upgraded to iOS 11.1 in the first place, go to "Settings" and tap "General" to see a menu item labeled "Software Update." It'll likely have a red dot next to it, indicating that an update is available. Select it and tap "Download and Install" to initiate the update's installation process. Once it's finished, you should be able to type the letter "i" without it autocorrecting to a weird code-like line. According to AOL, iOS 11.1.1 is around 50 MB, so if you're forever running low on storage, proceed with caution. (You may have to delete a few things in order to get the fix, sadly.)

Thank goodness Apple came through with the update when they did, because there were rumors the tech company could potentially wait until iOS 11.2 to fix the annoying autocorrect error. That wouldn't have been so bad, though, considering savvy iPhone users found a couple ways around the issue. For one, many people created a keyboard shortcut in "Settings" by making a capital "i" ("I") a shortcut for "i." This way "i" would autocorrect to "I" instead of the weird-looking code.

Another option lots of people used was downloading a new, third party keyboard. Each was a temporary fix while we waited for Apple to release the official update its operating system.

People were, naturally, feeling inconvenienced by the iOS 11.1 keyboard glitch.

"Talking about myself is my favorite thing."

Me thinks this was an unforeseen issue.

Thankfully, only a little more than a week passed following iOS 11.1's debut on Wednesday, Nov. 1, before Apple came to the rescue with iOS 11.1.1. The update also fixed a bug that caused the "Hey Siri" functionality to stop working, AOL reports. Not bad, right?

"Me; after updating my iPhone and getting a patch for the keyboard glitch."

That's all, everyone. We can go back to talking about ourselves without any autocorrect issues.

What Else Is New?

Besides the whole "i" snafu, iOS 11 came with lots of cool new features including a roster of more than 70 new emojis. From mythical creatures to mermaids and seriously so many food options, emoji conversations can be so much more robust now — hey, maybe we didn't need to fix the "i" thing, anyway. I'd gladly supplement the mermaid emoji instead, TBH.

With iOS 11, you can also block ads, customize your control center, and use Siri as your personal translator by giving the command, "Siri, how do you say...." Given the newest bug-fixing update, you should be good to go as far as being able to seamlessly enjoy the newness without any autocorrect problems. Who knew typing the letter "i" is so crucial to daily life?

Cheers to a weekend of uninterrupted texting, tweeting, and typing on your iPhone, everyone! I, for one, won't miss seeing the "A" with a boxed-in question mark around it. (Though I did LOL at all the hilarious memes the internet gave us re: Apple's glitch.)