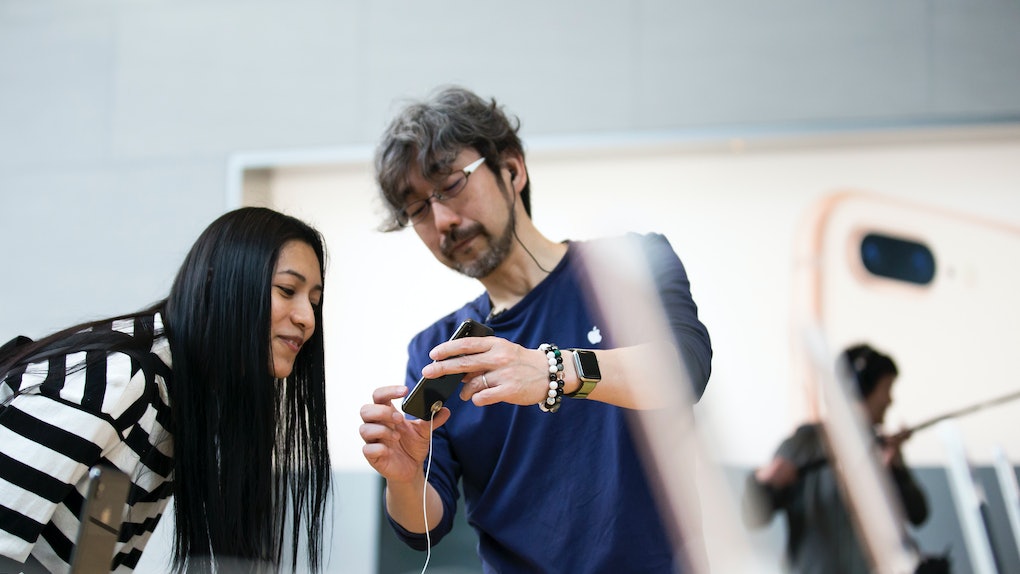 Apple users, if you updated your device to iOS 11.1 on Wednesday, Nov. 1, you've probably noticed the major glitch plaguing your keyboard — the one that's autocorrecting "i" to an "A" with a boxed-in question mark next to it. Eek! So annoying, right? Though there is a temporary fix while Apple works on remedying the bug, that hasn't stopped the internet from taking the pesky typing inconvenience and turning it into viral gold. Keep reading to LOL at tweets and memes about Apple's "i" keyboard glitch that are so damn relatable.

First thing's first, let's talk about how to fix the problem before we start making fun of it. (The new emojis were so exciting, but this issue — emphasis on the "i" — must be stopped.) Instead of completely avoiding the letter "i" until Apple releases another update, you have a couple options. One, per Lifehacker, is to create a keyboard shortcut in "Settings." To give "i" a new shortcut, go to "General," then tap "Keyboard" and "Text Replacement." Select the plus sign to add a shortcut. Type a lowercase "i" in the "Phrase" section and an uppercase "i" ("I") in the shortcut section. Hit save, and that's it. Any "i" you type will now autocorrect to an uppercase "i."

Another option is to download a third-party keyboard in the meantime. Honestly, neither solution is perfect. However, they're only temporary since Apple is reportedly working on an official update. (Finger's crossed this happens sooner rather than later!) Not being able to type "i" in peace has stirred up some controversy, the internet has morphed the bug into a wonderland of hilarious tweets and memes. Turns out, we all love typing in the first person and are lost without our lowercase "i."

"Until Apple fixes this phone issue Me guess Me will talk like this."

Me thinks this is for the best.

In all seriousness, the alphabet is suffering.

Look, "h" and "j" are surrounded by a capital "A" and a question mark inside a box. It just doesn't feel right and totally throws off the song I still shamelessly sing in my head for reference. Capital-a-question-mark-inside-a-box just doesn't have the same ring to it, TBH.

With the current keyboard situation, the iPhone logo should really look like:

Looks way less sleek, if you ask me.

Maybe it's a good thing we can't type the letter, after all?

But actually, it's pretty upsetting on a George Constanza level.

It's not an easy time for Apple customers who updated to iOS 11.1. Older phone models tend to get a little buggy on new updates, and that's exactly what's happening, unfortunately. Apple's fix will likely come later this November with the release of iOS 11.2, meaning everyone will need to sit tight with the temporary fixes until then. Sigh. Here's to hoping everything will be back to normal soon. What is life if you can't text or tweet other people about yourself without a capital "A" and a boxed-in question mark popping up? I'll tell you: It's frustrating!

But hey, at least iOS 11.1 brought us more than 70 new emojis to play with. Maybe instead of "i", we can all reference ourself as emojis. For instance, I'd totally text people the new mermaid emoji in lieu of "i." Considering it's possible to have entire text conversations in emoji, I'd say we can add it to our list of (permanent?) fixes to Apple's unfortunate glitch.