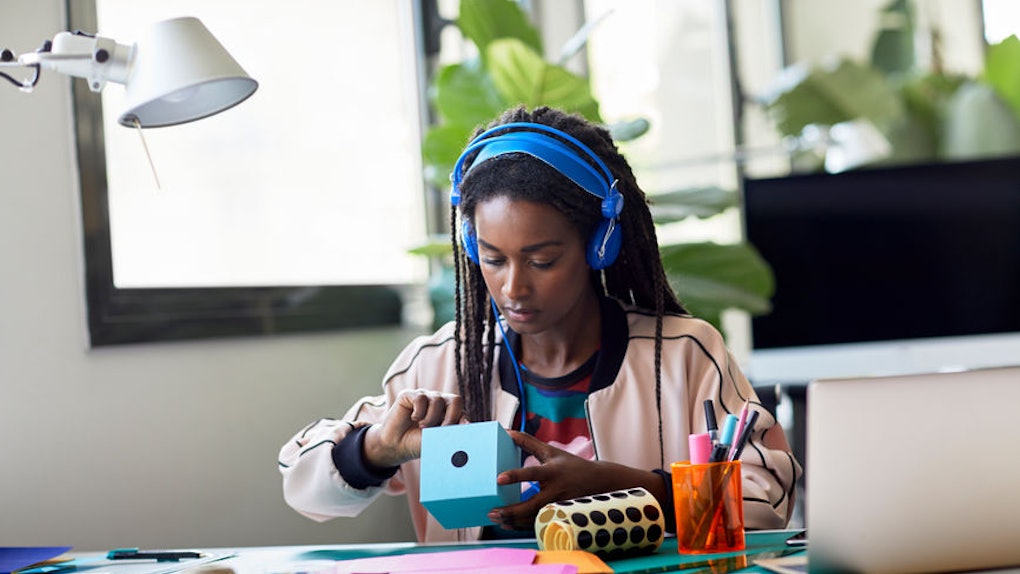 How To Focus In An Open Plan Office If You're Easily Distracted, According To An Expert

Let's be real: Working in an open-plan office has its ups and downs. For one thing, it can be remarkably distracting when you're trying to work, but on the other hand, having a bunch of teeny-weeny cubicles in your workspace can be legit depressing. Still, those walls also mean you aren't constantly chatting with Brenda from accounting, you know? The thing is, research has shown that these workspaces have more positives than negatives to them (more on that in a bit), so if you're easily distracted by the setup, it's worth learning how to focus in an open-plan office, especially since this layout is pretty much the norm in most workplaces these days.

In terms of the positives, a new study, which has been published in the medical journal Occupational & Environmental Medicine, showed that working in an open-plan office might be the healthiest way to conduct business overall. According to ScienceDaily, researchers gathered over 200 volunteers from four different U.S. government office sites, all of whom were working in three different types of workspaces: an open plan with no or low partitions, cubicles with high walls, and private offices. For three days and two nights, the volunteers wore activity and heart monitors so that researchers could keep track of the type and intensity of their movements. The workers also answered questions on their smartphones each hour about their moods, and then, at the end of the three days, they completed a survey about their stress levels.

The data revealed that workers in open-plan offices engaged in more physical activity than both the workers in cubicles (20 percent more activity) and those in private offices (32 percent more activity), not to mention they experienced less stress overall. What's more, the study found that the more physically active someone was throughout their work day, the lower their reported levels of stress were.

So, while this is all well and good, it doesn't quite solve that whole distraction problem. In fact, research has shown that open-plan offices aren't that great for productivity: A study published in the Journal of Environmental Psychology analyzed the workplace habits and satisfaction of some 40,000 office workers in 300 different offices, and found that part of the reason why these open offices are so distracting is that people don't actually like being forced into such close proximity with others. TBH, I can totally relate.

If you can, too, rest assured that it's not impossible to maintain focus in an open-plan office. According to counselor and relationship expert David Bennett, the first step is to drown out the noise that's disrupting your productivity. "If you’re allowed, put in headphones," Bennett tells Elite Daily over email. "Normally I don’t like the idea of escaping the world via headphones, but if you have to concentrate and focus and tune out the people around you, then pop in some headphones, even if it’s just some brown noise."

Bennett also suggests taking regular breaks outside of the workspace. "Research shows that taking breaks can improve productivity, so even if you're just taking a walk outside to sit for a few minutes each hour, it can give your body and mind a much-needed break from the open office," he explains.

Last but certainly not least, Bennett says to make sure you discuss boundaries with your co-workers, meaning things like how they should get your attention, how much small talk is too much, what constitutes interrupting you, and what to do if you absolutely need privacy to work. Can that be awkward? Sure. But ultimately, being real with people about what you need is always the best way to go.

"These are all things that vary depending on the person," Bennett says. "Discussing your expectations and that of your co-workers can help minimize stress for everyone."

More like this
May 11, 2021 Will Be The Best Day This Month For Leo, Especially In Your Career
By Chelsea Jackson
10 Unique Graduation Gifts On Etsy Grads Can Use To Relax After All Their Hard Work
By Rachel Chapman
HomeGoods' Hideout Contest Treats You To A Relaxing Solo Getaway & Free Merch
By Marisa Casciano
Stay up to date