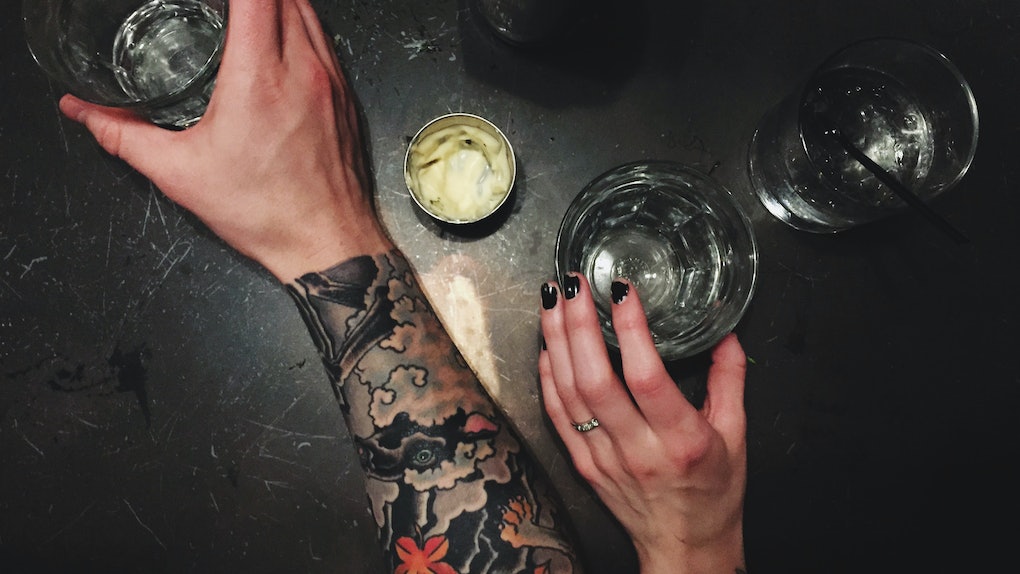 I am a people-pleaser, and boy, is it gross. I want everybody to like me, even if I don't particularly like the collective "everybody." In fact, I don't particularly like a lot of people, including slow walkers, internet trolls, and men who meet me for a first date and explain why I shouldn't apply to grad school. Still, I want all of these people to like me. Effed up, no? I have never been able to end a bad date early for fear of seeming "b*tchy," and I'm not proud of it.

On my date with said mansplain-y banker — who apparently also served as an unofficial grad school consultant for his Bumble dates — I didn't bail after the first drink. Nope. Instead, I ordered a second glass of Lambrusco. Masochistic, right? By then, he had shamed my taste in music, whipped out both of his Samsung Galaxies to reply to emails, and told me he didn't "understand" downtown Manhattan.

Why would I stick around with such a buzzkill of a human rather than just saying bye?! First, I think I needed that second glass of wine after indulging his 20-minute lecture on The Beatles. Second, I honestly had no idea how to peace out of the situation. I spoke to dating expert Meredith Golden of SpoonmeetSpoon for some advice about how to end my next bad date before I make the insane decision to indulge in a second drink.

OK, so this one is obvious. This piece of advice is to me, from me, but it's a good rule of thumb. While I don't think you should write anyone off 30 seconds into a date, sometimes you just know... like when you find yourself opposite a Scott Disick-adjacent bro. When you say "no thank you" to another round, your date will (should) follow your lead.

"I advise someone to try and stick it out for 30 minutes if it isn’t a match, but person is well-mannered," says Golden. "I believe in kindness, good manners and karma. The assumption is we are all adults and can sit through one drink together and find something to talk about."

Are you on a seemingly unending dinner date? Golden recommends discreetly asking your server to bring your check. Servers see it all the time, and your date will get the hint as soon as the bill arrives.

2. Make Up An Excuse

Every movie and TV show from the early aughts taught us to have a friend on call who can ring us up and say, "Something bad happened." (In particular, I'm thinking of the time Charlotte asks Carrie to do this on my favorite dated show about dating, Sex and the City.) However, I would say that this might not actually be your best bet to ending a date in 2017.

First, because cellphones are used for a lot more than just emergencies now, so having your phone on loud or on the table would be super weird (and rude) of you. Second, you might want to ask yourself how good your acting skills are on a scale of one to Meryl Streep, because making up an extreme excuse requires follow-through.

"For these situations, after elapsed time, say, 'I have an early meeting in the morning that I must prepare for, but it was really nice meeting you,' and exit gracefully," says Golden. You don't want to hurt their feelings, but you don't need to stick around either.

If you're really in a pickle, Golden told me that that there are apps that allow you to fake an incoming call. Another pro tip she shared with me: always have cash on hand, so that you can get out of a date without worrying about waiting for the check, or Venmo-ing your date. Very smart.

Here's a novel thought: rather than make up an excuse, just tell the person you are across from that it was nice to meet them, but you're ready to head home for the night. Keep it simple and truthful; it's actually easier than making up a lie.

"Typically adults are well mannered enough that none of [these excuses] should be needed," says Golden. She adds that if you are in danger, of course you should make up an excuse to leave, but otherwise, why not default to your manners and wrap up after one drink?

Caveat: don't overzealously go in for a goodnight kiss and text them, "I had such a great time meeting you," if you really didn't. That happened to me once and it was very confusing. Honesty is the best damn policy there is.

4. Go To The Bathroom And Never Come Back

This is only for those of you who find yourselves in truly dangerous situations. Again, leaving cash would be preferable, but if you are fully terrified by your date, get out as soon as possible.

After speaking with Golden, I feel a little less shameful about not ducking out of my aforementioned terrible date. True, I shouldn't have ordered my second drink, but I am a lady and I wanted another glass of wine, so I did. Manners are important to me, and I wasn't in any serious danger.

Eventually, my bad date finished his drink and continued to fiddle with his phone, so I told him he could leave because it seemed like he had a busy morning coming up. I offered to pick up the check. I felt like this was a solid move. (Plus, I'm in the middle of going on 51 dates for a podcast.) All I wanted was to finish my bev in peace, but he insisted on paying... and staying. It was one night of my life, and it really wasn't all that bad as far as first dates go.

Overall, I would say this: if you are on a bad date, treat it like traffic and stop, look, and listen.

Stop: Figure out if you are in any immediate danger.

Look: Take a look at what's bothering you about your date. Are you just not that into them? OK, finish your drink and then head home.

Listen: Pay attention to your gut. Will you feel terrible if you make up an excuse to bail and watch the newWill & Grace? Stick it out for 30 more minutes. Or are you just sticking around to seem "nice"? Say goodnight politely. You do you.