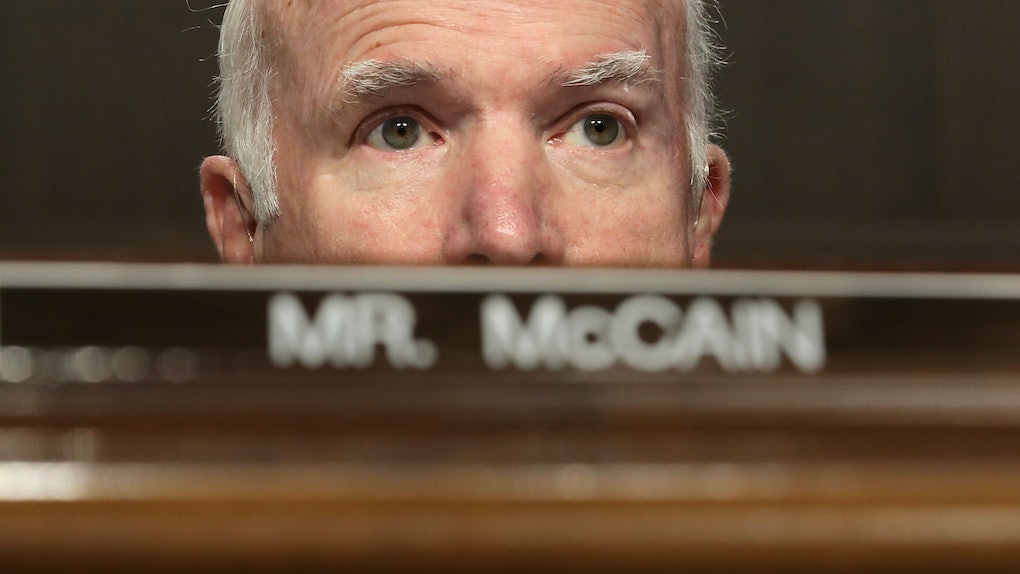 How To Call Congress About Tax Reform, If You’re Getting Worried

When news broke on Nov. 30 that Arizona Senator John McCain will support the Senate's tax reform bill, many saw it as one step closer to the huge overhaul of the American tax code. But with details about how the bill could hurt the middle class coming out the same day, some people are getting alarmed. So you may be wondering: how can I contact Congress about tax reform? Can I even make a difference, or is it too late? Well, we're here to help.

UPDATE: The tax bill passed in the Senate late on Friday, Dec. 1. However, that does not mean that it automatically becomes law. Your voice can still have an impact.

EARLIER: If enacted, the Republicans' tax reform plan would mean $1.5 trillion in tax cuts for both individuals and businesses, per the New York Times. But there's a catch: overwhelming evidence points to those tax cuts going to the extremely wealthy. In fact, only hours after McCain announced his support for the bill, the Joint Committee on Taxation (JCT), a bicameral Congressional body, released its study of the Senate tax bill, and it turns out that the bill would, per The New York Times, add $1 trillion to the deficit, even after accounting for its predicted economic benefits. And as the Center on Budget and Policy Priorities points out, the burden will fall heavily to low- and middle-income earners.

But even with McCain's yes, the passage of Senate tax reform balances on the edge of a knife: with 52 Republican senators, the GOP can only afford two "no" votes. With McCain officially a yes and Alaska Senator Lisa Murkowski "likely" a yes, there are, according to CNBC, six undecided Republican senators: Tennessee's Bob Corker, Oklahoma's James Lankford, Arizona's Jeff Flake, Maine's Susan Collins, Wisconsin's Ron Johnson, and Montana's Steve Daines.

That means there are six senators who are waiting to hear from their constituents about their thoughts on tax reform.

So, here's how to fill them in.

The House of Representatives already passed their version of tax reform, so it's time to focus on your senators.

First and foremost: figure out who your senators are. There's a searchable list of senators on Senate.gov, or, heck, if you want to know all of your representatives, check out Who Is My Representative?

When you know who you need to call, you can use the Senate switchboard to be connected with someone who will connect you with the senator you request. That number is (202) 224-3121. But senators also list their numbers directly on their websites — for all of their offices. senators have D.C. offices and at least one office in their home state, as well. So just google, "[your senator's name] contact."

Let's use North Carolina Senator Richard Burr as an example. You could call the switchboard at 202-224-3121 and ask to be connected to Burr, or you could visit his website's contact page, which lists all office locations and phone numbers.

A former congressional staffer wrote for Lifehacker that emailing is not as effective as calling. So pick up your phone.

You can pre-record a message with the app Stance, which will send messages to your representatives, and, if those reps' voicemail boxes are full, will continue to call until they're available.

Or, hey, you can wait until 5 p.m. ET and leave a voicemail at their D.C. office. Just check out the listed hours on your senator's website (which you can find by googling their name and contact info.)

Oh, god, someone picked up. What do I say?

There are a few key points you need to hit: your name, where you live, the fact that you are a constituent, and why you're calling.

Let's use Burr again as an example. You'd say, "Hi, my name is Lisa Dunn, and I live in Blahblah, North Carolina. I'm a constituent of Senator Burr, and I'm calling because I'd like him to know that I am staunchly opposed to the Senate's tax reform proposal." (Of course, use your own name, but you get the picture.)

Sometimes they won't ask for a reason why, but sometimes they do. It depends on how busy they are. So if they do ask (or if you're leaving a voicemail)...

Know what you're talking about.

This one is important. Your call will be more impactful if you can cite specific data.

For tax reform, you can use our articles on what is in the GOP tax plan and how the tax plan would affect your tax returns as resources.

But here are some key points: the tax plan as it stands will actually raise taxes on the lowest earners, and it will most heavily benefit top earners, both by dollar and by percentage. Individual deductions would be eliminated, which would have devastating effects on teachers, who would no longer be able to deduct school supplies, and graduate students who rely on tuition waivers to pay for school.

Tax cuts for low- and middle-income earners could be as low as $100, per Nov. 30's Joint Committee on Taxation study, and by 2027, "84.1% of Americans would see no change or an increase of at least $100 in their taxes compared with under current law."

Plus, the Senate bill proposes a repeal of the Affordable Care Act (ACA, aka Obamacare)'s individual mandate. Per Reuters, that would lead to higher insurance premiums and would threaten health insurance for millions of Americans.

In other words: this tax plan will ultimately hurt the middle class.

Call more than once.

Make noise. Call more than once. Don't spam your senator, but take the opportunity to call every time news breaks, such as Nov. 30's news that the plan would add $1 trillion to the national deficit.

Most importantly: don't give up.

Several Republican senators have expressed doubt, including Maine's Sen. Collins, who is unsure about the individual mandate repeal. Several senators who have expressed uncertainty recently voted on a motion to proceed, which signals that they're leaning toward a yes vote. But even Florida's Marco Rubio and Arizona's Jeff Flake are unsure about how they're going to vote, so despite how you may feel, all hope is not lost.

As California Senator Kamala Harris pointed out, it was constituent calls that prevented the repeal of the Affordable Care Act this summer.