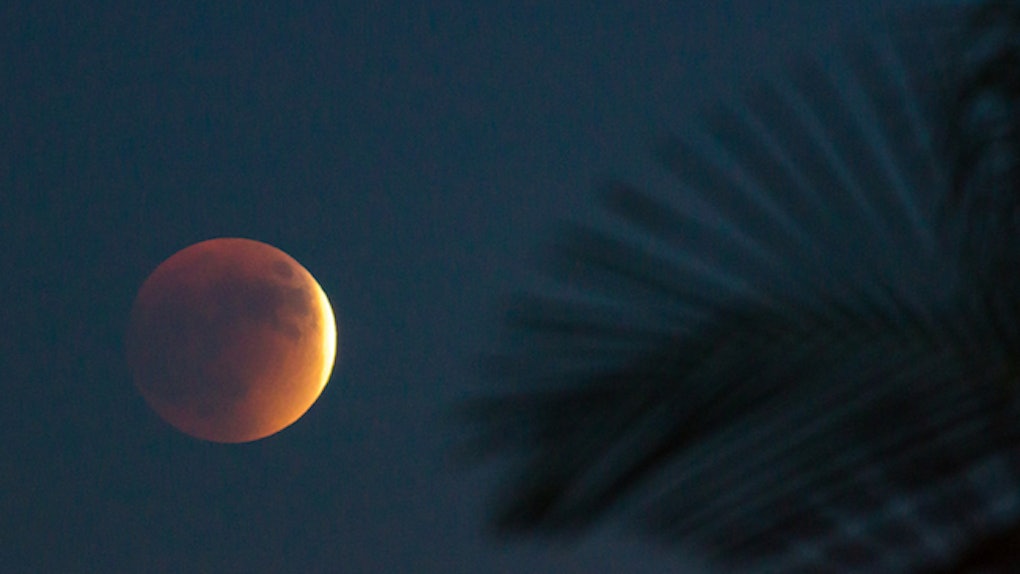 Winter can be such a dreary season, mainly due to the fact that the sun sets so ridiculously early each day, and by the time you get out of work, it feels more like midnight than 6 p.m. Luckily, though, on Jan. 31, the moon is going to be making up for the sun's rude absence by putting on one hell of a show. The upcoming lunar eclipse will surely be a stunning sight to see, but if you're wondering how the super blue blood moon affects your mood, you're definitely not alone. This won't be just any old lunar eclipse, my friends.

If you're blankly staring at your computer screen right now, wondering what the hell a "super blue blood moon" is, it's really not as complicated as it sounds, I promise. When you break down the fancy name, a "blue moon" just means that it's the second full moon of the month, a "supermoon" means that the moon will be as close as it can possibly be to planet Earth, and the "blood" part simply refers to the reddish hue that you'll see on the moon if you're watching the lunar eclipse.

Anyway, now that that's out of the way, let's get into how this unique lunar eclipse is going to make you feel.

First of all, research suggests that the lunar cycle can have a huge effect on how much sleep you get at night. More specifically, full moons have been linked to less time spent in a deep slumber. Bottom line: The full moon might make it really hard to fall asleep on the evening of Jan. 31.

I don't know about you, but when I'm robbed of even the slightest amount of shut-eye, I am not a happy camper. Unfortunately, the super blue blood moon could be the culprit behind your disrupted sleep patterns, and it could cause you to become a cranky, fatigued version of yourself that spends all day dreaming about an IV of coffee being inserted into your arm (or is that just me?).

However, if your sleep schedule seems to be as normal as ever, but you're still feeling totally out of whack in the wake of this lunar phenomenon, fluctuating hormones could be to blame. According to Migraine.com, many women's periods sync up with the full moon and its significant gravitational pull. So, think about it: The blue moon means it will be the second full moon of the month, and as a result, it may lead to double the amount of hormonal shifts. Well, isn't that just lovely? Honestly, one week of PMS is more than enough, but two? Nobody needs that sh*t.

While the super blue blood moon sort of sounds like a bummer, there are a few ways to stay composed and maintain your sanity through it all.

If you start to feel like your emotions are all over the place on Jan. 31, you might want to chill for a sec and try to take advantage of the fact that the supermoon might just be seriously boosting your sex drive.

While there's no exact scientific proof on the upcoming lunar eclipse's effects on your libido, some speculate that all the cosmic energy will amp up your sex drive and make it a prime time to get down and dirty. I mean, even if that's not necessarily true, sometimes that's all you really need for a quality mood boost, amirite?

FYI: If you do take advantage of your potentially lustful libido during the super blue blood moon, be sure to use protection if you're not trying to have a baby. Past research shows that there's a baby boom specifically when the moon is closer to the Earth — just sayin'. Protection is always a good idea, but it may be especially important at the end of the month, so stay safe out there, fam.

Not buying into the whole lunar sex thing? Don't worry, there are plenty of other ways to chill out in the midst of the super blue blood moon: Calming yoga flows, guided meditations, and soothing bubble baths are just a few ways you can keep cool and enjoy the evening.

Ultimately, how you'll conquer those mood swings is totally up to you. If nothing's helping you, though, maybe just take a moment to simply look out your window, take in the view of the super blue blood moon, and appreciate the fact that this phenomenon hasn't happened in over a century — and yet you're alive and here to witness it with your very own eyes. For all you know, the sight might just take your breath away.

More like this
These 40 Clever Vaccine Selfie Instagram Captions Deserve A Shot On Your Feed
By Rachel Chapman
The Netflix Reality Show You Should Watch, Based On Your Zodiac Sign
By Chelsea Jackson
Your Mars Sign Meaning Reveals A Lot About Your Sexual Needs, So Take Notes
By Roya Backlund
Stay up to date