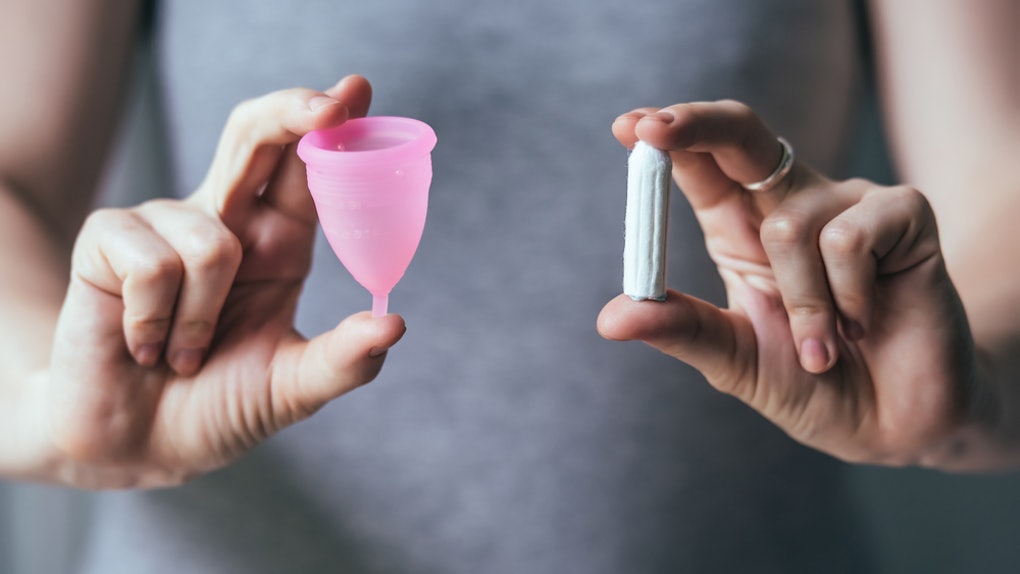 How Period Cups Work, Because TBH, They're Not Exactly Self-Explanatory

So you're sick of tampons, but you feel like there's no other option. Pads feel a little bit middle school, and, uh, those are the only two menstrual hygiene options, right? Wrong. Once you know how period cups work, you might just reconsider the notion of ever using a box of tampons again.

Menstrual or period cups (which are often referred to as "diva cups," because one of the most popular brands is the DivaCup) are flexible cups that you insert far inside your vagina to hold any blood from your menstruation. It's pretty apparent why they tend to get a bad rap: Having to pour out a cup of your own blood is definitely, to say the least, an acquired skill.

The menstrual cup movement has been gaining steam largely due to its feminist and environmental implications: A menstrual cup, in essence, tends to demand the destigmatization of periods, and it's also a far more environmentally friendly option than a tampon or pad, which are both, of course, thrown away after you're done with them.

1. First Of All, What Exactly Is A Period Cup?

A period cup is a menstrual tool that works to accomplish the same goal of a tampon or a pad: It keeps menstrual blood from leaking out of your vagina and staining your clothing.

Simply put, you insert the cup, and it fills up with blood. After several hours, you take the cup out, pour the blood out, then wash the cup for reuse. Easy and breezy, right?

2. How Does A Period Cup Work?

It's not as complicated as you think, although the idea of it might take some getting used to. You fold the cup in half and insert it into your vagina until it's far up toward the cervix. Then you twist or pull a little bit, so that the cup pops back into a circular shape.

Once the menstrual cup is inserted, it can stay up there for up to 12 hours. This is awesome for anyone with a heavy flow, since tampons need to be switched every seven to eight hours. If you're a little uneasy inserting it in the bathroom, some people feel more comfortable doing so while taking a warm shower.

3. Why Should You Use A Menstrual Cup Over A Tampon?

First and foremost, using a period cup is the most environmentally conscious option for menstruation. Tampons are used by over 100 million women worldwide, and most of them are not recyclable, which means that the average woman is causing 300 pounds of tampon- and pad-related plastic to go to a landfill over the course of her lifetime. A period cup, on the other hand, is reusable for several years at a time.

Now, all that tampon- and pad-related waste isn't something to freak out over. In truth, those 300 pounds account for a pretty tiny amount compared to the other major types of waste we all cause as humans, so it's not like menstruation is a central cause for global warming, or anything like that. But if we all made the concerted effort to switch to period cups, that would have an exponential impact on how much menstrual waste we produce every year.

4. How Much Do Period Cups Cost, And Where Can I Get Them?

A menstrual cup typically costs somewhere between $15 and $25, and you can reuse that one cup for years at a time. You can find one at all the same places you get your tampons from — your local pharmacy, the feminine hygiene aisle in the grocery store, etc.

5. Are There Any Risks To Using A Period Cup?

Nope! In fact, using a period cup virtually eliminates any risk of toxic shock syndrome, a viral infection that can develop when a tampon is left inside your vagina for over eight hours.

One of the greatest advantages to using a menstrual cup is that you can take care of your period for 12 hours at a time, and feel totally worry-free in the process.

6. How Long Can You Keep A Period Cup In For?

You can keep a period cup in for up to 12 hours, although it totally depends on how heavy your flow is.

A menstrual cup such as the DivaCup can hold up to an ounce of blood: In menstrual speak, that's as much as two high-absorbency tampons. Another way of viewing it is this stat from DivaCup: Most women don't even fill the cup halfway after 12 hours.

Not at all. Since the cup collects your blood rather than absorbing it, it's actually less messy than a tampon, plus it's odor-free (tampons can smell because the blood becomes more exposed to air) and far more contained overall.

All you have to do is pull the stems at the bottom of the cup until you can reach the sides, and gently take it out. If you're a little nervous about it, you can practice doing it in the shower until you're more comfortable.