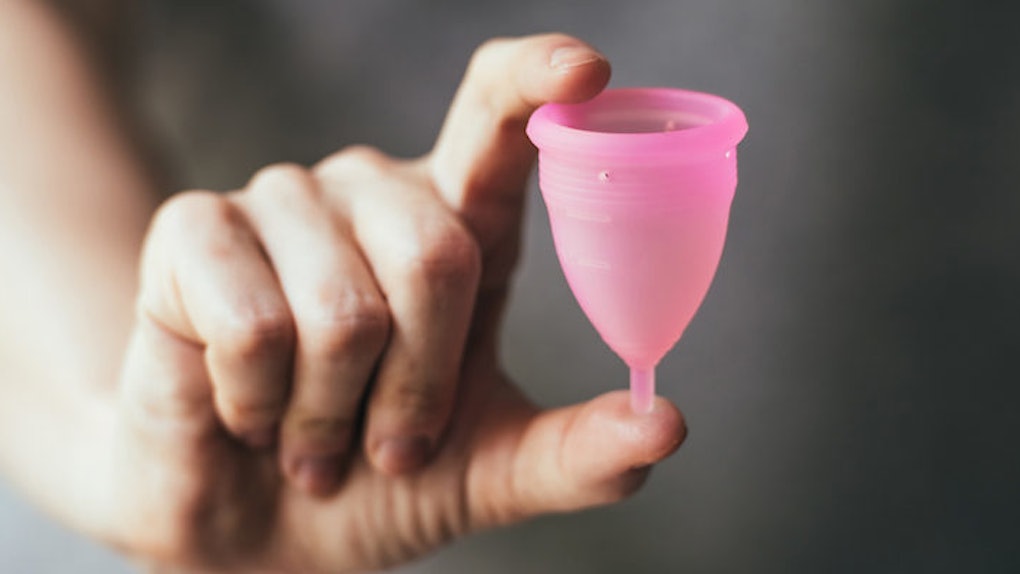 Why Every Woman Should Use A Menstrual Cup

Aside from saving money and reducing environmental waste, menstrual cups, commonly recognized as the "Diva Cup" or Instead Softcup, are the best menstrual products for women because they are chemical-free and provide better leak-protection than tampons and pads.

Join the bandwagon, and get over your self-inflicted “gross” meter. Use the cup, and change your life.

My personal experience with the cup began a few years ago while researching coral reefs in Palau. Mirta, a fellow researcher from Croatia, said, “Clare, do you have a menstrual cup? It’s all the rage in Europe. I love it.

Notice how I never have to worry about my period while on the boat?”

I hadn’t noticed, but then I realized she made a valid point. How did she work while on her period?

We’d spend upwards of eight hours out on a reef, rotating between scuba diving and boat-sitting for a long-term coral experiment.

We worked out of a tiny speedboat, which obviously lacked a latrine.

I wasn’t getting my period at the time due to amenorrhea issues irrelevant to this story, but I realized our work schedule would be almost impossible while menstruating.

If Mirta used tampons instead of a cup, she would’ve had to squat on the four-foot long, slanted boat deck and exchange tampons in the open air, storing her used ones until we got back to shore.

We couldn’t afford to drive back to land just for a tampon switch.

She was so proud of her menstrual cup, as it allowed her to do her job, prevented tons of waste (Being marine ecologists, this is more important to us than most people.) and saved her money.

“I haven’t bought tampons in years. It’s awesome,” she said.

Upon returning to the US, I realized European women were leading the transition from tampons to the menstrual cups.

Mirta’s excitement for the cup was the norm in Europe, but my American friends didn’t know about it or thought it was gross and intimidating.

Fast-forward two years to today: I finally have a normal period, and I am ecstatic to use a menstrual cup and encourage American women to embrace the transition, especially my fellow, active Gen-Yers.

We can go camping without carrying our used, bloody tampons with us. We can sleep 10 hours straight without worrying about staining our sheets.

We never have to stop at a gas station and begrudgingly buy overpriced tampons and then use the bathroom to change out of our stained underwear into clean underwear that will surely also be stained before we’re able to exchange our tampon again.

We don’t have to worry about toxic shock syndrome (TSS) or the toxic chemicals in many tampons that so many of us don’t even know exist.

So, aside from reducing environmental waste and saving money, the cup can positively change our lives and the way we think about menstruation (or don’t think about it).

We put chemicals in our vaginas?

Did you know the tampons and pads you’re using likely contain harmful chemicals?

Synthetic fibers of tampons produce and harbor toxins absorbed by vaginal mucous. And, the ever-feared toxic shock syndrome is linked to these toxins held in such synthetic tampon fibers.

This is true, but all tampons, regardless of material, can create minuscule vaginal tears, which may still allow entry for toxins, including the TSS toxin.

More importantly, cotton blend tampons contain toxins called dioxins. These are environmental pollutants that have the potential to be highly toxic if ingested or absorbed; they are the byproducts of cotton bleaching.

Although one study shows cotton tampons contain very low levels of dioxins, the World Health Organization, the Environmental Protection Agency and women’s advocate groups, such as the Women’s Voices for the Earth, have reported the dioxins in cotton feminine hygiene products, including pads, are still concerning considering their highly toxic potential.

Even a small amount of dioxins absorbed through the vaginal mucous leads directly to the bloodstream.

More alarmingly, tampons and pads have a terrifying lack of regulation.

So, if you don’t have to risk the potential consequences, which include immune, nervous and reproductive system impairment and links to cancer, why use tampons and pads when you can use a menstrual cup?

All brands of cups are made with medical grade silicon, which is free of the previously mentioned noxious chemicals contained in tampons and pads.

The silicon cup merely collects blood instead of absorbing blood and vaginal mucous.

This means that unlike tampons, the blood can neither harbor the toxins that cause TSS, nor can the cup cause micro-tears in the vagina.

Having sex on your period doesn’t have to feel like a slog through the Sahara anymore, and there are no more worries about chemicals entering your bloodstream.

Aren’t you sick and tired of leakage?

The menstrual cup creates a seal in your vagina, preventing leakage that inevitably occurs with tampon use.

Because of the suction of the cup’s rim, it provides unparalleled protection against blood clots from slipping out of your vagina and onto your underwear or clothes.

Combined with the longer time period you can leave the cup in versus the mere hours tampons last during a heavy flow, the cup lets you forget you’re even on your period.

You can empty it in the morning before work and not think twice about staining your pants until dinnertime.

And, the ability to sleep through a night without worrying about leaking onto your sheets can be life-changing for some women.

Of course, women with particularly heavy flows must monitor their collection times and will have to empty their cups out more frequently than every 10 hours, but still, the average cup collects more blood than even the most super-absorbent tampons.

It’s no mathematical conundrum that using a menstrual cup saves you money.

Buying one cup for $30 (a high estimate, as you can purchase many cups at discounted prices in a five-second online search) saves you hundreds of dollars on tampons and pads in future years.

The average woman spends anywhere from $40 to over $100 dollars on menstrual products a year, so using the cup starts your savings in just the first year of use. Cups can last for decades.

The math is simple: The cup provides a considerable cost saving over time.

Don’t you feel guilty for throwing away so many tampons and pads?

According to "Flow: The Cultural History of Menstruation," a woman throws away an average of 300 pounds of feminine hygiene products in her lifetime.

To characterize this statistic, here’s the story of just one used tampon.

A few years ago, I was also researching coral reefs in Bermuda. Immersed in a scientific community of scuba divers and particularly environmentally conscious people, we heard stories every day about marine trash and debris.

But, the most memorable story was about what a scientist saw while diving from a popular beach for a beach cleanup.

Near the beach, a sewer pipe flowed into the ocean, and the scientist saw a sea cucumber with a sail-like appendage on its back.

The scientist finned closer, and she realized a tampon had affixed itself to the back of the poor sea cucumber and algae had grown over the appendage.

It had become a permanent vestige, and other marine debris latched onto the floating string.

Multiply this story by the thousands of tampons thrown away and irresponsibly flushed into sewer drainage systems every year, and you have a lot of sad (and dead) critters.

The environmental reasons for why the menstrual cup outshines tampons and pads needn’t be overwrought.

The habits of adding to landfills, to marine trash, to the "use, use, take, take" mentality of our consumerism-driven culture are bad.

It’s not cool to be wasteful. Reusing a silicon cup is way better.

You think the menstrual cup is gross?

Common complaints and reasons for why women refuse to try a menstrual cup:

“I don’t want to touch or see my blood!” “I would have to shove the cup into my vagina!” “What if I can’t rinse the cup out? Gross!”

Yet, none of these complaints are warranted. There are very few reasons not even to try to use a menstrual cup (and the few are likely medical problems, like auto-vomiting at the sight of blood).

We already stick tampons into our vaginas, and our fingers inevitably touch our lady parts, so inserting the cup is no different.

Shouldn’t we already wash our hands before and after tampon insertion? So, inserting a cup isn’t any different.

Shouldn’t we already properly dispose of our tampons, which often means we get some blood on our fingers and or have to carry tampons until we can throw them away?

So, using a cup is better in the sense we never need to find a trash can. And, if we cannot access clean, running water, no biggie. We can reinsert the cup and will rinse it out the next time we can.

"But the blood," you say? God forbid we touch our own blood!

It’s true we’ll see more of our blood using a menstrual cup — blood isn’t absorbed into a tampon’s cotton womb — but when you think about all of the chemicals in tampons, I’m sure we can agree that the sight of more blood outweighs the possibility of TSS or worse.

As far as touching our blood, well that’s just silly. That’s the whole point of the cup: It holds our blood. We don’t have to scoop our blood out with our fingers; we merely pour the cup out.

We can skip numerous annoying and harmful aspects of tampon and pad use while developing modern, practical and exciting new relationships with our periods by using a menstrual cup.

Start your search for the perfect cup now.