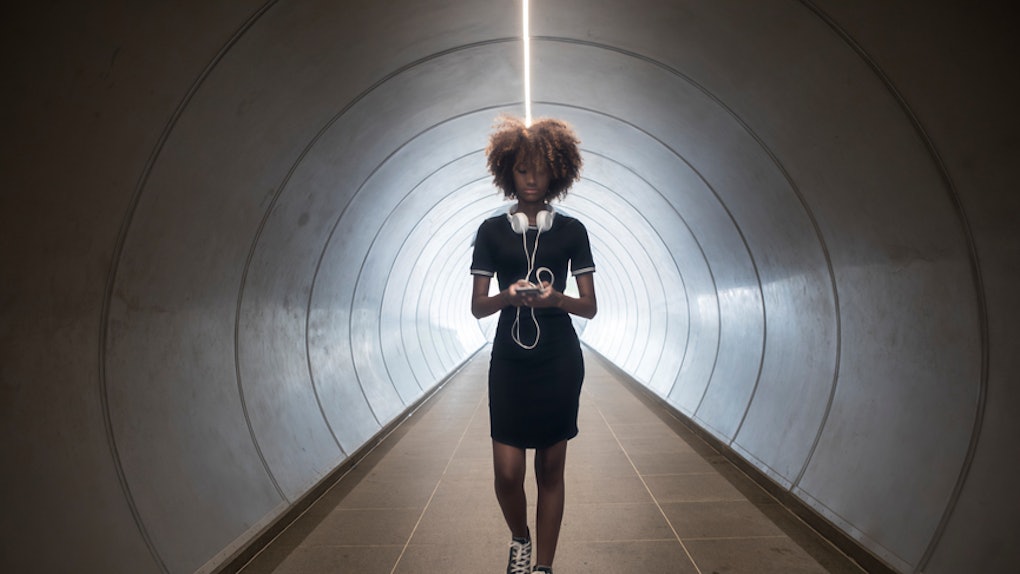 How Noise Pollution Affects Your Health When You Live In A Big City, According To Science

When you live in a big city, you tend to pay attention to some stuff, and totally ignore all the other stuff. You might notice all of the packages getting stolen from your stoop, for instance, or how freezing cold your apartment is from all of those drafty windows, but you might not even realize how loud your bedroom is every night when you're trying to sleep, or the way your ears sometimes ring after coming up to the street from the booming subway tunnel. Recognizing how noise pollution affects your health, even in the little ways, is pretty important, especially if it's something that's keeping you up at night, or otherwise hurting your well-being beneath the surface.

To be clear, noise pollution doesn't just refer to car horns and screaming drunk people. The Environmental Pollution Centers define noise pollution as "regular exposure to elevated sound levels that may lead to adverse effects in humans or other living organisms," and that can refer to construction noises, loud music, fireworks, and airports — not to mention domestic noises, or the subtle, yet disruptive sounds that are kind of constant in your personal, everyday life, even though you may not always notice them.

In 2018, your domestic noises can be nonstop. You're dealing with constant noises from cell phones, laptops, and televisions from within your own safe haven — and yes, a jarring vibration from your smartphone counts as a noise, people. So when you take into consideration all of the abrasive sounds you're dealing with every day (and potentially even deep into the night), it might start to make sense that noise pollution could be every bit as real of a threat as literal smog pollution in big cities.

With all that in mind, it appears people are finally starting to pay attention to ways in which noise pollution is actually affecting them, and it seems like they're not stoked about it.

According to Women's Health, internet searches for "silent retreat near me" increased by over 500 percent in the last year.

And no, it's really not just a coincidence. Bart Kosko, Ph.D., a professor of electrical engineering and law at the University of Southern California, spoke to Women's Health about the long-term dangers of noise pollution, which can potentially include brain damage, heart damage, and hearing loss, all due to the constant stimulation of the fight-or-flight reflexes that your body triggers in response to sudden noises.

Again, noise pollution, according to the Environmental Pollution Centers' definition, means being around constant, elevated noises that may have a detrimental effect on your mental or physical well-being. It's pretty easy to see how this can compound into something overwhelming when you live in an urban, big-city area. In fact, noise pollution was recognized by the Environmental Protection Agency (EPA) under the 1990 Clean Air Act, with amendments promoting noise moderation and monitoring in urban areas. The EPA cited the potential negative health effects associated with noise pollution, the primary one being hearing loss.

But hearing loss isn't the only symptom that results from constant noise pollution. According to England's chief pollution officer, professor Dame Sally Davies, light and noise pollution can contribute to chronic sickness, as well as an increased likelihood for disease. Although her reports are preliminary, it's inevitable that more studies will be conducted in the near future, as noise pollution is at an all-time high in many parts of the world.

So where does that leave the rest of us? For most people, it's not necessarily an option to leave the city that they're living in, given that cities tend to hold a higher concentration of job opportunities.

If you want to minimize the effects that noise pollution may have on you, there are a few little steps you can take in your everyday routine.

The most obvious thing you can do to lower your own exposure to noise pollution is to reduce the sounds that you can personally control in your universe. For example, on your phone, you don't need to keep all of the notifications on, at all times. One small step you can take here is to turn off alerts for, say, your social media channels, and then gradually go from there. Eventually, you could make it a point to turn your phone to silent mode for a few hours every day, just to have one less thing vibrating and making noise all the time.

What's more, you could start introducing more peaceful, silent activities into your life if you haven't already, like reading, writing and meditating, which might help you unwind more at the end of the day than listening to music or turning on Netflix.

As for the outside universe, noise-cancelling headphones are nothing short of a blessing, and perhaps you can consider swapping that Coachella ticket for the nearest silent retreat. Just a thought.

More like this
These 40 Clever Vaccine Selfie Instagram Captions Deserve A Shot On Your Feed
By Rachel Chapman
7 TikTok Recipes Using Ramen To Make Lasagna, Pizza, Smoothies, & More Treats
By Kelly Pau
The Mythical Creature You Are, According To Your Zodiac Sign
By Roya Backlund
Stay up to date