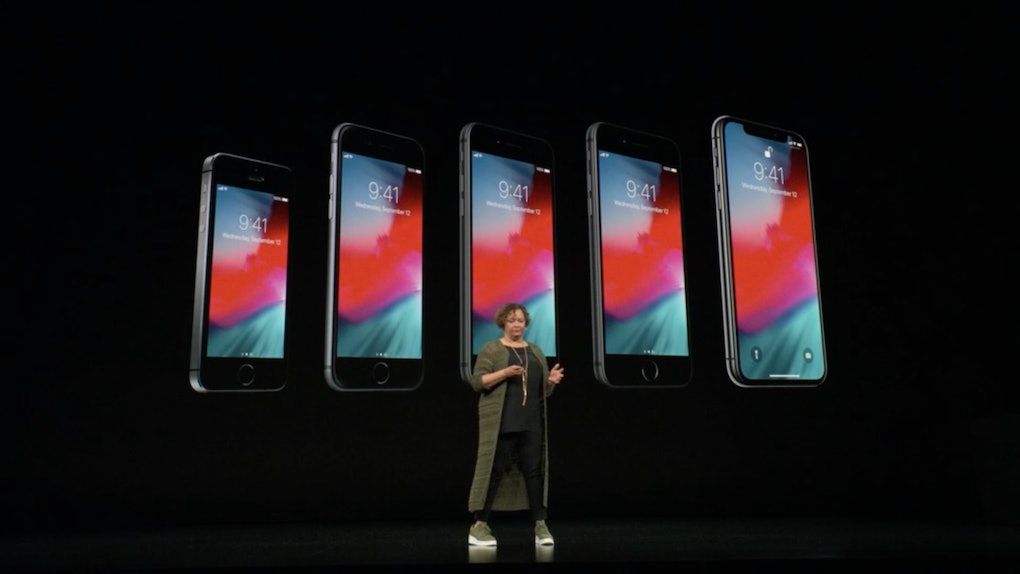 How Much Will The iPhone XS Max Cost? You'll Want To Save Up For This

The highly-anticipated iPhone XS Max, which includes a host of cool, new features, finally made it's debut at an Apple event on Sept. 12. That means one thing: you want it now. But let's be honest, iPhones have never been cheap, so you're probably already a little on the fence about moving forward with purchasing a device of your own. If you've been saving up, though, the price of the iPhone XS Max won't break the bank too badly — I mean, comparatively speaking. With that being said, those wondering how much the iPhone XS Max will cost should keep on reading for all the details. And if you upgraded your phone in 2017, you might be even more pleased to know that the new iPhone isn't too far off from the cost of last year's iPhone 8 Plus.

The iPhone XS Max will start at $1099, which is definitely a chunk of change, but all things considered, not too hefty for Apple's latest. In fact, that's only $100 more than the cost of the iPhone X's $999 price tag when it debuted in 2017. When you consider all the fancy perks Apple added to the latest iPhone, it might seem worth the few extra dollars.

For starters, the iPhone XS Max has a giant 6.5-inch screen. According to Bloomberg, that's about an inch larger than the iPhone 8 Plus, thus allowing users to really have a theater-like experience when using apps like Netflix or Hulu. It also offers extra comfortability for owners who enjoy reading books, combing through social media, or doing work on their phones, for example.

What's more, the devices come in a slew of stunning colors, including Space Gray, Silver and a new Gold (yessss). You can also look forward to having a phone with a sleek, polished look that you can show off to all your friends, because why not?

Aside from the cosmetics, the Max also comes with some exciting features. There's FaceID, which was introduced with last year's iPhone X. If you're not aware, the feature allows owners to unlock their phones with their faces rather than using their fingerprints or a code to do so. IDK about you, but I'm already sensing that that's gonna be my best friend when I'm lying in bed on Netflix, too cozy to move and fidget with my passcode.

But TBH, I'm personally excited about Memojis more than anything. All the latest generation of iPhones will be running iOS 12, which allow users to play with everyone's new favorite feature, Memojis. The animations can be applied to photos, texts, and even FaceTime, which means conversations with all your friends and family members are about to get a lot more fun.

That said, if you're ready to pounce and grab your iPhone XS Max, they'll be available for pre-order on Sept. 14 You'll simply have to head on over to Apple's website or the website of your phone service carrier, put in the kind of phone you want and voilà! It should be at your doorstep before you know it.

Here's hoping that it's worth it's worth the cash. Sounds like it is to me!