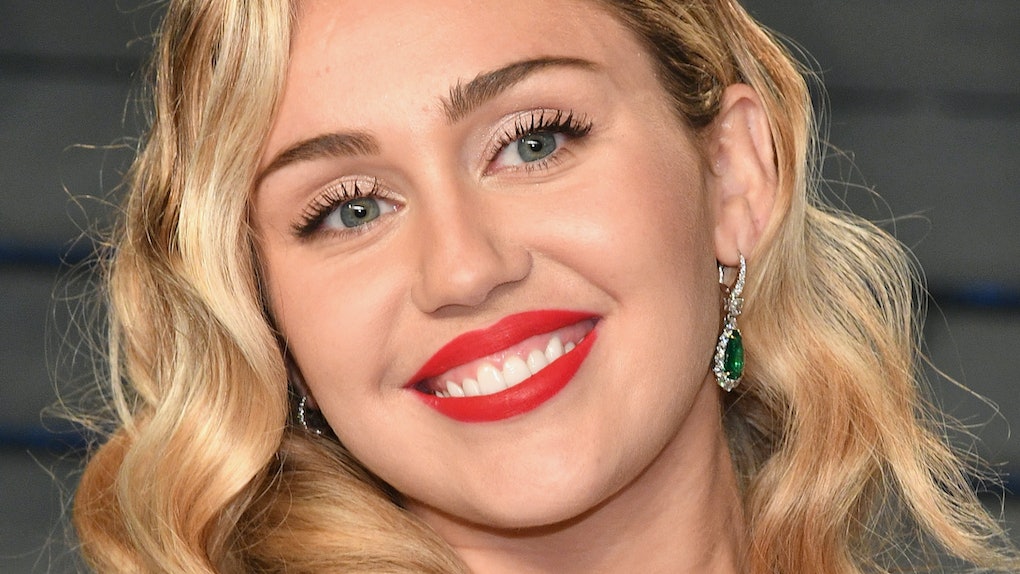 How Much Is Miley Cyrus x Converse? The Sneakers Cost Less Than A Party In The U.S.A.

Miley Cyrus is coming in like a wrecking ball — to ensure our shoe game is top notch this summer. After she teased her Converse collaboration with an Easter-themed photo shoot, Cyrus' fans have a release date and price range for the sneaker drop. How much is Miley Cyrus x Converse? More affordable than you may think.

Back in November 2017, Cyrus teased that she would be working with Converse to release an exclusive collection. Then in February 2018, she modeled pieces of her full line in a Valentine's Day-themed shoot. I almost couldn't breathe because Cyrus was designing the shoes of my dreams. Even though she stated that they were "coming soon," I'm a bit impatient and soon wasn't soon enough. The line will feature glitter Chucks, high tops, low tops, and platform-designed Chucks. If her mini holiday calendars are any inclination, this line is going to make you want to hop all over town.

In an exclusive interview with Vogue, Cyrus shared that her holiday photo shoots were a bit planned, even though they appear spur of the moment. Cyrus is known for her eclectic fashion sense, but she loves stepping outside the box.

It started with Valentine’s Day on a shoot with Ellen von Unwerth, went into St. Paddy’s Day partying with some friends, and now it’s Easter.

If everything is cute... it works together, so pile it on and wear all your favorites at once! No such thang as too much!

Captured by photographer Vijat Mohindra, the shots feature the "Malibu" songstress wearing super girly outfits. In some of the photos, she's wearing a frilly pink gown, and in another, she's wearing a white, off-the-shoulder dress. The photos are an Easter dream, but it's her shoes I immediately zeroed in on. In the shoot, Cyrus teased her Converse collaboration oh-so-subtly. In the photo, Cyrus is wearing a pair of white Converse with glitter laces. And if pink and glitter aren't your thing, Cyrus is also releasing two black pairs of Chucks.

Overall, the engaged songstress hasn't released the official lineup of shoes, but after the release of sample images, it's clear the Chuck Taylor silhouette is receiving an update.

The Not Your Average Scene Kid Chuck Taylor

You can tell that Cyrus put a lot of thought into this collection. Every scene kid would have been quaking in their Vans if you came to school with these on. Between the glitter laces and platform heel, a My Chemical Romance soundtrack needs to play every time you wear this pair.

The Cinderella Of Chuck Taylors

If Cinderella wore these to the ball, she definitely wouldn't have lost her shoes, but then she would have never found Prince Charming. Regardless, I think she still would have caught his eye with this sparkly sole. These are my favorite pair I've seen thus far. Look out Dorothy; ruby slippers were so last year.

The Lizzie McGuire Of Chuck Taylors

I'm not ashamed to admit that I'm basically Lizzie McGuire in 2018. I can't get enough of these sneakers. Between the platform, glitter sole and millennial pink shoe color, Kate Sanders would be beyond jealous of these sneakers.

The bandana detailing on this shoe screams California to me. Unfortunately the line won't be out in time for Coachella, but I would definitely rock these the rest of festival season.

Tapping Cyrus to update an iconic shoe is genius, especially since she's known for her outlandish style. I'm interested to see if there will be more colorways added to the collection. When it comes to this collection though, the most difficult part will be deciding if you want a high or low-top Chuck Taylor.

The Miley x Converse collection is set to launch on May 3, with prices ranging from $65 to $70, so I know where I'll be before Cinco De Mayo.