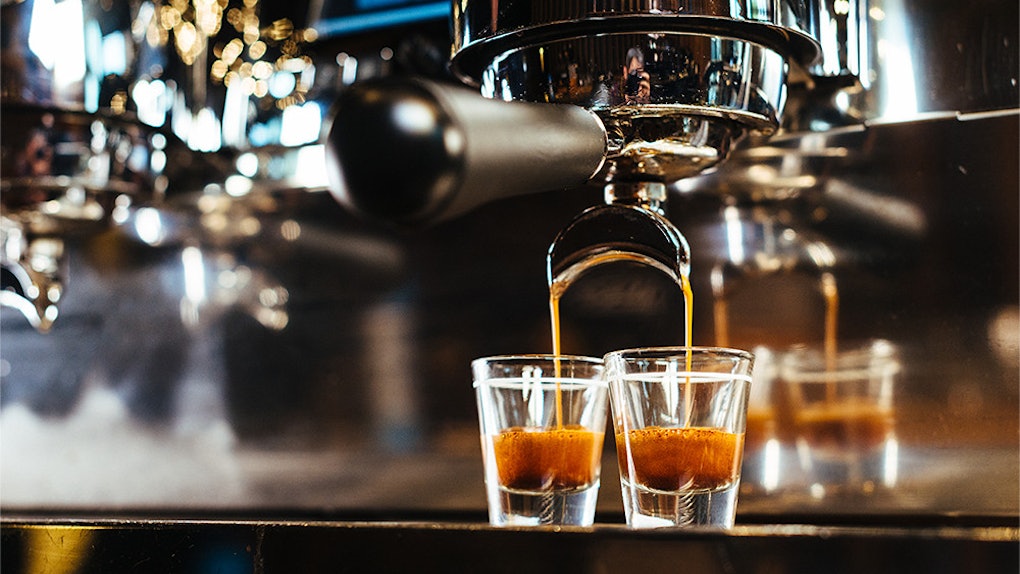 How Much Caffeine Is In Starbucks' Blonde Espresso? Don't Let The Name Deceive You

Regardless if you're a coffee drinker or if you somehow manage to abstain, you've probably heard the latest Starbucks news about the new sensation that is the Blonde Espresso. Starbucks fans and caffeine addicts nationwide are going nuts over the first new espresso to hit the green shelves in over 40 years, which has been pleasing those who crave just a few extra sweet notes in the morning. But since it's lighter than its dark roast counterpart, many are wondering if the Blonde gives drinkers less of a buzz than the regular espresso. Well, we've actually discovered just how much caffeine is in a Starbucks Blonde Espresso, and the answer will probably surprise you.

Many are happily — and quite aggressively — guzzling that sweet little shot of Blonde Espresso, while others are anxiously twiddling their thumbs and waiting to get their hands on it. There are definitely a few coffee drinkers out there — myself included — who are a tad skeptical to try this sexy new variation. We are (validly) worried that a lighter version sounds like it would have less caffeine. So... is this true? We need answers ASAP. Since it doesn't contain any additional milk products or water, why would this be true? Is the type of bean used less powerful than others? We were surprised when we learned the answer, and it'll definitely shock you.

The Blonde Espresso shot is made with delicately and lightly roasted Latin American and East African beans. Those who try it claim that it tastes much lighter, smoother, and less bitter, than the dark roast. With delicious tastes of citrus (orange and lemon, supposedly), as well as hints of sweet caramel, the Blonde is simultaneously refreshing and super smooth. Although the Blonde is technically a lighter roast, (aka, you don't have to add as much cream and sugar to make it drinkable and tasty), it has the same amount of caffeine as its original dark roast espresso counterpart, aka Starbucks Signature Espresso. According to Starbucks' ingredient page for the bev, it has approximately 225 mg of caffeine.

That's insane, right? It totally isn't the answer we expected, but there's no doubt in my mind that we're about to be the next biggest fans of Starbucks' Blonde Espresso. Yum.

If you're not down to do straight up shots of espresso first thing in the morning, (because that honestly sounds like literal hell), you can order a wide variety of drinks with a shot of Starbucks' Blonde espresso. This might be the best news I've heard all day, because no matter how sweet that little cup is, there is literally no way you can get me to throw back a plain single shot of concentrated hot bean water. But between the Blonde Vanilla Latte, Blonde Flat White, Blonde Espresso Macchiato, and the Blonde Iced Americano, there are so many amazing ways to try that little taste of Blonde deliciousness. And since it's apparently super sweet and summery, many agree that it tastes best in a frozen or iced beverage. And, as an iced beverage aficionado, that sounds freaking amazing. Since there are so many fantastic ways to try it, I'm pretty much obligated to try it in some way, shape or form, at this point.

So despite the incorrect allegations that Starbucks' Blonde Espresso has less caffeine because of its smoother taste and lighter color, it actually has the same amount as Starbucks' Signature Espresso. But since the Blonde tastes smoother (and still gives a mad powerful buzz), it sounds like the perfect drink. Whether you decide to have it cold or hot in a latte, it doesn't sound like there's any wrong way to approach it... because let's face it, "blondes do it better."