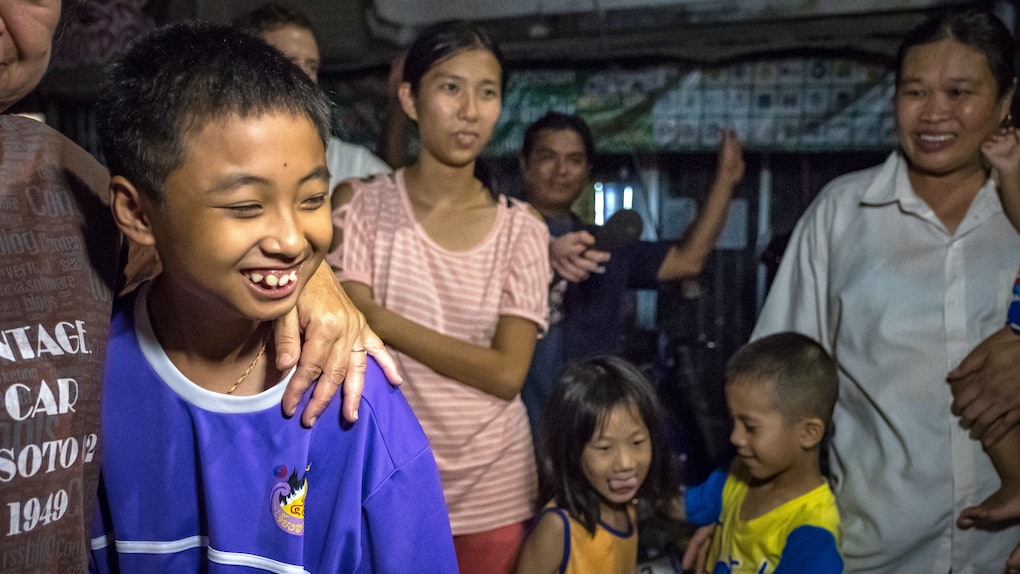 There was a huge sigh of relief heard around the world when a soccer team of 12 young boys and their coach, Ekapol Chanthawong, were rescued from a cave in Thailand's Chiang Rai province. After exploring the caves during an afternoon bike ride, they were trapped inside by monsoon floodwaters for several days. Relief efforts began immediately, and while Navy SEALs were able to reach the boys, they couldn't safely remove them; it was a group of British cave-divers who were eventually able to accomplish the rescue effort. While the experience was undoubtedly harrowing, meditation may have helped the Thai soccer team survive while in the cave with their coach, according to the Associated Press. Kind of amazing, right?

Per the AP, 25-year-old coach Ekapol Chanthawong spent 10 years living as a Buddhist monk before becoming a coach for his soccer team, the Wild Boars. According to the news outlet, Chanthawong continues to visit the temple where he lived on occasion. It was there that he learned and began his practice of meditation.

The coach's aunt, Tham Chanthawong, told the AP that when Ekapol and the boys were still in the cave, she knew his meditation practice was undoubtedly being put to good use, given what an exceptionally frightening and dire situation they were all in.

"He could meditate up to an hour," Tham told the AP. "It has definitely helped him and probably helps the boys to stay calm."

According to The Washington Post, a monk from the coach's once-frequented temple also sent him a letter of guidance to help him and the team keep their spirits up while they were still trapped in the cave. The letter from Chanthawong's mentor read,

Be patient. Try to build your encouragement from the inside. This energy will give you the power to survive.

Navy SEALs' video footage from the inside of the cave, which they captured while delivering supplies to the soccer team, also showed that the young boys themselves remained relatively calm, and even jovial at times which, to me, is practically unbelievable. From an outside perspective, keeping a positive attitude of any kind seems virtually impossible in such terrifying circumstances, thought it certainly makes sense that practicing mindfulness — which, according to the American Psychological Association, can help reduce stress, regulate emotions, and even temper feelings of fear — or taking such a cue from the temperament of their coach, would help the young boys stay calm.

Aisha Wiboonrungrueng, a mother of one of the young boys trapped in the cave, told the AP she believed that the boys' soccer coach was a major influence in keeping the boys in a state of ease. When describing a video of the rescue efforts, Wiboonrungrueng said,

Look at how calm they were sitting there waiting. No one was crying or anything. It was astonishing.

But it wasn't just the boys' emotional well-being that might have benefited from the coach's meditation practice.

Because oxygen levels were significantly low inside the cave, dipping below 15 percent at one point according to The New York Times, meditation might have also provided physical benefits that allowed everyone's bodies to better handle the difficult environment. A meditation expert from Stanford University, Leah Weiss, told CNBC that the side effects of meditation, which include a slower heart rate and breathing pattern, might have been a major factor in maintaining physical stamina and keeping the boys alive. Weiss told CNBC,

Given that insufficient air and food was a major issue for the trapped boys, meditation is actually a very practical response to both of these concerns.

She also explained that, when you slow down your heart rate and breathing through meditation, it can simultaneously help decrease cortisol (aka stress) levels in the body, which were undoubtedly running high for everyone involved in these scary circumstances.

And, from a mental standpoint, Weiss explained, the boys' "cognitive resources," like the ability to problem-solve, could have easily been "hijacked" by the anxiety and panic they must have felt in this situation. The practice of meditation and mindfulness, she told CNBC, likely allowed the boys and their coach to maintain these problem-solving abilities, as well as a calm perspective.

Honestly, if that's not reason enough to start your own meditation practice, then what is? Either way, it can't be said enough how incredible it is that the boys and their coach are all safe and sound.