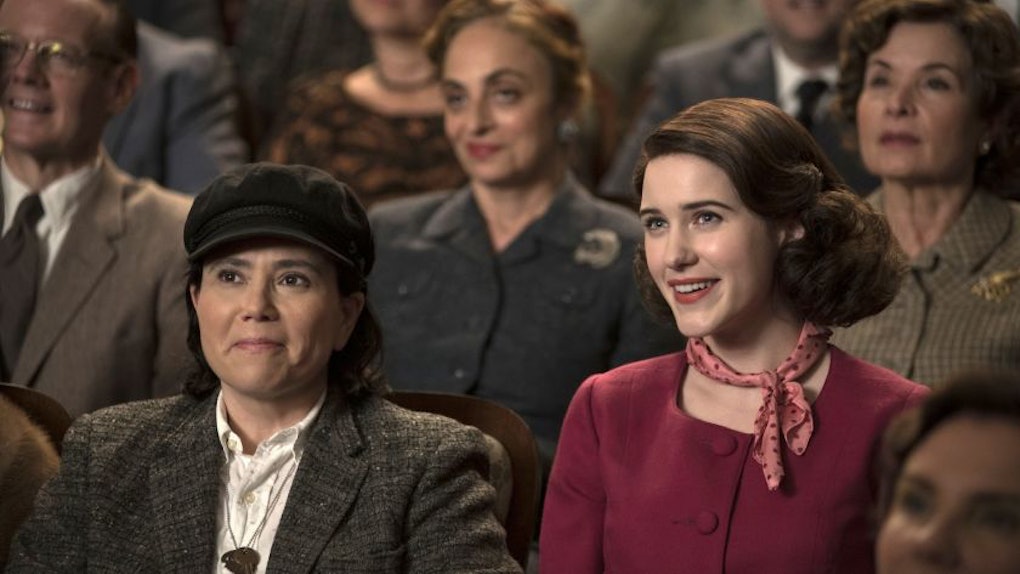 How Many 2019 Emmys Did 'Marvelous Mrs. Maisel' Win? Fans Are Thrilled

Ever since The Marvelous Mrs. Maisel premiered on Amazon in 2017, it's been a huge hit among both critics and fans. It makes sense why, thanks to the breakneck speed of the show's deluge of jokes, heartfelt emotional beats, and impeccable 1950s-era period details. That's all on top of the super talented cast and crew, so it's no wonder that Maisel has a history of cleaning up pretty well at TV's biggest award ceremony. How many 2019 Emmys did The Marvelous Mrs. Maisel win? It's eight wins are making fans pretty happy.

Going into the Sept. 22 broadcast of the 2019 Emmy Awards, Maisel was already a frontrunner thanks to its six wins at the Creative Arts Emmy Awards, which took place on Sept. 14 and 15. The series took home trophies for both Jane Lynch and Luke Kirby's guest role performances, as well as awards for costumes, cinematography, hair styling, and music supervision. With a total of 20 nominations this year, Maisel racked up the most of any comedy series.

During the Sept. 22 show, Tony Shalhoub was the first among the Maisel cast to win for his supporting role as Midge Maisel's dad, Abe Weissman. When he took the stage to accept his award, he admitted he was in "a bit of a quandary." He doesn't like speeches that ramble on thanking everyone involved in a show, but "it truly does take a village." He then went on to jokingly thank the show's creators Amy Sherman-Palladino and Daniel Palladino over and over, pointing out how entrenched they are in every part of Maisel's creation.

Alex Borstein, who plays Susie Myerson, won the award for Supporting Actress in a Comedy Series for the second year in a row, beating her co-star Marin Hinkle. After she took a shot with Seth McFarlane in the audience, she made her way to the stage. Borstein's speech was a beautiful mix of funny and heartfelt. All in the same speech, she both apologized for not wearing underwear to the show and dedicated the award to the strength of women. She remembered her grandmother, who stepped out of a line during the Holocaust and survived, and encouraged all women to "step out of line."

Even though she won last year, Rachel Brosnahan, who plays Mrs. Maisel herself, lost the Emmy award for Lead Actress in a Comedy Series this year. Both Sherman-Palladino and Palladino also lost their nominations for Directing for a Comedy Series. When it came time to the award for Outstanding Comedy Series, Maisel lost once again, this time to Fleabag.

Hopefully Maisel will be back to claim more Emmys next year. Season 3 of The Marvelous Mrs. Maisel premieres on Friday, Dec. 6, on Amazon.