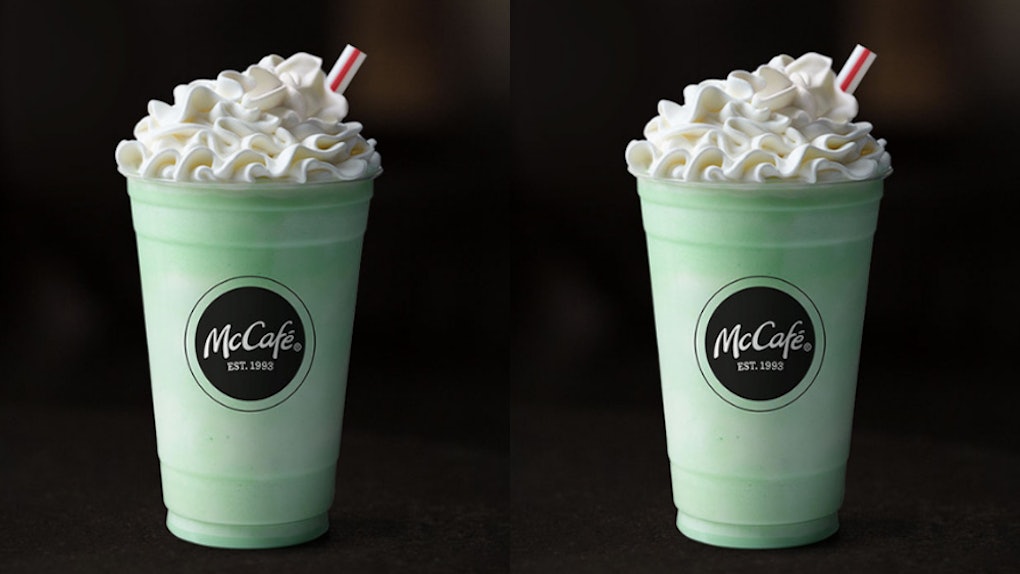 How Long Will McDonald's Shamrock Shakes Be Available In 2019? Don't Wait Too Long To Sip

Whether you like it or not, Valentine's Day is officially in the past (boo), and Shamrock Shake season is upon us once again, at long last. *Cheers.* That's right, my fast food-loving babes — McDonald's has finally brought back its famous green milkshakes about a month before St. Patrick's Day, which falls on March 17, 2019. So it goes without saying that I'm totally stoked. And since you're probably wondering: How long will McDonald's Shamrock Shakes be available? I did a little digging. Stay tuned.

If you didn't hear about the Shamrock Shake's glorious return from me, you most likely heard about it from Twitter. Seriously, the online community of McDonald's enthusiasts are straight-up thrilled right now, and TBH, so am I. And since you're most likely here to find out how long the Shamrock Shake will be around this year, let me be the one to tell you that you have a little over a month to enjoy the minty favorite.

As you probably know by now, nothing gold (or green, for that matter) can stay, and the classic Robert Frost poem totally applies to the Shamrock Shake. According to the McDonald's website, you will only be able to get your hands on one through March 24, while supplies lasts, which is only one week after St. Patrick's Day, and a little over a month from right now. And although I wish the creamy drink would stick around forever, having a little over four weeks to stock up isn't so bad, right?

While planning your trip to the popular chain restaurant, keep in mind that the beautiful and precious gem known as the Shamrock Shake is only available at participating Mickey D's locations, according to the McDonald's website. And if you aren't entirely sure where you will be able to get yours, enter your zip-code into the online McFinder beforehand. This glorious piece of technology will actually list all nearby locations that sell the highly-elusive beverage, so you won't have to worry about embarking on an unsuccessful Shamrock Shake run. Don't worry, y'all — I've got your back.

Maybe you've never had the chance to try a McDonald's Shamrock Shake before, and if that's the case, let me be the first to say, "I am sorry for your loss." Luckily, though, it's never too late to get one (unless you decide you want one after March 24). Anyway, there are various myths speculating that the famed milkshake consists of leprechaun sweat, tears, or luck, but that's definitely not the case. Basically, the Shamrock Shake tastes like a classic vanilla milkshake, with an added hint of refreshing peppermint. It's honestly so tasty, and it looks like 2019 is going to be your year to try it. So, definitely get on that before time runs out.

Regardless of what your 2019 goals are (or were, if you didn't stick with them), getting a taste of one of McDonald's Shamrock Shakes should most definitely be one of them. You literally have over a month before they disappear from menus for yet another long year, so make sure you make your way to Mickey D's before your time runs out. The mere thought of not getting one in 2019 is so haunting. In fact, it would be super unlucky, if you ask me.