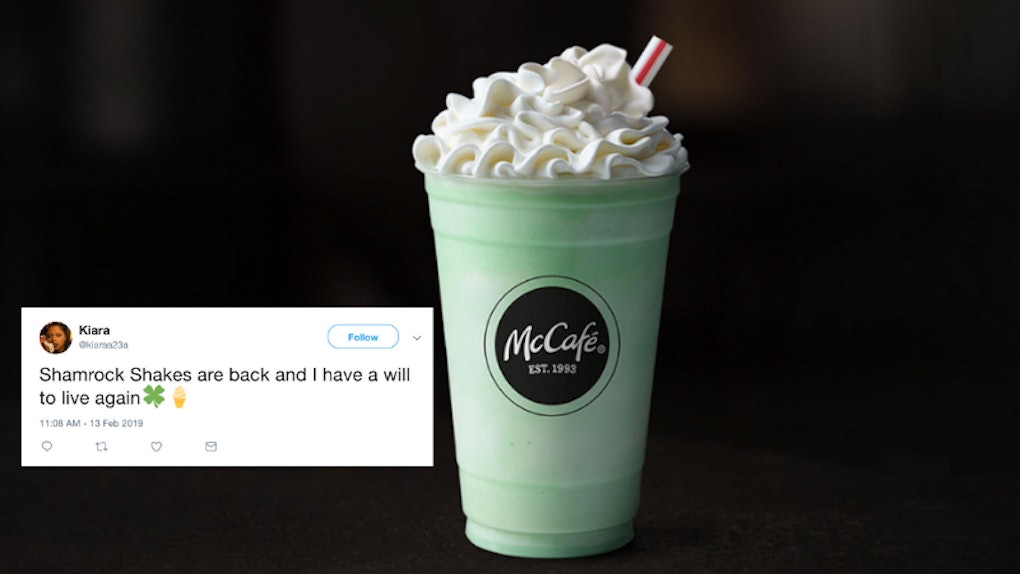 These Tweets About McDonald's Shamrock Shake Coming Back For 2019 Are So, So Hype

It's officially Shamrock Shake season, people, and no one is even pretending to have chill about the fact that the Golden Arches' green-hued sips are back on menus. Considering that the mint green milkshake traditionally ushers in St. Patrick's Day and the unofficial beginning of spring, it's not surprising that these tweets about McDonald's Shamrock Shake coming back for 2019 are so here for the cult beverage's return. It's been a long hard winter, and there's nothing like an icy cold shake to celebrate the fact that we're probably through the worst of it.

According to the McDonald's app and a post on Twitter, the Shamrock Shake is currently available at participating locations nationwide, which means that you should definitely be canceling any and all after-work plans and making a beeline straight towards your nearest Mickey D's. Per the app, the green-colored beverage is available through Sunday, March 24, which means that you can keep the St. Patty's Day festivities going a week after the official day of celebration.

Anyone who's tried it knows that a Shamrock Shake is basically a mint lover's dream in dessert form, so it's not surprising that the Twitterverse is freaking out over its return. In case you needed to refresh your memory (it has been a whole year since we've had the seasonal sip, after all), here's what to expect with each sip of the minty confection. First, each Shamrock Milkshake starts with a base of vanilla ice cream, which is blended with pumps of mint-infused Shamrock Shake syrup to give the drink its green hue and its trademark flavor. The festive beverage is then topped off with layers of fluffy whipped cream for a dessert-inspired treat that's sure to satisfy your sweet tooth without making you want to take a nap afterwards.

Needless to say, the internet is having some serious ~feelings~ over the return of the customer-favorite offering. The Shamrock Shake is basically the Pumpkin Spice Latte of springtime, and people can't handle it.

Forget the fact that Valentine's Day is on Thursday, because now St. Patrick's Day is the one and only holiday on my radar. The Shamrock Shake pretty much deserves a season to itself.

Customers aren't letting icy roads, mountains of snow, or a lactose intolerance get in the way of them enjoying the minty shake ASAP, so I'd suggest running, not walking, to your nearest McDonald's to make sure you get some as well.

Because, let's be real, there's nothing quite like when that minty fresh taste first hits your tongue.

'Tis the season to get your minty fix, and it's a welcome reward after surviving the brutal Polar Vortex and the dark and confusing time that was 2018. Before you head out the door, however, make sure to download the McDonald's app and check to make sure that your nearest Mickey D's is offering the seasonal sip, then go and order one (or three) of these bad boys. Shamrock Shake season is only around for a limited time, y'all, so there's no reason not to take advantage of it while you can.